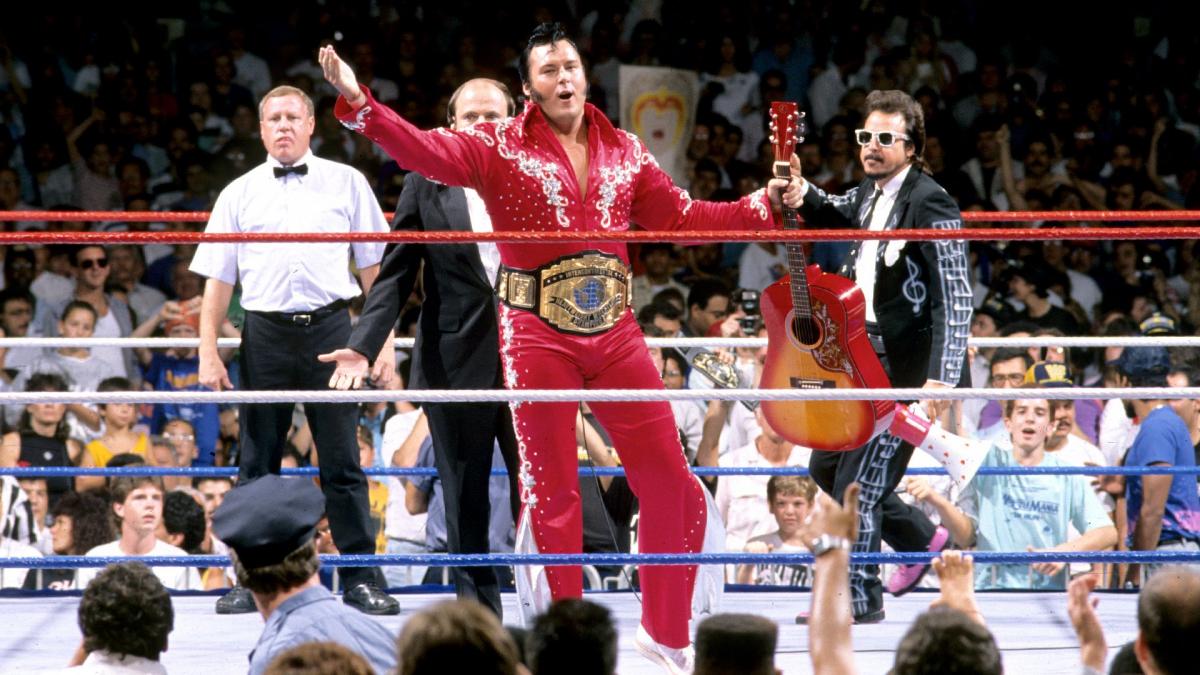 If you were to make a short list of former WWE Superstars who are not yet in the WWE Hall of Fame, but are deserving of the honor, there’s a good chance The Honky Tonk Man would be on that list.

However, his name will no longer be missing from the growing Hall of Fame as he will be inducted during WrestleMania 35 weekend. It will be a long-awaited and deserving honor.

The in-ring career of Wayne Farris, better known as The Honky Tonk Man, dates all the way back to 1977. He wrestled all over the country and was in the business for nearly a decade before WWE came calling, finding great success in the old Memphis territory.

He actually began his WWE run in September 1986 as a babyface with the look of an Elvis impersonator. However, it wouldn’t take long for him to turn into a highly disliked heel, managed by Jimmy Hart.

You know a heel is doing his job well based on the level of boos he receives from a crown and in that regard, Honky Tonk was almost unmatched. In fact, an argument can be made that he was the company’s best heel at times.

He worked his way into that spot through some great matches and solid feuds.

His first major feud came against Jake Roberts and though it culminated at WrestleMania III, it included a now infamous segment on Roberts’ Snake Pit talk show.

Though that guitar shot was obviously planned, Roberts has claimed in interviews that the guitar wasn’t gimmicked properly and that the long-term effects that followed were instrumental in his dependence on pain medication, a claim Honky Tonk Man vehemently disputes.

The match still took place at WrestleMania, with Honky Tonk Man picking up the win.

Honky Tonk then used the momentum from this to land a run as Intercontinental champion later that summer when he defeated Ricky Steamboat for the title.

Being the self-proclaimed “greatest Intercontinental champion of all-time” is what he is probably best remembered for during his time with the company and though that was part of his schtick, there are many fans who believe he actually was the best.

His “Cool, Cocky, Bad” theme song, which was actually sung by him, fit him perfectly and gave his character that much more personality.

That is largely due to the fact that to this day, his 454-day reign as champion is still the longest in history. It was certainly a memorable reign as well as Honky Tonk faced the likes of Bruno Sammartino, George “The Animal” Steele, Randy Savage and Brutus “The Barber” Beefcake while he was the champion.

But at SummerSlam in 1988, his record-long reign would end in record time. Originally scheduled to face Beefcake for the title, Honky Tonk Man found himself going against a mystery opponent when Beefcake was removed from the match.

He grabbed a microphone and said it didn’t matter who his opponent was which of course, set the stage for a big moment. The Ultimate Warrior ended up being that opponent and he beat Honky Tonk Man in 31 seconds to win the title.

Though he competed in WWE for many more years, he would never win another title.

In 1989, he and Greg Valentine would combine forces to form a tag team known as Rhythm and Blues, with the usually serious Valentine dying his hair black and pretending to be musically gifted along with Honky Tonk Man.

The team drew plenty of heat from the crowds it performed in front of, but found little success in the ring and were usually used in the role of putting over one of the teams up the card.

At the 1990 Survivor Series, he and Valentine were part of Ted Dibiase’s “Million Dollar Team”. That was another historic moment in wrestling as the fourth member of that team, billed as a mystery partner, ended up being the debuting Undertaker.

He left WWE in 1991 and resurfaced in WCW about three years later. He wrestled Johnny B. Badd for the Television Title but quickly disappeared after being fired by Eric Bischoff, a transaction Bischoff called his most satisfying firing in his book, Controversy Creates Cash.

He would then return to WWE in 1997 first as a color commentator and then as the manager of Billy Gunn who had been repackaged as Rockabilly, a forgettable role for both men.

He would make sporadic appearances at WWE shows in the years that followed, including challenging Santino Marella for the Intercontinental title at Cyber Sunday in 2008 after being voted in by the fans.

He presented Koko B. Ware into the Hall of Fame in 2009 and has been offered a spot in the Hall of Fame before but rejected the offer. It is unclear what changed his mind and made this the right time for him.

Throughout the years, Honky Tonk Man has appeared at hundreds of shows on the independent circuit and is one of the most recognizable stars from the past that the industry has to offer.

He recently turned 66 years old but as recently as 2016, was still competing in the ring. He is also a first cousin of Jerry “The King” Lawler.

What makes him a Hall of Famer?

The Floor Seat would like to congratulate Farris on his well-earned induction into the WWE Hall of Fame.