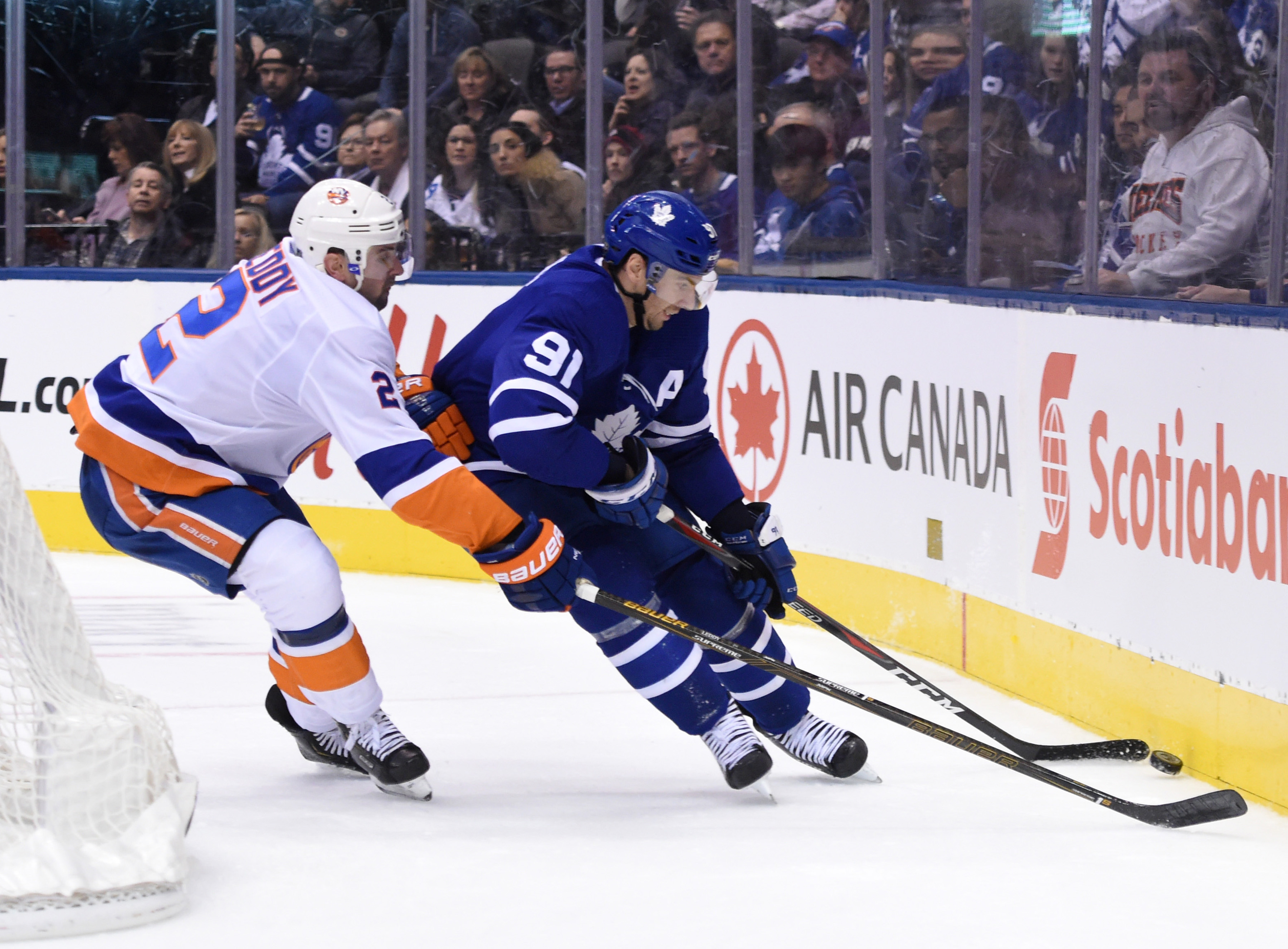 EAST MEADOW, N.Y. — Islander forward Matt Martin has been in the NHL for 10 seasons, but he couldn’t recall anything quite like the lead up to John Tavares’ return to Long Island on Thursday.

Thursday’s showdown with Tavares and the Toronto Maple Leafs has been circled on many fans’ calendars for some time, really since the announcement in October that the game would be moved from Barclays Center to the Nassau Coliseum. Since then, the hype has built up and this week hit a fever pitch.

“It’s a little unique because I don’t think it’s too often that star players, I guess, leaves,” Matt Martin said prior to Thursday’s game.

The Nassau Coliseum is expected to be even more hostile than ever with the return of the Islanders former captain, who bolted for Toronto via free agency on July 1. The fans have remained angry over the way Tavares departed the team last summer.

And the 13,917 fans that will pack the Nassau Coliseum are expected to boo the former Islander right from the jump.

“Fans are able to feel how they want to feel about it,” Martin said when asked about the fan reception. “I think obviously they’ll make it hard on him tonight, but John is a hell of a player and he had the right to do what he did. That’s the decision that he’s made for himself and his family, and I think as a team we’ve moved on from that.

“We’re just focused on ourselves and winning hockey games.”

I guess tonight is a big deal or something? #Isles pic.twitter.com/RBR6Gv9e6u

For others, the circus around Thursday’s game has been a bit surprising. The Islanders morning skate was heavily attended by the media, which on a normal day consists of only a handful of reporters.

As the media entered the Islanders dressing room, Johnny Boychuk joked about the size of the contingent there for the day.

Tavares’ return had been the headlines even as the Islanders hosted the Calgary Flames on Tuesday. Tavares himself had been asked about it on previous trips to the area to play the New Jersey Devils and New York Rangers.

“I don’t really understand what the big hype is,” Mayfield told Islanders Insight, while the swarm of reporters surrounded Mathew Barzal. “It’s something that they can write about and talk about. For players it’s not as big of a deal I don’t think. It’s like playing any other team, they have some good guys.

They have guys we have to watch, so it’s like any other game really for us.”

Thursday’s game means just as much for the players as it does for the fans, but for different reasons. The Islanders are even with the Washington Capitals at 79 points in the Metropolitan Divison, but have dropped three of their last four games.

Their bout with the Maple Leafs is also the Islanders second of three consecutive games with playoff-bound teams.

Trotz canceled Wednesday’s practice at the last minute to give the Islanders some time to mentally rest up for the game on Thursday and hone in their focus on what matters.

“Some time to just regroup, get your mind around (the game), physically get a little bit of rest,” Mayfield said about the day off. “Then mentally as well. Just stay away from the rink and stay away from hockey for a little bit. It’s hard to turn your brain off sometimes, so it was nice to get that.”

“We have to get two points. There’s no question. The focus should be on how we play, trying to get the two points, playing our game for 60 minutes and not deviating.” #Isles pic.twitter.com/2R9KEwjJpk

Now it’s full steam ahead with the game on Thursday and all the outside noise surrounding it. The Islanders are expecting a passionate group in the stands that will hopefully give them an extra jolt, like they have in previous games.

Trotz’s only message to them, though, was to just be respectful.

“You have to respect that John gave his all for a long time for the organization,” Trotz said. “He’s earned the right to go back home. Some people are upset or whatever, but just be respectful. Cheer us on and let’s have a good hockey game tonight.”