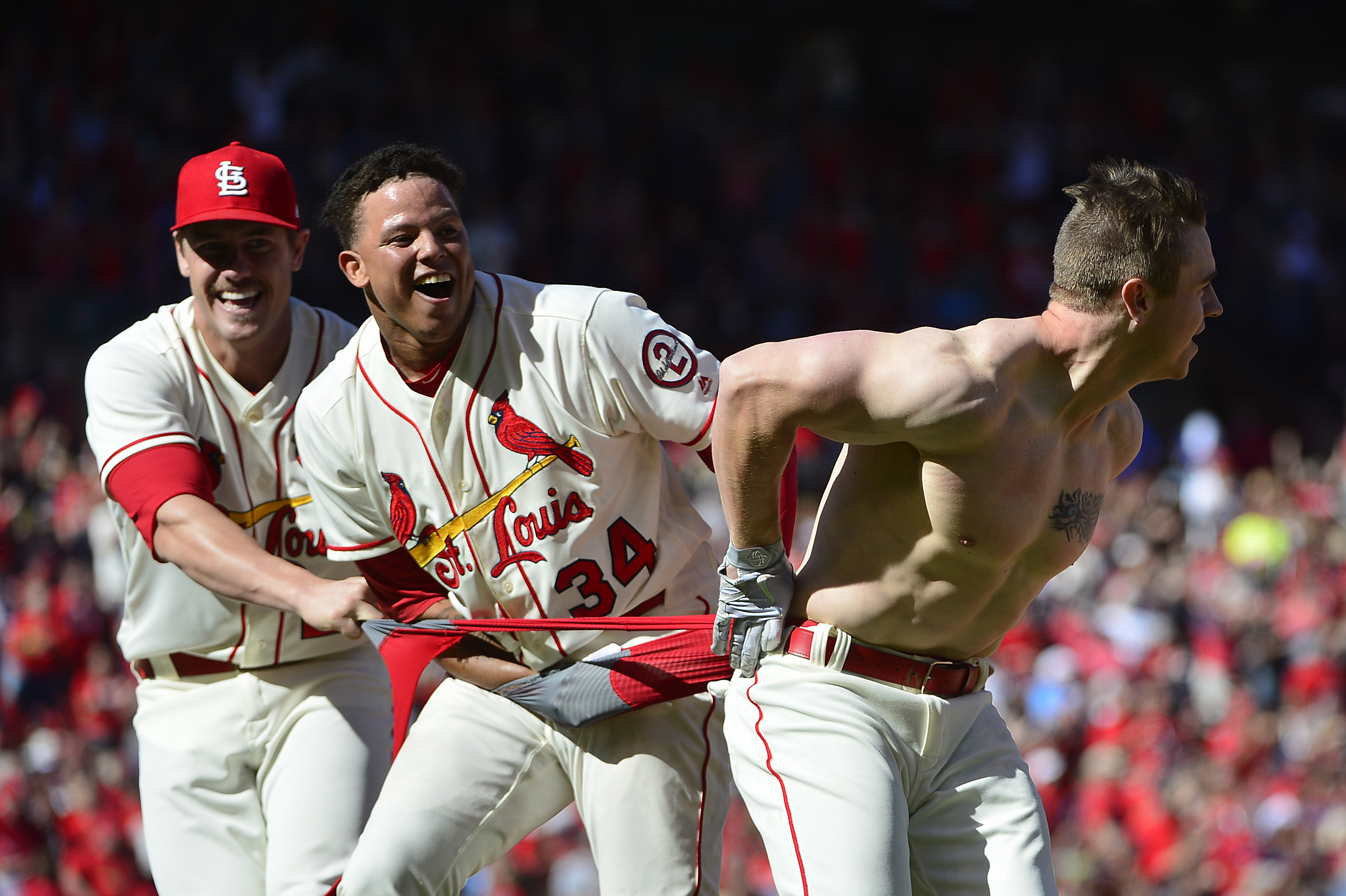 Let’s talk about the bench, mmkay?

This isn’t all that exciting of a topic, but the Cardinals bench heading into 2019 really intrigues me. I’m not sure where all the at-bats will come from, but I like the pool of players that will be taking them.

We’ll start with a couple of assumptions. The first is that Dexter Fowler secures the starting role in RF. That is the team’s preferred route. The next assumption is that the Cardinals will carry only 12 pitchers on their staff. The intention to do so was indicated by Mike Maddux in a recent article from Derrick Goold. We’ll see if that actually happens, but I’ll roll with it for now.

So, the effect of those assumptions is: 1) Jose Martinez and Tyler O’Neill are not starters and 2) there are a total of 5 bench spots available.

Now let’s look at the pool of players.

First, one of the 5 spots is dedicated to the backup catcher.

Eliminate the exciting prospect Knizner first, as he needs to continue his development by playing almost-daily in Memphis.

Hudson is a wild card, and there is some interesting info on him in a post by Brenden Schaeffer. His best role is likely serving as a veteran guide for Knizner.

If Wieters is healthy then this should not be a competition.

Pena was somewhat serviceable defensively last season, but he was really awful at the plate. For the year he had a 32 wRC+, which was good for 404th out of 405 players to take 140 plate appearances in 2018.

Regardless, he is far better than Pena at the dish. He is also a switch hitter, making him far more versatile from a match-up standpoint.

And while he isn’t a stud with the glove, his defensive metrics also grade out better than Pena.

I’ve used far too many words to tell you that Wieters is our backup catcher.

One bench spot accounted for.

3 of the remaining 4 spots will go to Jedd Gyorko, Jose Martinez and Tyler O’Neill. Gyorko and Martinez need no explanation and O’Neill has absolutely nothing to prove at AAA. He is also your primary back-up CF.

That leaves one open for competition between Yairo Munoz and Drew Robinson, primarily, with a slew of other outfielders and infielder hoping to catch eyes.

This really comes down to Robsinon vs. Munoz. The latter has the benefit of familiarity and performance in 2018. He can play at 6 different positions (with varying degrees of ability) and showed some pop and poise at the plate, with 24 XBH and a 102 wRC+ in 329 PA’s last season.

The only real issue with Munoz is that he is a RH and other than the ability to play SS and CF (in a pinch), he is positionally redundant with Gyorko.

That’s where Robinson comes in.

He can play all of the same positions as Munoz, and likely play them as well or better. Also, where Munoz his 8 HR’s in 329 PA’s, Robinson has popped 9 in his 246 MLB tries. He possesses more raw power and has shown a higher walk rate at all levels.

And he does it from the left side of the plate. The issue is that, so far, in his MLB experience, he has struck out 40.2% of the time and hit just .204. If he brings that closer to 26-30%, while still very high, it makes him a legit power weapon off the bench. And he provides that along with defensive versatility, unlike the Matt Adams-type.

Robinson has to perform to beat-out Munoz, that’s the bottom line, but that power is very intriguing, especially for an already RH-heavy roster.

Potentially, the Cardinals could roll out a bench that features 3 players (O’Neill, Gyorko, Robinson) with easy 20+ HR potential across 500 ABs, and 2 more that would have the ability to hit 10-15 (Wieters and Martinez). Munoz would also fall into the latter category.

Now, they wouldn’t achieve those totals off the bench, but the potential is there for multiple bench players to reach double-digits, and for the last guy on your roster to still pop 5-7 HRs.

According to Baseball-Reference, last season Cardinals subs (players that didn’t start the game) had a .630. Pinch hitters had just a .580 OPS.

The lowest projected OPS (ZiPS) among the 6 bench candidates is a .642 mark for Wieters. Even that outperforms the Cardinals “subs” numbers last year. 3 of the 5 — O’Neill, Martinez, and Gyorko — are projected at .749 or higher. That trio alone makes this a strong bench, but having Robinson/Munoz & Wieters instead Garcia & Pena is major power upgrade over 2018.

Pick your poison, there should be plenty of pop coming off the pine this year.

Thanks to Fangraphs for stats.