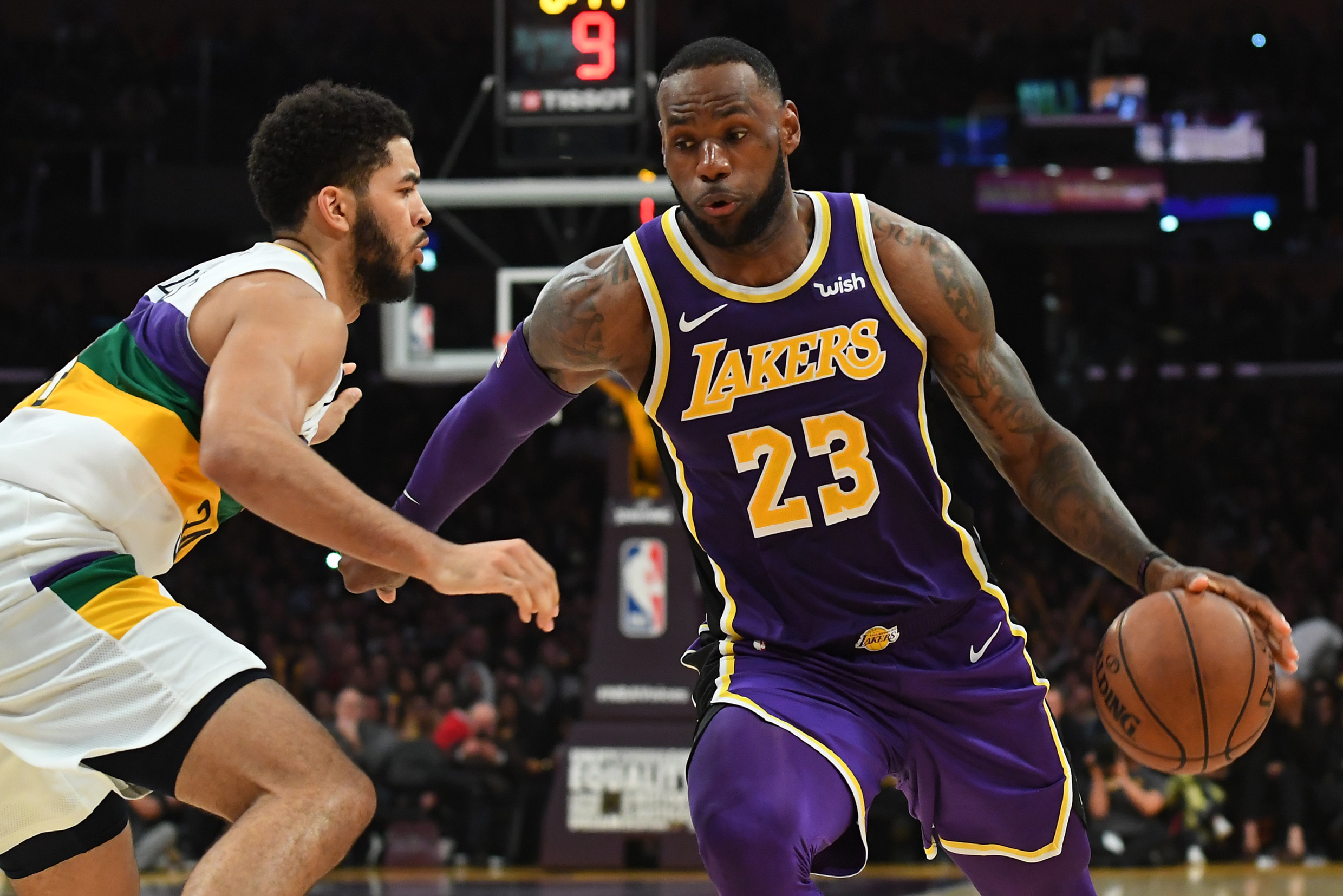 Only six weeks of regular-season play remain in the 2018-19 NBA season, and the playoff picture is beginning to take shape. Teams hoping to qualify for the postseason or possibly improve their seeding will need to give it everything they have in the coming weeks.

The NBA trade deadline shined light on which teams are buyers, and which are sellers. As such, we have a better idea of which squads are looking to win this season. Only two teams can punch their ticket to the NBA Finals, though, so let’s take a look at some pretenders and contenders in the mix for the Larry O’Brien Trophy this season.

If LeBron James didn’t suffer a groin injury against the Warriors on Christmas Day, we probably wouldn’t be questioning simply if the Lakers will make the playoffs, but instead how far they will get with the best player in the world leading them.

The fact of the matter is this team wasn’t prepared in the slightest for their star to miss 17 games with an injury, and it didn’t help that some of the younger players appeared to lose a bit of confidence when their names came up in trade rumors. On top of that, James hasn’t looked nearly as dominant as he was earlier this season before the injury. Even if the Lakers do make the playoffs, they simply don’t have enough talent on their roster to compete in the Western Conference.

The Celtics made it all the way to the Eastern Conference Finals one year ago without the services of Kyrie Irving and Gordon Hayward. One would think that by adding those two into the mix, the sky would be the limit for Boston this season, but that hasn’t been the case.

Poor defense and a lack of team chemistry have been common themes for the Celtics, and as they continue to drop in the conference standings, the road to the NBA Finals will get more and more arduous, so it’s hard to see them making a deep run this season.

The fact that Indiana is still a top-three seed in the East after losing Victor Oladipo to injury is pretty remarkable. We can chalk that up to good coaching and its role players for stepping up.

When Oladipo is on the court, the Pacers are legitimate contenders. Without him, though, they’re just average. It’s tough to win in the NBA without a team’s star player — as Lakers fans know all too well — and Indiana will realize that rather quickly.

The Nets are a great story, and their young stars are beginning to shine, but they lack a superstar, which is needed to compete in the Eastern Conference. Head coach Kenny Atkinson and his players deserve a ton of credit for what they’ve accomplished this season.

What was once a doomed franchise is finally starting to turn things around, and it appears the Nets have found a player that runs the offense which they can build around in D’Angelo Russell. But with Milwaukee, Toronto and Philadelphia to go through in the East, this just isn’t Brooklyn’s time to contend for a conference title — at least not yet, anyway.

The Clippers may be in position for a playoff berth at the current time, but it won’t be surprising when another team gets hot and claims it. Had Los Angeles not traded away Tobias Harris before the deadline, we’d likely be singing a different tune about the team.

The reality is that this team appears to already be looking ahead to the offseason, and what its next move will be, once the free-agent market opens, having cleared enough cap space to potentially sign two max players this summer. It’s hard to avoid looking ahead when the front office is dictating whether the team is a buyer or seller — just look at the Lakers and Pelicans.

The Nuggets missed out on the playoffs last year after coming up short in a winner-take-all game against the Timberwolves in their season finale. This year, though, Denver won’t have any trouble making the postseason. In fact, there’s a real possibility the Nuggets could end up with the No. 1 seed.

Denver has been one of the most well-rounded teams in the NBA this season, but for many of the Nuggets players, this will be their first taste of the playoffs. It will be interesting to see if that affects them at all. Either way, this team has the potential to go deep — as they can shoot, rebound and also have a distinct home-court advantage.

It’s important not to sleep on Portland. The Trail Blazers may have been swept in the first round of the playoffs during three of the past four seasons, but they’re a threat to go far this time around.

Damian Lillard and CJ McCollum have been shooting lights out, and the addition of Enes Kanter to the bench might be the move that puts Portland over the top, giving them a legitimate scoring threat inside. The duo of Kanter and Jusuf Nurkic is already making life difficult for opposing teams on the glass.

The final playoff spot in the Eastern Conference will likely go to a team in the Southeast Division, but we just don’t know which one. Orlando, Charlotte and Miami are all close in the standings, but it feels like momentum is on the Heat’s side.

Goran Dragic has returned from injury, and is emerging as the team’s sixth man. Dwyane Wade has been playing more minutes, and he even hit an insane buzzer-beating three-pointer to beat the Warriors. Not only that, the team nearly followed that up with a win in Houston the next night, but ran out of gas in the fourth quarter. We’ll see if Wade has enough left in the tank for one more playoff push, but signs are pointing toward him being able to do exactly that.

Utah got off to a slow start this season, but the Jazz are finally hitting their stride when it counts. Thursday night’s win against the Nuggets was the team’s 14th in 19 games, and it did not come easy. Not only were the Jazz on the road in the second game of a back-to-back, but they were also without starting point guard Ricky Rubio. Joe Ingles played the role of playmaker in Rubio’s absence, dishing out 10 assists, to go along with 15 points. Utah also got a big outing from Kyle Korver, who scored 22 points off the bench.

The Jazz might not be as loaded with talent as other teams in the Western Conference, but they could prove to be a tough out come playoff time.

This season was apparently supposed to be one final rebuilding year for the Kings, but apparently the team’s players didn’t get the memo, as they’re closing in on the final playoff spot in the Western Conference.

If there’s one team the Warriors may want to avoid seeing in the first round of the playoffs, it’s the Kings. Sacramento played Golden State tough this season, with all four games going down to the wire. The Kings have a lot of speed and young talent, so if they qualify for the postseason, they could make things interesting in the first round, especially if matched up against the Warriors.