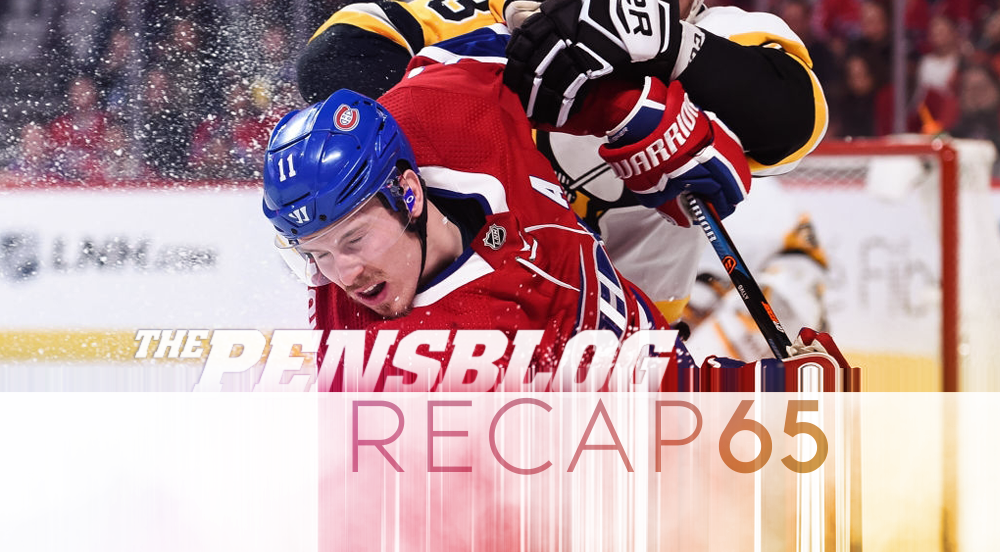 Statement game from the Penguins.

That’s the only way to describe this win.

Backs against the wall, on the outside of the playoff picture looking in, final game of a road trip playing in one of the toughest barns in the league against a team directly above them in the standings and what did the Penguins do?

The hung dong on the Habs and put 3 by one of the best goaltenders on the planet in the first 9 minutes.

And when it mattered most, the Money Boys stepped up and shined.  Crosby set the tone early, Money Bag Jake Guentzel followed suit with a 4 point night of his own, and Money Murray was near perfect.

All that culminated in the Pens moving back into Wild Card 1 on 77 points, just 4 points back of the Islanders and Caps, who both sit on 81 points at the top of the Metro.  Both are in action today against the Rangers and Flyers respectively, while the Jackets, 2 points back of the Penguins with a game in hand, hand off that game as they play host to the Jets today.

Nothing about the Eastern Conference makes a damn bit of sense.

HCMS made exactly 1 change to his lineup that fell 4-3 in OT in Buffalo the night prior, straight down to starting Murr on back-to-back nights. People were displeased by this.  But that only true change was putting McCann up with Crosby and Hornqvist down with Bjugstad and Simon.  Carey Price also got the start for the second time in as many games, but apparently that’s chill.

Crosby won the opening draw, but that didn’t mean they got to keep possession because Johnson was unable to complete a 25′ pass to McCann on the left wing.

The puck ended up in deep, but Crosby’s and Guentzel’s hounding pursuit left Montreal dazed and confused, sending their outlet pass straight to the stick of Justin Schultz to send an area pass over in McCann’s direction.

Watch the play McCann makes at the blue line here.  He has no angle or position to play the puck with his stick, so instead he makes a beast move to get his ass into the Canadien backchecking, shield him from having a chance at the puck, and kicks it up to 87 hitting the line.

Crosby can’t control it cleanly, but stays on top of Jordie Benn, who turns it over to McCann.

McCann to Crosby to Jake to Crosby.  Bang.

The sell job Money Bag threw out here on opening up the blade to bait Price into thinking the shot is coming as Crosby feeds him in the slot before hitting 87 back down low with the pass should be in every Outside Sales training video.  Give Jake like $12M who cares.

Murr would make a couple of nice saves in between, but just about 3 minutes later, the Pens would head to the powerplay fir the first time on the night after Petry got rung up for holding Simon.

And just like that, the Pens PP put the Habs to the sword, building off their 2 PPG effort the night before.

Big time zone entry from Phil! led us to this point, but it was Kessel’s work as he moved down the wall into the corner that made this goal happen.  He pulls out two Habs penalty killers before somehow reversing the puck in the open ice back up the wall to Crosby.

Sid had the easy part here of just finding Malkin to bomb one through a stick and through Price.

Four minutes later, the lead was 3.

Coming ff an icing call, HCMS got his new-look first line out fo the offensive zone faceoff.  They set up the James Neal Play for Money Bag to net his 30th of the year.

And wow, would you look at that?  Even the best goalies on earth give up squeakers every now and then.  Maybe trying to poison Murr every time he gives up a goal is actually as dumb as it is stupid!

Following the goal, Johnson went off for a roughing penalty after bashing someone in the head in front of Murr, then had to kill off another one about a minute after that initial kill after Phil! went off for slashing.

Big difference in the period was goaltending.  Carey Price struggled to settle in.  Matt Murray was, objectively, fire.

No word if Murray smiled after this save on Domi. Oh my. pic.twitter.com/xzTr49pW1K

Pens got to go to the PP early in the period after Gallagher went full greaseball, but Price was dialed in in making 3 big time saves.

Despite not scoring on the powerplay, they did about a minute after Gallagher was released from his cage because some idiot tweeted that Price wasn’t giving up another goal after that series of saves above.

Crosby and Co. had something cooking down low, but it was Montreal getting out of that pickle, only for Pettersson’s great gap and long reach to break up the clean zone exit.

Guentzel starts hounding and the Habs get stretched here when Domi stops up between the red and blue lines.  All he can do is just throw a hopeful something across the ice to where McCann is lurking.

McCann, again, does a stellar job here at winning the little battle, allowing Gudbranson to just chip the loose puck up the wall.

Money Bag was just mesmerizing here.  He helps break up one thing on one side of the ice, reads the game and cheats over to the other side to take Gudbranson’s chip, hit the offensive blue line with speed, and drop it off to 87.

Guentzel’s speed and drive in behind the D caused disarray that when Kulak stepped up on Sid, it was lights out for the Habs.

Guentzel creates his own space here and the shifty little pass from 87 was something special.  But Money Bag’s ability to take the pass on the backhand and, in one motion, snipe one glove side on Price was some next level shit.  That’s a goal scorer’s goal, fam.

But under a minute later, the Habs would pull one back after Malkin, cutting to the middle after getting into the offensive zone, had the puck knocked off his stick to send the Habs in on a 2v2.

Gallagher had his initial shot turned aside by Murray with his perfect rebound control sending it over to the far wall.  But as ZAR and Schultz tracked down the rebound along the boards, Danault took control of it ahead of Jultz, shrugged off ZAR like he was a small child, and tried to force it in front.  He failed once, but still had positioning to circle the wagons, fuck up a wraparound attempt, and get lucky enough for the puck to end up on Gallagher’s stick in the slot.  Tough break for Murr here.

Both teams would follow it up trading off powerplays on either side of some 41 seconds of 4v4 time.  Shaw got it started with an interference penalty.  Pettersson negated the Pens PP with a holding penalty.

Price had to stop Guentzel on a breakaway on the 4v4 and had to stop ZAR on another one at 5v5 after the Pens killed off the Pettersson penalty.  Price may have had a rough first period, but he and Murr were the reasons this game wasn’t like 8-4 through 40.

The latter of those two goalies starred in their own pilot all through the 3rd frame.  The Matt Murray Show may get picked up for 8 more seasons after next year.

that's a wicked deflection that murray did an unreal job to hold onto. oh my. pic.twitter.com/xOJn6aJrhK

Murr’s clinic meant that Claude Julien got Price out of the net way earlier than normal for the extra skater with 4:30 to play and Jared McCann found himself on the business end of some nice zone clean up from Pettersson, Gudbranson, Crosby, and Guentzel, nailing himself his 3rd goal in his last two games to seal the deal.

Enormous week ahead as the Peng head back home to host the Panthers on Tuesday before a home-and-home with the Jackets (Thursday at PPG, Saturday at Nationwide).  Bruins, Caps, and Sabres lurking the following week.  Do it.  Go Pens.