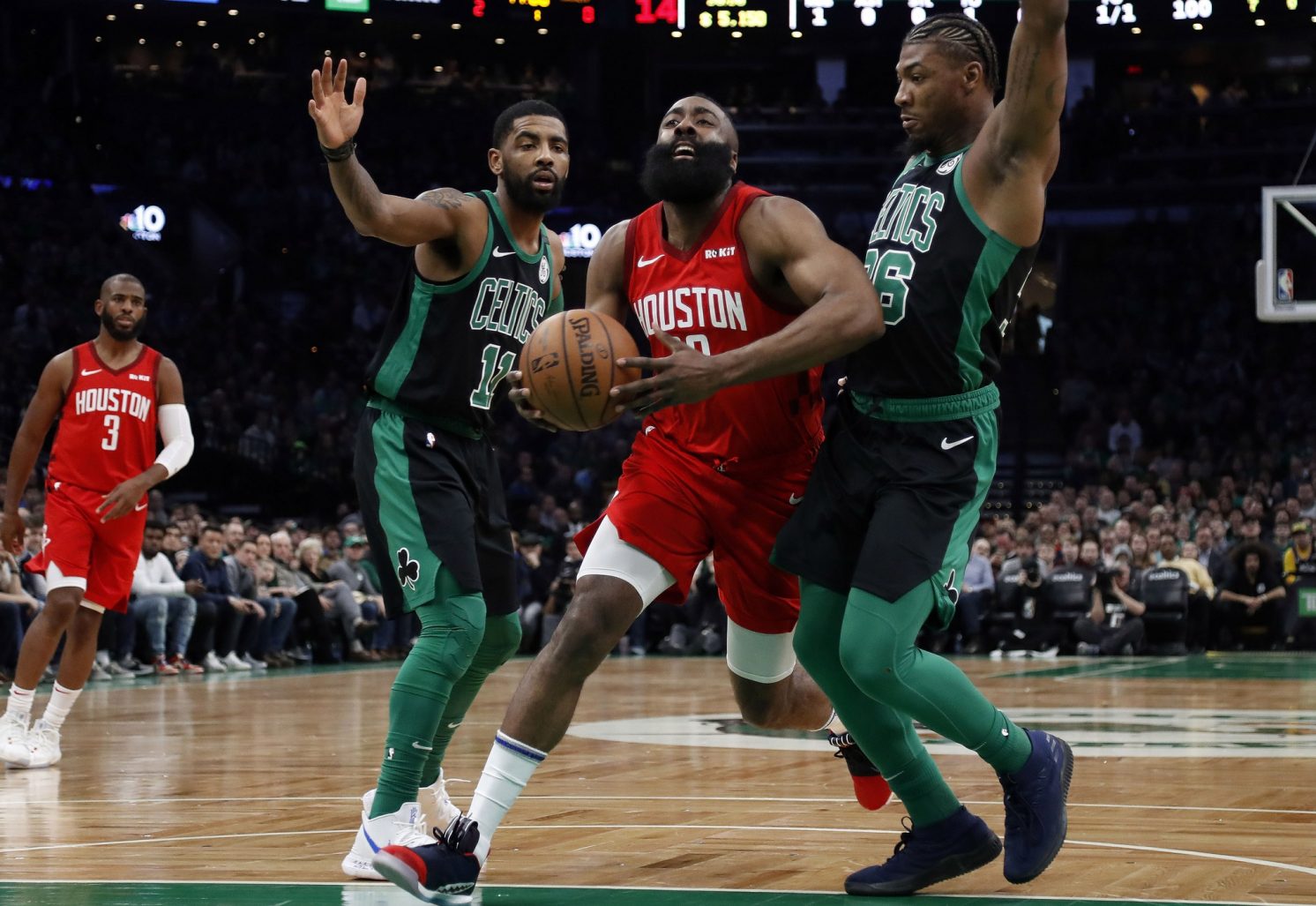 IN A NUTSHELL
“I am become death, the destroyer of worlds.” — J. Robert Oppenheimer, Manhattan Project, July 16, 1945

Yes, that’s right. I’m going to equate the misery of (most of) this game with the creation of the world’s most horrific weapon.

Because the Houston Rockets pretty much hit the Boston Celtics with force equivalent to an intercontinental ballistic missile carrying a multiple-warhead payload. Dazed-looking, drifting defense, atrociously poor-schemed and inaccurate offense, deadeye three-point shooting from the opposition and the one-man shellacking crew that is James Harden combined to hand a 115-104 loss to the Cs. It would’ve been far worse if not for consistent effort throughout by Al Horford and Kyrie Irving, and a spirited near-comeback in the final stretch of the contest.

WHAT WENT RIGHT
Horford and Brown showed more energy than most of the Celtics roster in the first half. Uncle Al shot almost flawlessly during those frames, while Brown led the hustle charge for the reserves.

Not unlike Friday’s slump-busting victory over the Wizards, the Celtics finally resembled the team we expected before the season started during the fourth quarter, with an intense comeback effort driven principally by Brown and Jayson Tatum. The team just kept driving headlong into Rockets defenders and successfully drew charges to capitalize at the charity stripe.

WHAT WENT WRONG
Before that, though, Tatum was little more than a slapped ass on the court, ineffective on offense and listless on D. He wasn’t alone by any means.

Consider this: You’d think that putting better defensive pressure on an excellent two-way center like Clint Capela would be in the Celtics’ game plan, but it certainly was not. Double teams on Harden let to a wide-open Capela for gimme lobs on multiple occasions, and more often than not such attempts did precisely shit to stop the Beard.

Those are just two failures in an absolute filth-abattoir of a first half, but they’re emblematic of most of the game. Boston had no mojo on defense aside from aberrant stretches of competence, and couldn’t hit crabs in a bucket in terms of three-point shooting. I reached for the Jameson and pickle juice at halftime. There are few better delivery systems for an alcohol jolt, and it was necessary.

WHAT THE HELL
One might expect any foul-related complaints in a story about a game involving the Rockets would center around Harden, but the reigning league MVP only went to the line twice in the first half (and just four for the game).

The issue stemmed from the duality of certain things: Jaylen got called for a travel on a fastbreak layup, but Capela didn’t receive similar calls; Harden’s one egregious getaway was a three-point attempt in which Terry Rozier barely went near him; the Rockets’ physicality wasn’t noticed by the refs at all until the final quarter (when they went into makeup-call mode and gave the Celtics multiple trips to the line).

GREEN FIRE HIGHLIGHTS
I don’t think there’s much worth highlighting, but here’s a great Jaylen dunk: