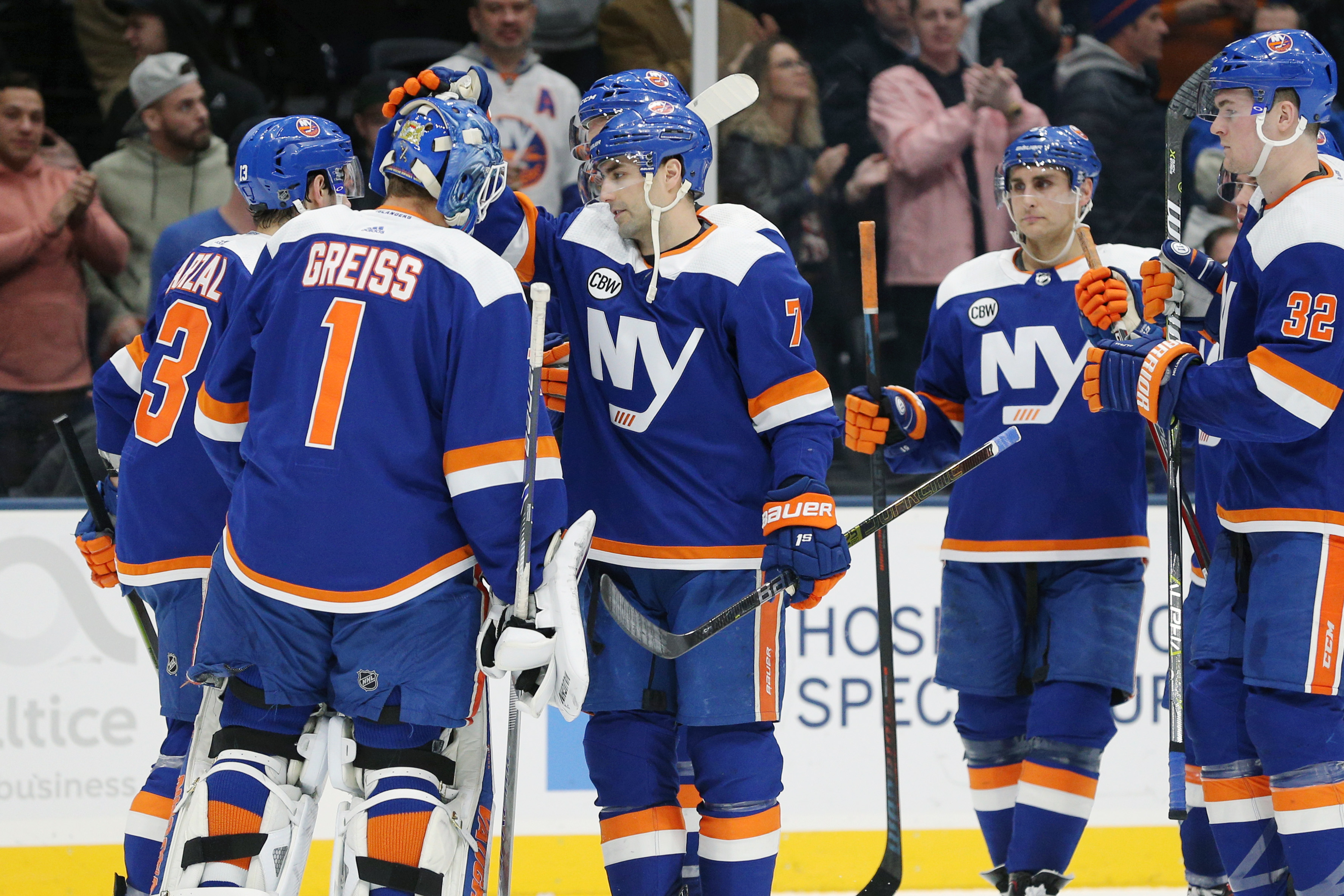 UNIONDALE, N.Y. — It was anything but pretty on Tuesday night at the Nassau Coliseum. However, as ugly as it was the Islanders managed to come away with a 5-4 shootout win over the Ottawa Senators, their first win since defeating Toronto last Thursday and their fifth win over their last 10 games.

The victory helped the Islanders pull even with the Washington Capitals at 81 points and move back into first place in the Metropolitan Division.

The two points almost didn’t come to fruition after the Islanders blew a 4-2 lead in the third period, which saw the Senators tie the game on a controversial goal call in the final five minutes. Brady Tkachuk bowled over Islanders starter Robin Lehner in the goal crease allowing Jean-Gabriel Pageau an easy opportunity to put the puck in the net.

The play on the ice had first been ruled a goal, but the officials changed the call after conferring with one another. The Senators challenged the no-goal call and the play was ruled a good goal after review.

“I mean the way we were playing we kind of deserved it,” Islanders captain Anders Lee said about the play. The Islanders had allowed the Sens to push back in the final 20 minutes and were outshot 8-6 in the third.

“Can’t have third periods like that, especially with a two-goal lead,” Lee continued. “The way things have been going we found a way to get two points. It was ugly, it was a shootout, but it’s fine.”

The play stung even more with Lehner leaving the game with an injury. Islanders coach Barry Trotz did not have an update on Lehner after the game.

“Obviously he had that collision. … We’ll see where he is in the morning,” Trotz said.

On the tying goal, the league ruled that Nelson had pushed Tkachuk into Lehner, something that Nelson did not agree with. “I don’t think I pushed him into Robin, I think he made contact there,” Nelson said after the game.

The win came at a crucial time for the Islanders, who had dropped two straight games and saw their hold on the division lead disappear. The Metropolitan Division has become a tight race with just six points separating the Islanders and the Columbus Blue Jackets, who occupy the final wild-card spot.

Columbus and Pittsburgh, which sits four points behind the Isles, were both victorious on Tuesday.

“Obviously two points that we need badly,” Nelson said. “Some good things, some bad things. Obviously giving up the lead, that hurts, but getting two points in the shootout is big for us. Now we have to reset, get back and go play (the Senators) again on Thursday.”

Tuesday’s win was also Trotz’s 800th as an NHL coach. Trotz had been sitting at 799 wins since last Thursday’s game against the Maple Leafs.

The Islanders coach jokingly said that the record was the last thing on his mind.

New York jumped to an early lead 8:22 in the first period after Brock Nelson cleaned up a Josh Bailey rebound. The goal came after the Senators turned over the puck in their own end.

Brian Gibbons tied the game at one 26 seconds into the second period, but Devon Toews put the Islanders back in front 2-1 at 2:34 of the second. Anders Lee scored his 23rd goal of the season to put the Isles up 3-1 at 5:45 of the middle frame.

Oscar Lindberg cut the Islander lead to 3-2 with a goal at 6:32, however, Ross Johnston answered right back at the 10:02 mark with his first goal of the season.

Jordan Eberle and Mathew Barzal scored in the shootout to lead the Islanders to the win.