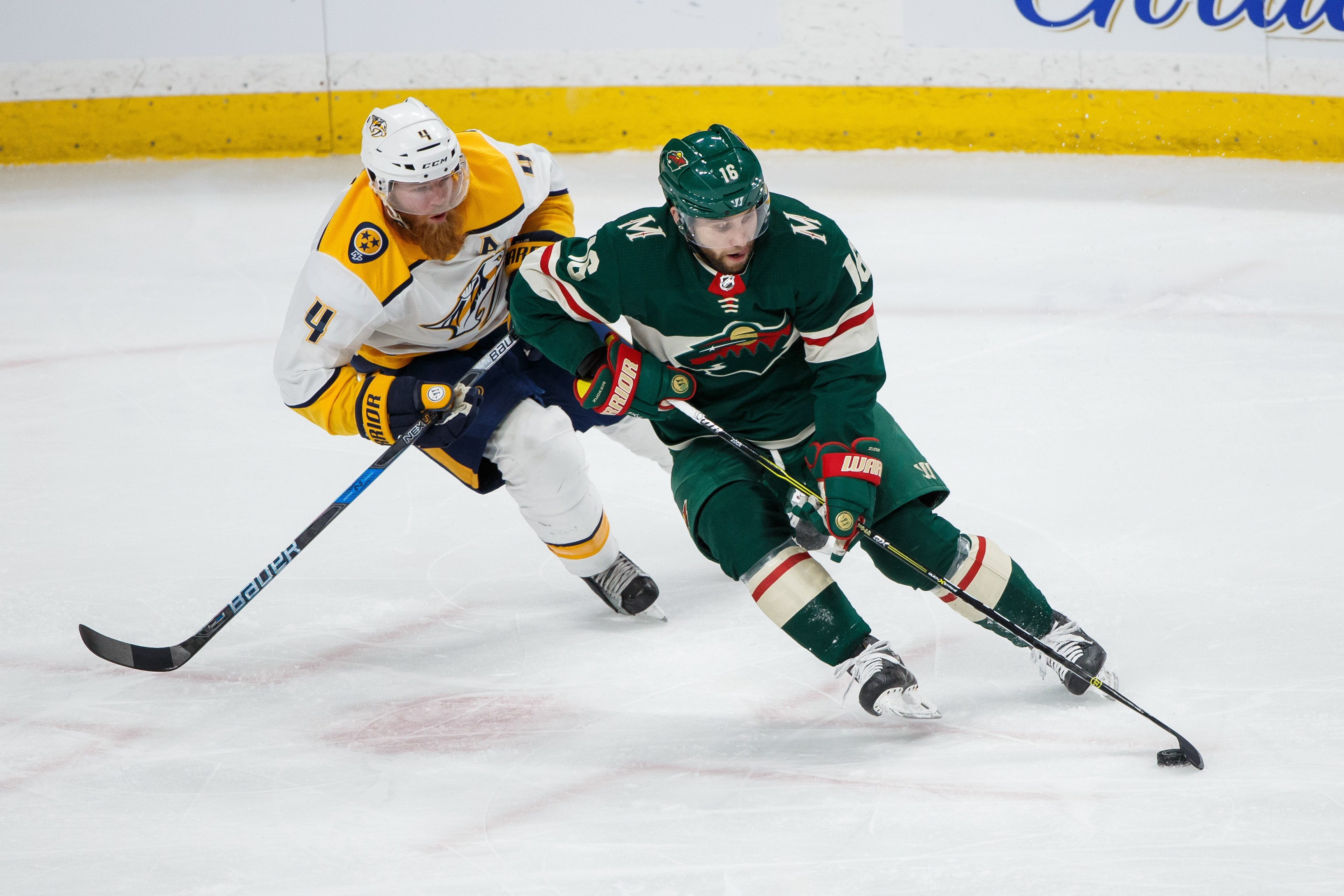 It was a gritty effort, playing its 2nd game in less than 24 hours the Minnesota Wild dug deep and made a good effort of it on Sunday in a 3-2 shootout loss to Nashville.  I think most Wild fans were impressed by the effort and determination of this club.  Now they will have had a bit more time to rest for their rematch tonight in Music City.

The Predators barely eeked out a win and seem to be feeling the pressure of being a team with high expectations.  Will they play a little more relaxed and feeling confident from their victory or will the Wild be able to use some of their road magic in order to conjure up another clutch two points?

1st Period Thoughts:  Minnesota was moving its feet well to start the game and they’d force a turnover in the neutral zone and Jason Zucker would skate in and blast a shot that was fought off by Pekka Rinne.  The Predators would counter attack as some careless play with the puck allowed Nashville to apply some good pressure as Matt Donovan hammered a shot from the point that was stopped by Devan Dubnyk and the rebound went out into the slot where Craig Smith fired it by the Widl goalie.  1-0 Predators.  Minnesota wasn’t moving its feet so well and the Predators’ puck pressure was compelling the Wild to send the puck out of the zone on area passes that made for easy turnovers.  Minnesota should’ve gotten a little bit of relief as P.K. Subban sent a puck out of play, but to no call much to the outrage of the Wild bench.  The Wild would get their cycle game working a bit as Anthony Bitetto fed a puck from beneath the goal line out front to J.T. Brown whose shot was denied by the leg pad of Rinne.  A few minutes late Rinne stonewalled Ryan Donato twice from point blank range.  Minnesota kept attacking and Kevin Fiala got a little space and he’d beat Rinne with a shot, short side that tied it up at 1-1.  The Predators tried to answer back as a point shot by Mattias Ekholm that drew a rebound from Dubnyk who then dove to deny Filip Forsberg.  Minnesota answered back with some pressure of their own as Eric Staal let go of a shot that hit Rinne and then off of the left post.  Minnesota would draw a penalty shortly thereafter, but on the power play the Wild struggled to get set up on the man advantage as Nashville’s puck pressure burned away a minute and a half of time before the period ended.  Not a bad response after Nashville’s goal but they’ll need to be more determined in the high traffic areas of the ice.

2nd Period Thoughts:  The Wild did nothing with the remainder of its power play as the puck pressure by the Predators continued to cause Minnesota issues in getting established in the offensive zone.  The Predators was forcing turnovers and Brian Boyle sent a shot from the slot that was punched aside by Dubnyk.  Minnesota answered back with some pressure of its own as Zach Parise won a race for a loose puck and then he’d send a shot on goal from his knees Rinne knocked down and covered up for a whistle.  The Predators would pin the Wild in its own end, using its speed and strength against the Wild’s top line of smaller players.  The home crowd would cheer at their zone domination, but Minnesota would work the puck out of the zone and they’d create a quality scoring chance from in close for Luke Kunin that Rinne swatted aside.  The Predators would draw a penalty late in the period which would prove costly for the Wild.  Minnesota’s penalty killers gave a fair amount of space to Subban at the point, but the Wild looked to be on their way to disrupt their attempts to make the cross-ice pass.  Yet it was Subban who with little options to dish the puck just sort of flung a wrist shot on goal that beat a well-screened Dubnyk.  2-1 Predators.  With the Wild looking kind of dead and uninspired they’d tie the game back up late in the period as Pontus Aberg ripped a shot from the high slot that beat Rinne stick side.  2-2 game.  The Wild would draw a penalty for another late period power play.  Minnesota would get set up in the offensive zone but slow puck movement meant when the Wild did finally pull the trigger it didn’t reach the net as it was easily blocked and the game would stay knotted at 2-2 going into the 2nd intermission.

3rd Period Thoughts:  Scary moment early in the period as Craig Smith lost an edge and rolled up on the back of Zucker’s leg that bent in an unnatural way as he fell to the ice.  Zucker stayed down, clearly in pain and the Wild training staff would make their way out to attend to him, helping him back to the locker room.  Minnesota would go back out on the attack and it was Marcus Foligno feeding a pass into the slot from beneath the goal line to Eric Fehr who drove shot by Rinne to give the Wild a 3-2 lead.  The good feelings would be short lived as Roman Josi would step around a lazy defensive effort by Pontus Aberg and beat Dubnyk with a nice shot.  3-3 game.  The Predators would nearly tally the go-ahead goal as Wayne Simmonds rang a shot off the post.  Nashville seemed to have more momentum and were playing a fearless brand of hockey as they were taking any chance to shoot the puck and Viktor Arvidsson would skate in off the rush and blast a slap shot that snuck underneath the arm of Dubnyk.  Soft goal, 4-3 Predators lead.  Minnesota would try to go back on the attack with its 4th line which seemed to be one of the few lines that had chemistry and the strength to hold the puck in the offensive zone.  A late power play would give the Wild a little hope, but some bad passes and some lethargic play would thwart any chance Minnesota may have had.  The Wild seemed to lack the energy necessary to really push back.  Minnesota tried to work in close but were unable to pounce on the loose puck after Rinne’s initial save on Zucker’s wrap around attempt.  Minnesota would pull their goaltender with a little over 2 minutes left and right off the draw, Staal would work it back to Fiala who sniped it underneath the crossbar from the slot.  4-4 game to stunned silence from the home crowd.  The Wild were pumped after the Fiala goal and they continued to apply pressure as the Predators seemed content to defend.  Joel Eriksson Ek was denied on a wrap around from in close.  That was as close as it would get and this game would go to overtime.

Overtime Thoughts:  The Predators were tremendously patient in overtime, not willing to give up possession and waiting for the right moment to go on the attack.  The Wild were using plenty of speed in overtime, waiting for that mistake they could pounce on.  Ryan Donato would draw a hooking penalty on Mikael Granlund as he tried to drag a puck into the slot for a shot.  The call drew boo’s from the home crowd.  On the 4-on-3 power play the Wild were mostly static and not forcing the Predators penalty killers to move very much before Fiala would take a shot that was gloved by Rinne.  The Wild would switch up personnel which included Brad Hunt who wound up and blasted a slap shot that Rinne just touched enough of to send it off the post and out and the game would go to a shootout.

Shootout Summary:  The Predators would shoot first and Kyle Turris would take a wide right approach and as he moved across the middle he’d try to wrist one by Dubnyk who blocked it away.  Minnesota’s first shooter was Kevin Fiala who moved in rather slowly before snapping a shot off the right post and out.  The Predators’ next shooter was Ryan Ellis who started from the left and he’d tried to go 5-hole that Dubnyk shut down.  The Wild’s next shooter was Pontus Aberg who moved in and tried to go high and missed wide.  Nashville’s next shooter was Filip Forsberg who tried to deke and go 5-hole and again Dubnyk made the save.  Minnesota’s next shooter was Zach Parise who moved in slow and looked like he wanted to make a deke but he’d lose handle of the puck and never got a shot.  The Predators’ next shooter was Ryan Johansen who went ridiculously slow waiting for Dubnyk to move and as soon as he tried to poke check he’d beat him to the forehand side.  Dubnyk would protest to no avail saying that Johansen had stopped moving forward.  This put the game in the hands of Ryan Donato who raced up the ice but his 5-hole bid was dismissed by Rinne and the Predators prevailed 5-4.

~ Crease and Assist: A legally compliant Minnesota Hockey blog would like to recognize the passing of NHL Hall of Famer and former Detroit Red Wings star Ted Lindsay.  Lindsay was not only a tremendous player in his era, his greatest contribution was to help found the NHLPA.  His spirit and strength will be sorely missed.

LW – Kirill Kaprizov (CSKA Moscow, KHL) ~ the immensely talented winger continues to tease Wild fans with his tremendous skill as he scored a goal from between his legs and had a helper in CSKA Moscow’s 3-1 win which completed a 4-0 sweep of Vityaz Moscow.  Kaprizov has a goal, 5 points, in 4 playoff games.