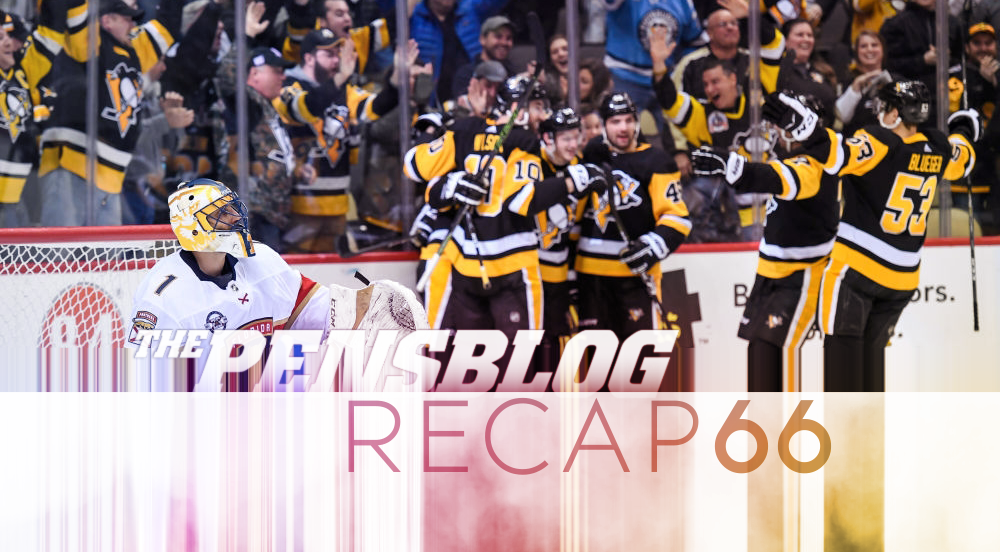 Coming off the heels of dismantling Montreal in their barn and a home-at-home with Columbus (more on that later) looming on the horizon, this had all the makings of a classic trap game. A team well out of the playoffs, selling off assets so they can make a big push on July 1 coupled with two gigantic games just days away, it would be understandable for the Pens to overlook this one.

Before the game got rolling we had to pause to honor Matt Cullen, becoming the second American-born NHLer to play 1,500 games. Say what you will about the old stallion, but all these years later, he’s still kicking. Takes a lot to play one game in the National Hockey League, let alone 1,500.

Pens all wore #7 Cullen jerseys in warmups, there was a ceremony and the team gave Cullen’s sons a truly irresponsible gift.

The players knew they could rely on two Pittsburgh companies, @PPG and Steele Auto Body, to make Cully’s new Polaris the perfect colors. Check out the before and after pics ⬇️ pic.twitter.com/AybJncMr4a

“His kids are gonna fuck shit up in that thing.” – Twitterless Rez (RIP)

Dumo was back in the lineup, Riikola was out and Murr was in the cage.

A mere 37 seconds into the contest, Geno would put the Penguins ….actually, I’m not using that phrase twice in two recaps, would take an early penalty to really make this seem like a trap game. Tripping up Ekblad, he’d sit.

The Pens would escape the first minute of the PK largely unscathed until they were hit with a bit of bad luck. Hoffman would take a break from harassing teammates online to make a slick cross-ice feed to Borgstrom. Borgstrom was looking to feed this in front to Trocheck (HE’S FROM HERE!!) but he was tied up by Gudbranson. It would deflect off Gudbranson’s stick and past Murr to give the Cats the lead.

I, too wanted to and likely did flame Gudbranson for this, but all things considered, he makes the correct play, it’s just dogshit luck. Trocheck (who is from here) tries to make his way to the back door, Gudbranson rightfully ties him up, giving Murr the shooter. If Borgstrom doesn’t launch this puck at the complete right angle, it goes wide and the Panthers have to reset or it leaves the zone. Tough play.

A few minutes later, Luongo would have to make a pretty fluky save on Trotman…well, actually, the ref. This time, unlike when he was in St. Louis, he made the save.

A lot is going to be made of some of the passes and goals 87 has scored down the stretch, but this next play is a pure distillation of how much Sid is feeling it right now. You just don’t do things like this when you aren’t feeling yourself. Take it away, Kid.

Just gonna flip this over the goalie’s back, not a big deal.

Hornqvist with about 10 minutes remaining in the frame appeared to score, but there was no way. The hand-eye was impressive, but well above the crossbar. No goal, we remained at 1-0.

The Penguins would own the rest of the period. However, it was 90s Night at the Paint Bucket so a lot of 2-on-1 opportunities were passed by due to….passing. Great ode to the past.

We’d finish the period with a 1-0 Cats lead. The Pens had 56% of the shot share at evens and seven HDCF compared to the Cats…..zero.

It took only 16 seconds for Sid and his Actually Good Son Jake Guentzel to bring this bad boy back to even.

A dump-in attempt by JJ73 would bounce off the wall to Matheson and Crosby brought relentless pressure, causing Matheson to turn the puck over to 87. Sid found McCann in the slot and he was unable to handle the pass, but just like that second Friday of the month direct deposit, Money was there. Jake skated left, shot right and Luongo had no chance.

32 tallies on the year (so far) for Jake. Probably a good idea locking him up early as they did.

The secondary assist for Sid would be his 1,200th point in the NHL. Man. Feels like five minutes ago he was playing on Recchi’s line at Mellon Arena.

Were you worried that the Penguins would fall back behind the Panthers after Jake’s tally? Don’t lie, it’s Lent and if you lie during Lent Max Payne comes for you in a heavy-handed noir style killing. Well, never fear, despite your doubts and worry, Matthew Murray was there (as usual).

Hoffman with an unrealistic backhand saucer pass to Vatrano sneaking in the back door, but the two-time Stanley Cup winning goaltender was having none of it. Tracking the puck like someone that’s been there before, Muzz shut the door. Seems good.

About five minutes later the Penguins would get their turn on the man advantage as McGinn would get rung up for burying Geno Malkin with no puck in sight.

Hope everyone has their ticket, because the Sid Show is about to begin.

Crosby receives a pass from Hornqvist in the neutral zone and as he enters the Panthers zone, he turns Weegar inside out while simultaneously (that means at the same time) finding a streaking Phil Kessel. Phil rips one low and hard on Luongo and kicks the rebound right to the slot. Because of how hard Luongo pushes side to side to stop Phil he is now completely out to lunch and Weegar, probably due to severe embarrassment, loses Sid. Sid swoops in and makes no mistake. Bang.

Just seconds later, Nick “Jugs” Bjugstad almost scored what I would consider the goal of the year.

A point shot from Gudbranson, tipped by Simon was stopped by Luongo, but the rebound came right back to Simon and he somehow works it to his left. It deflects off a few things and Jugs came damn close to burying one from midair.

Despite taking the lead and owning the puck, it would be the Panthers who would get the next goal.

A clean breakout from Florida would work the puck to Trocheck (a Pittsburgh native) and he’d set up a pass to Hoffman for a clean zone entry. After Trocheck (who played for the Pittsburgh Hornets as a kid) made the pass, you just knew they were going to work the give-and-go and they did. Muzz does all he can to cut down the angle and meet Trocheck, but he put a perfect shot on net and we were back to evens.

We’d finish the period there. A bit more even in the second with both teams controlling about 50% each of the shot share and splitting two HDCF each.

The third period was the Luongo vs. Murray Show. Both goaltenders were called upon several times and both answered the bell. Luongo with 13 saves and Muzz with 11.

Each team would have a power play opportunity, but nothing doing on either.

With about a minute to go, the Pens were perfectly content to take one point. Playing a non-divisional opponent with points at a premium, they took the bet their 3-on-3 lineup could outgun Florida’s. That’s where we went.

Let’s just get right to it, shall we?

Everything about this goal is incredible.

First – unreal awareness by Sid. He sees Guentzel breaking and rather than try to force a pass or carry the mail himself until Jake gets open, he bets that Guentzel has the speed to beat Matheson to open area so he flips it just enough that it becomes a 50/50 puck.

Jake Guentzel turns a guy with a three inch, 13 pound advantage on him into a turnstile to win the puck battle and break to the net. Even with Matheson bearing down on him, Jake-N-Bake still takes his time to fake left, move right and beat Luongo for the game winner and his 33rd of the year.