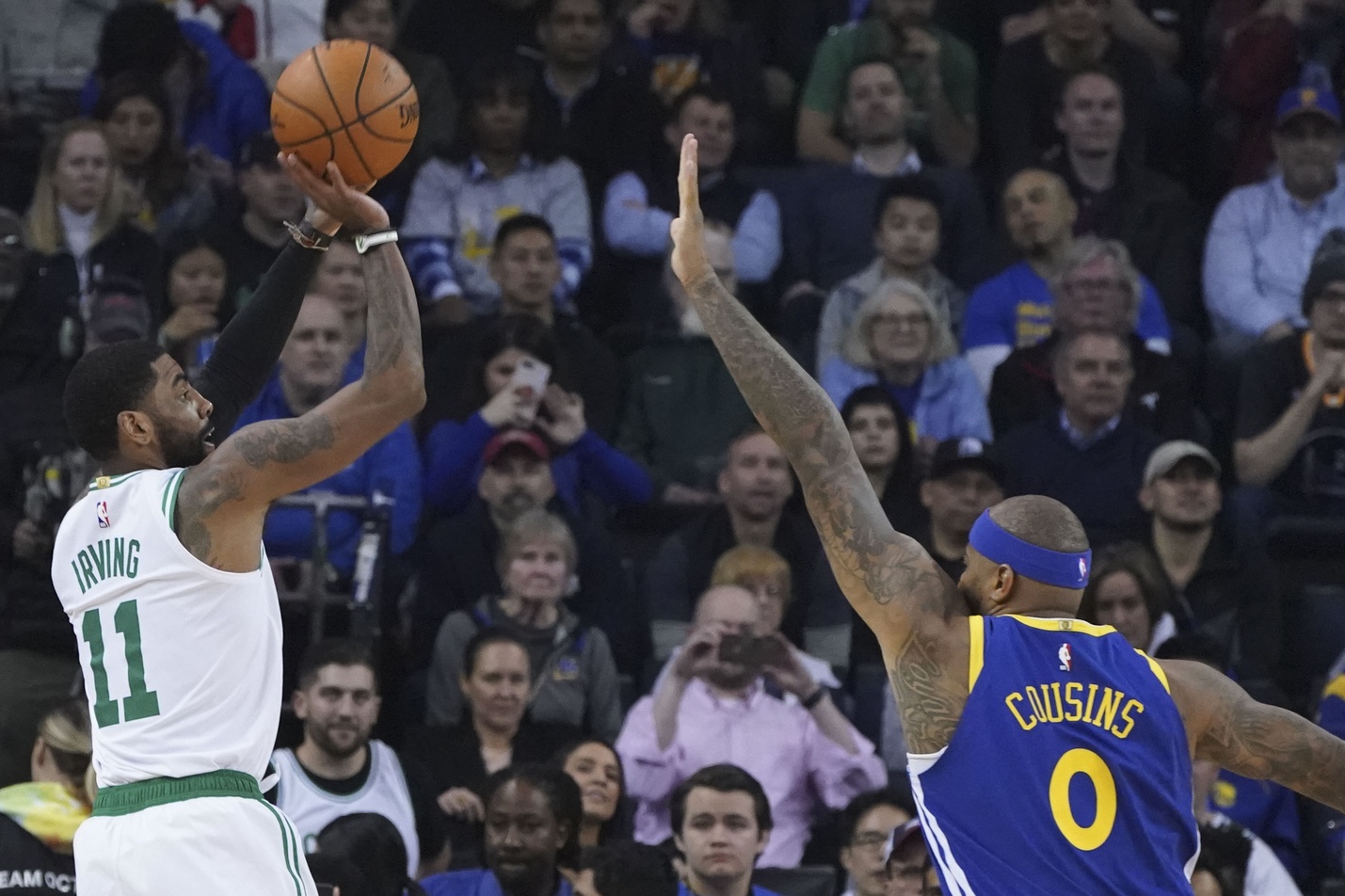 IN A NUTSHELL
Is this real life? Is my early-thirties ass so thoroughly washed that a late-night game assignment is causing me to enter a delusional state akin to John the revelator’s acid trip? Did…did the Boston Celtics just follow up one of their more demoralizing losses of the 2018-19 season with a brutal blowout of…the freaking Golden State Warriors? Isn’t everything utterly doomed to hell? There’s no way this c—

But it did happen. The more positive tone of Kyrie Irving’s media session at Monday’s practice (and Kevin Durant’s, on the opposite side) turned out to be clairvoyant, with Boston’s execution living up to its roster talent in a brutal, sideswipe-sudden dismantling of Golden State. Aside from a few moments in the first and third quarters, it wasn’t even particularly close, and the 128-95 victory for the Cs was, unlike the small-potatoes Wizards win last Friday, a real shot in the arm for an uneven squad. Gordon Hayward’s throwback performance will justly make the beat writers’ headlines, as well as Kyrie’s floor-generalship and the excellence of the Jays. But as is so often the case in the Celtics’ most impressive wins, it happened because the whole squad was clicking.

WHAT WENT RIGHT
The Cs’ quality of play during much of the first half would be enough to provide a reasonable argument, were one conspiracy-minded, that the squad’s regular season was a rope-a-dope act designed to fool opponents—not unlike the one the New England Patriots just pulled to win another Superb Owl several weeks ago. (This obviously isn’t the case, unless: a. the Celtics as a whole are perfectly feigning the discontent that seems very real or b. it’s some bazonkers secret plan only Kyrie, Brad Stevens, Horford and maybe Smart know about, like a high-level undercover police operation. I believe neither of those things.)

But seriously: Boston played some of their most inspired basketball of this season in this game’s first 24 minutes. They moved the ball out on the arc a lot, but also ran many more actions designed to end in drives to the lane than they have for much of this recent bad streak. They had 17 assists in the first quarter and a half as their lead started in the modest single digits and then jolted up to 25. If not for Curry scoring 19 in the half—as many as Hayward, which, um, is not a sentence I expected to type any time soon—the Dubs would’ve been down by a whole lot more.

WHAT WENT WRONG
Golden State snapped out of their laziness coma from the start of the third frame, as is often their wont, and it showed on the defensive end as Boston found scoring a much dicier proposition than it had been for the game’s running time thus far. Later, an 11-0 offensive run by the Dubs put the Cs on their heels in a way they hadn’t yet been in this contest.

Fortunately for our heroes, that was the Warriors’ last real gasp of genuine effort. The reigning champs are no fools, nor is Steve Kerr, and when the game’s outcome became clear the Dubs HC pulled his starters and effectively sealed his team’s fate.

WHAT THE HELL
Of all people for Boogie Cousins (who is generally among my favorite non-Boston players; I named a cat after him) to have smoke with, Tatum was the strangest possible choice.

It arose out of literally nothing: The Celtic sophomore accidentally nudged the mercurial Warrior while trying to pick Aron Baynes, who had just taken a charge (and, in fairness, sorta flopped) off the floor. Boogie immediately shoved Tatum with both hands. JT, unsurprisingly, didn’t react (nor should he have, IMO); Terry Rozier and Baynes quickly rushed to counterattack (inasmuch as NBA fights involve real counterattacks) and then the refs stepped in. It ended in a completely fair double technical. I only even address it here because of how weird it seemed. Bellicose as Boogie can be, the man usually starts slightly less inexplicable fights than this one.

Marcus Smart dishes to Hayward for the biggest Celtics lead of the game so far (20) (@AAANe_MAnews) #AAANortheast pic.twitter.com/fxY39M7hRK

Not a video, but, like, who cares? This is beautiful.

And last but not least: