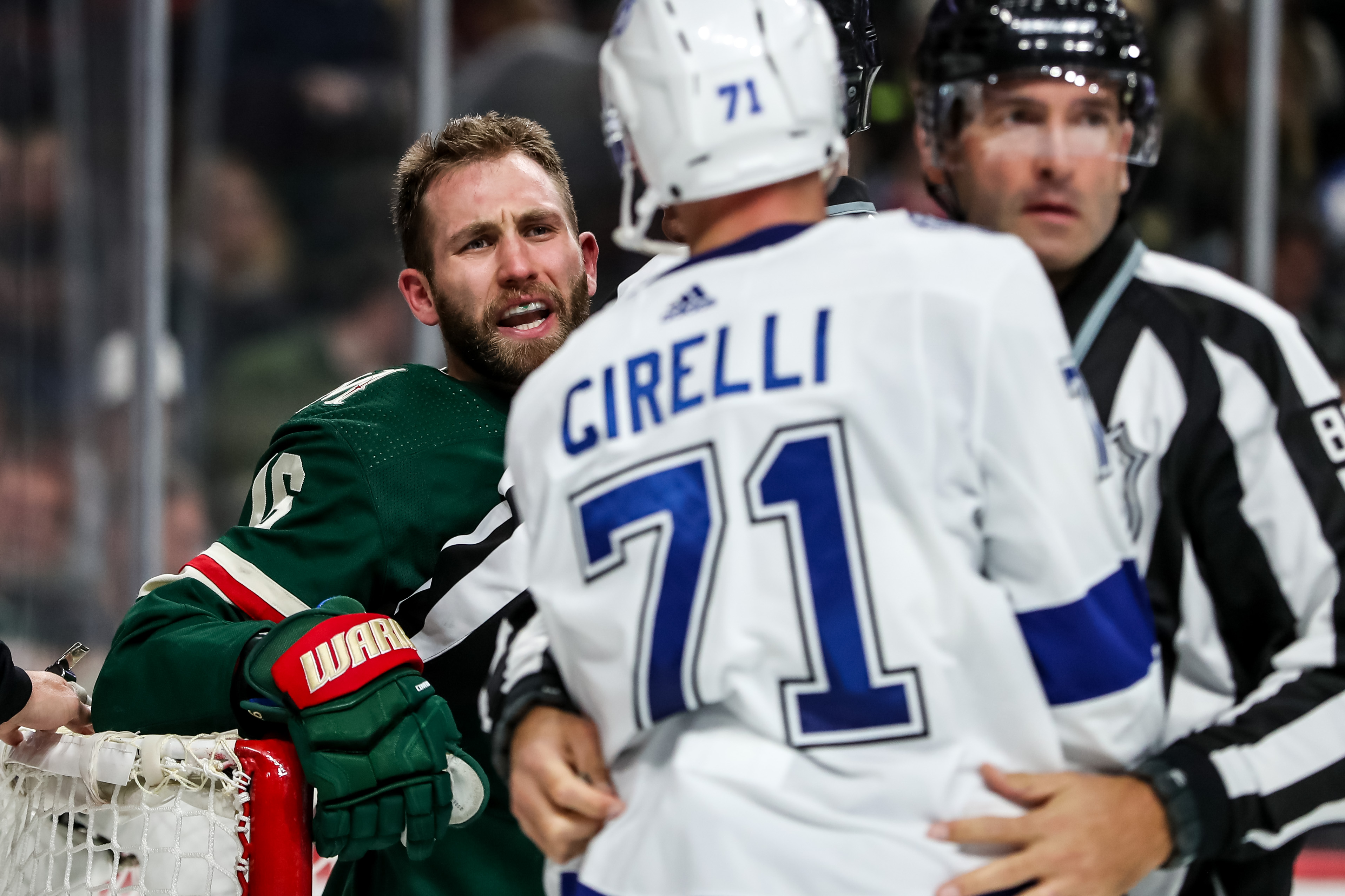 The last two games for the Minnesota Wild have taught us a few things.  One, the shootout has kind of soured on people and with identical shootout moves to lose their last two games against Nashville and they really hate it when an opposing shooter crawls up to the goalie to make a move from in close (ex . Ryan Johansen and Patrick Kane).  Second, Wild General Manager Paul Fenton may actually be right in saying that Kevin Fiala has ‘game breaker’ ability after his two goal performance on Tuesday.  We haven’t seen a snipe off a faceoff like Fiala’s 2nd goal probably since Marian Gaborik.  Lastly, Wild fans might need therapy by the time March is done as nothing ever seems to come easy for this team.  A quick look at the Wildcard race confirms that.

The extra points have been helpful at giving the Wild a 2-point cushion but one loss can put them in peril which makes the challenge that much tougher as they face off against the best team in the NHL, the Tampa Bay Lightning.

The Tampa Bay Lightning almost look like a team from my Electronic Arts‘ NHL games, currently with a 17-point lead over 2nd place Boston (who is tied with Calgary for the 2nd best record in the NHL right now) who only has 89 points.  Led by 106-point man Nikita Kucherov the Lightning are at or near the top of every major statistical category; Goals For, Goals Against, Power Play and Penalty Kill.  With Brayden Point and Steven Stamkos at 37 and 34 goals respectably along with Kucherov’s 31 they might be the first team in a long time to have three players with at least 40 goals each.  And its not without a plentiful amount of ‘secondary’ scoring with Yanni Gourde, Tyler Johnson are either past or near 20 goals this season.  Ondrej Palat and J.T. Miller are both suffering through sub-par offensive seasons but good thing for them is others picked up the slack and then some.

On the blueline, perennial Norris trophy candidate Victor Hedman leads the way for the Lightning to go along with steady Ryan McDonagh and shot blocking machines Dan Girardi and Braydon Coburn.  Younger defenseman Mikail Sergachev and Eric Cernak seem to be discovering their offensive game which only makes Tampa Bay that much more difficult to handle.

Want some more ridiculous numbers?  Consider the fact that ‘back up’ goaltender Louis Domingue has 19 wins this season.  Starter Andrei Vasilevskiy is having a Vezina trophy-like season and is a big reason the Lightning are 4th in goals against.  Of course it doesn’t hurt that your team is good for at least 4 goals in just about any given game.

So earning a win in Tampa Bay should be no problem right?!?!

All kidding aside, the Wild cannot allow themselves to be mesmerized by Tampa Bay’s speed and skill.  The Wild need to dig deep because as we said before, the standings are too close then to just throw in the towel and let a chance for any amount of points to be squandered.

Jason Zucker gave Wild fans a major scare on Tuesday when he was sort of ‘rolled up’ on by Nashville’s Craig Smith.  After being helped off the ice by the Wild training staff he’d return to the game.  The Wild need his speed and it will be interesting if he’s feeling ok to play, otherwise the team may have to have another ’emergency call up’ of Matt Read to fill in the void.  Read has been on the wherever the Wild are playing to Des Moines shuttle the last two games.

Remember, Read can only be brought up on this emergency basis, so if they don’t need him then he gets sent back to Des Moines and on Wednesday morning he was called up for a 3rd time.  Even though Zucker has had his share of struggles this season, he’s still one of the team’s most dangerous offensive threats and he and Fiala are probably the closest things the team has a to a go-to offensive option.

That means the team will continue to need the ‘kids’ to step up.  Luke Kunin, Joel Eriksson Ek, Ryan Donato and Jordan Greenway will be looked to providing a little offensive punch if Minnesota expects to get a victory.  Pontus Aberg may have scored his first goal on Tuesday, but he is a major liability defensively and all too often he lacks focus in the offensive zone.

Defensively, the Wild will lean heavily on Ryan Suter, Jared Spurgeon and Jonas Brodin to try to slow down the Lightning’s potent attack.  That won’t be easy and they’ll need Brad Hunt, Greg Pateryn and whomever Wild Head Coach Bruce Boudreau decides to go with in Anthony Bitetto or recent frequent scratch Nick Seeler.  Personally I think Seeler would be better suited to defending against Tampa Bay and I think Bitetto is far too turnover prone.

I think we can safely assume Devan Dubnyk will get the start against Tampa Bay and then Alex Stalock will probably get the opportunity to start against Florida on Friday.  If this game does go sideways in a hurry, I could see Boudreau swapping out Dubnyk for Stalock and then giving Dubnyk the start against the Panthers as well.  Hopefully it doesn’t come to that.

So what are the keys for a Wild victory?

1. Stay out of the penalty box ~ the Lightning’s offense is difficult enough to stop or even slow down at even strength but on the power play they convert at nearly a 30% rate.  With the Wild’s penalty kill as leaky and bad as it is, that is a recipe for disaster.  The Wild’s best defense of the Lightning power play is simply by not allowing it to be deployed at all.

2. Move your feet ~ the Lightning are skilled and fast from top to bottom.  The Wild must be ready to move their feet to avoid being sent to the penalty box or making this team look even faster than they already are.  I thought the Wild were not moving their feet as well early in the game on Tuesday and when they started to move better they were far more even with Nashville.  They cannot afford to get their legs a period into the game; they need to be ready to move right away.

3. Tape to Tape ~ Possession will be a big part of this game and is an opportunity for the Wild to play the game at a pace they feel more comfortable playing.  One thing that would help them with the pace of the game as well as not spending so much time and energy chasing the puck would be to use tape-to-tape passes instead of area passes.  Even if they’re short tape-to-tape passes it will likely mean less turnovers and less time spent chasing the game and that chasing often means you’ll be trailing on the scoreboard as well.  So its important they are smart with the puck.

What do you think will be important for the Wild to do in order to be successful tonight?  Tell us on Twitter @CreaseAndAssist or in the comment section below!