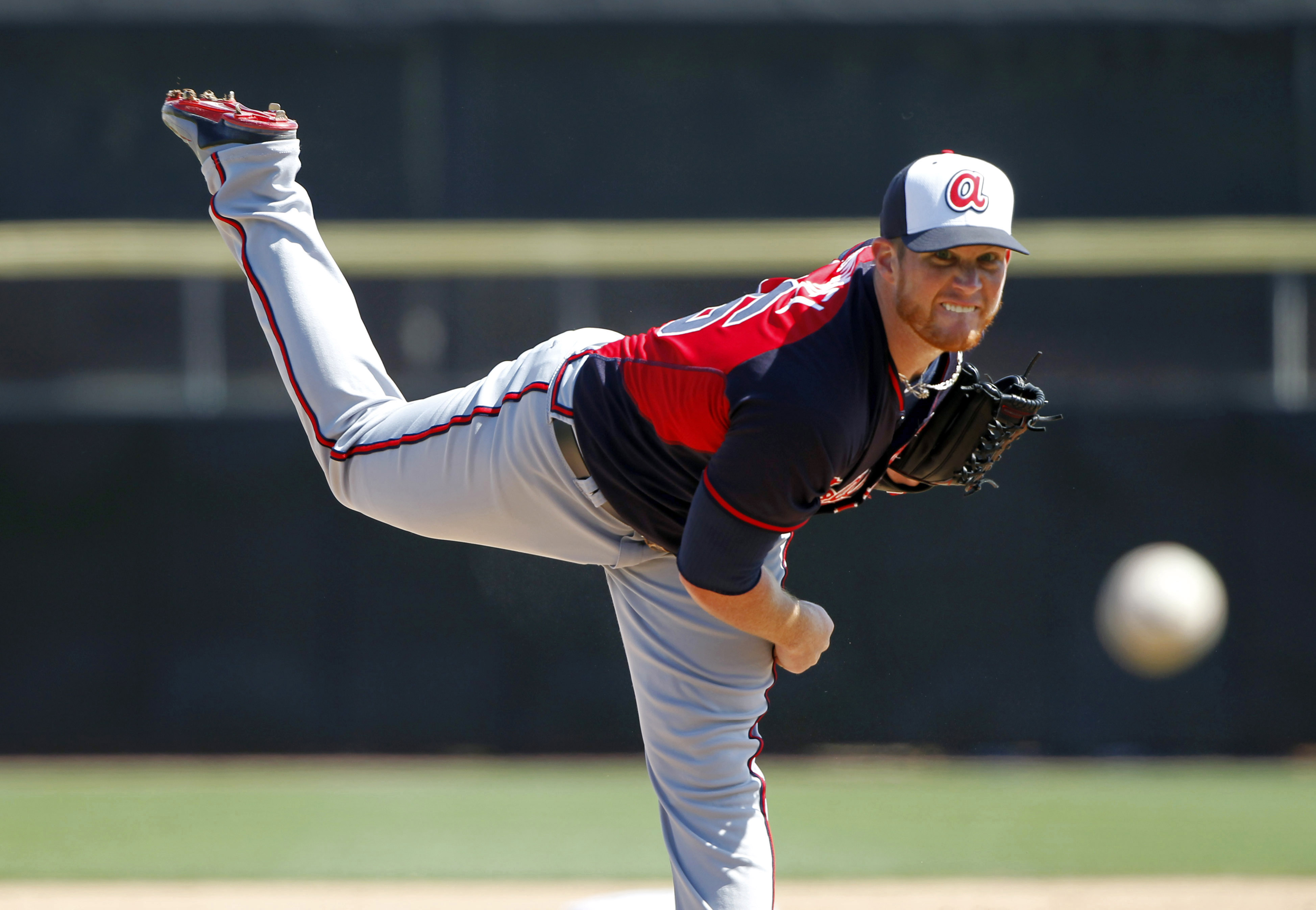 He hit free agency following a 42-save season – his fifth such season of at least that many saves and eighth straight campaign over 30 saves. As far as reliever accomplishments go, only two pitchers – Trevor Hoffman and Mariano Rivera – have ever had eight consecutive seasons of 30 saves and only Rivera did it for more consecutive years when he hit the mark nine straight years. And only three other relievers even had 30 eight different times in their career. Kimbrel has the historical accolades on his side.

He also saw other closers with far less accomplishments turn their free agent experiences into long-term deals worth a lot of money. Arodis Chapman received an $86 million contract over five years. In Los Angeles, Kenley Jansen received an $80 million contract over five years. Wade Davis beat Chapman’s average annual value for a closer when he signed a three-year, $52 million contract last winter, giving him an average of $17.3 million. Mark Melancon is making a $15.5 million average salary in his four-year contract, signed during the same offseason that Chapman and Jansen got their new deals (following the 2016 season). Zach Britton just received a $39 million deal over three years to be a setup reliever for Chapman.

And yet, with starters working through their second spring start, Kimbrel remains unsigned.

You really can’t blame teams, either.

Think of the deals I just mentioned sans Britton. That leaves Chapman, Jansen, Davis, and Melancon. Let’s start with Melancon. He’s been hurt for much of his first two years, throwing just 69 not-so-nice innings. He hasn’t been bad, but 14 saves and a 3.78 ERA is hardly a solid return on investment. Jansen was tremendous in 2017 during the first year of his new deal, but regressed in 2018 with his worst FIP (4.03) of his career. His worst FIP before 2018? 2.40. That’s a big jump and because FIP is often used as a stat that helps predict likely future performance, that’s a troublesome number. Chapman has been good, but he too has seen regression and hit the DL each of the last two years. Davis led the NL in saves last year, but also posted his worst ERA since moving to the pen.

Major league general managers can be dumb, but they rarely are that dumb to keep betting tens of millions of dollars into a position with so much volatility – especially if they don’t have endlessly deep pockets. Britton’s $39 million this winter remains the most significant investment into a reliever. Five others received deals within $7M of one another with Jeurys Familia’s $30 million representing the high end and David Robertson’s $23 million representing the lower end. Only three others even reached the $10 million mark in overall contract value. And this winter also included All-Star level relievers like Adam Ottavino, Andrew Miller, Joe Kelly, and Kelvin Herrera.

The Braves have not got involved at all on the reliever market. They did, of course, add Darren O’Day to the mix in last summer’s deal that also acquired Kevin Gausman. O’Day didn’t pitch for Atlanta as he worked his way back from a hamstring injury, but is set to join the Braves’ pen this season. He’s expected to give the Braves another high-leverage arm to go with Arodys Vizcaino and A.J. Minter. Lefties Jonny Venters and Jesse Biddle, along with righty Daniel Winkler, are also part of the core of the projected Braves’ pen that, if you squint your eyes, it could be a real plus for the Braves. Or it could be a real negative. Suffice it to say, there are plenty of question marks. Shane Carle, Sam Freeman, Luke Jackson, Chad Sobotka, and Grant Dayton are also battling for a spot and others, like Max Fried, could be x-factors if the Braves don’t use them as starters.

The Braves pen is like the cast of Lost. It’s big and you like some of them very much even though they have flaws. And others are like Ana Lucia. I’m not saying you want them killed off, but if they are no longer part of the show, you won’t shed any tears.

Kimbrel appears like a perfect fit. With him in the ninth, the high leverage trio of Vizcaino, Minter, and O’Day are working the setup frames. Venters, once Kimbrel’s primary setup guy, would be less likely to be utilized in a role he’s less useful in and can provide specialist work against left-hand batters – until MLB idiotically does away with left-hand specialists. Biddle and Winkler, who were used in high-leverage situations out of necessity in 2018, provide quality depth in lower-leverage roles. Assuming an eight-man pen that’s healthy, that leaves one more spot.

Yet Kimbrel and the Braves don’t seem close to getting back together. The biggest reason? Neither sides appear close on potential contract length. Kimbrel, who turns 31 on May 28, wants a long-term deal – at least three years or longer. The Braves, who haven’t signed a player to a guaranteed two-year or longer deal since Alex Anthopoulos took over, have balked at doing so with Kimbrel. While the two sides seem to be interested and Kimbrel seems to be creeping around the Braves spring training, neither side has been willing so far to come off their demand.

It’s easy to say that Kimbrel should just take the one-year deal, hope the market is far more interested in him next winter, and try to land a 2-to-3 year contract then. Like I said, that’s easy to say since there are no promises that the market will be any better, Sean Doolittle will be out there as a potentially cost-saving option, and an injury could derail any hope Kimbrel has at securing a long-term deal. At least now he has the durability argument.

Kimbrel has another question hounding him. Is he already in decline? While Braves fans remember the automatic Kimbrel (his FIP was between 0.78 and 1.93 as a Brave), save for one truly excellent season in 2017, Kimbrel has been sliding back to mortal status. To be fair, even if Kimbrel is declining, when your prime is so high, a typical decline still leads to many productive years. Even in a year that has many Red Sox fans skittish of bringing back Kimbrel, he still posted a 1.5 fWAR on the heels of a 2.74 ERA and 3.13 FIP. He did average under 98 mph on his heater for the first time since 2013, but 97.5 ain’t bad.

In the end, we know that there is a very small chance of Kimbrel getting the long-term deal he hoped for that would mimic ones signed by Jansen and Chapman. He still could land a Wade Davis type deal where he sets a new bar for the top yearly salary for a reliever, but doesn’t get promised a four-year deal. Even a three-year pact might be too much for the Braves to consider, though. Beyond their lacking interest in long-term deals at all – search for “financial flexibility” on Twitter and 85% of the recent posts are about the Braves – the team is simply not going to devote significant chunks of future payrolls into an aging reliever.

So, there’s the impasse. I can’t imagine the Braves don’t want Kimbrel. They just want him on their terms (two years max guarantee with a potential option added on). And you can’t really blame them, right? Or Kimbrel for wanting more.

Both probably want a deal, but can’t seem to close on one. Here’s my effort to manufacture one for them then.

Don’t tell me the Braves cannot afford this. They currently are $4 million under last year’s payroll, have suggested potential payroll can increase and will continue to do so each year, and have been willing to add significant salary the last few years in the season. Kimbrel makes it harder to add on during the season, but not impossible. They’ll be at about $132 million after signing Kimbrel. Get creative and make $4M of his 2019 salary a signing bonus that gets moved to next year’s payroll if you have to.

This is complicated and the Player’s Union would probably not like this kind of deal. It’s a more nuanced version of the kind of long-term deals we’ve seen where a team gets an extra year on a contract at a small price if a player suffers an injury. Kimbrel could simply opt-out from this part of the contract if he has a strong 2019 and try his luck again. Or he could bet on himself that’d he reach the incentives, stay healthy, and stay where he appears comfortable.

That’s my compromise. What’s yours? Should the Braves not even consider Kimbrel or should they give him a long-term deal that is far less complicated than the one I came up with? Let me know here or on twitter. And remember to share on social media!