RECAP 67: The Sound of Separation. Kessel Scores, Murray Shines, And The Pens Get Some Separation in 3-0 Win Over Jackets 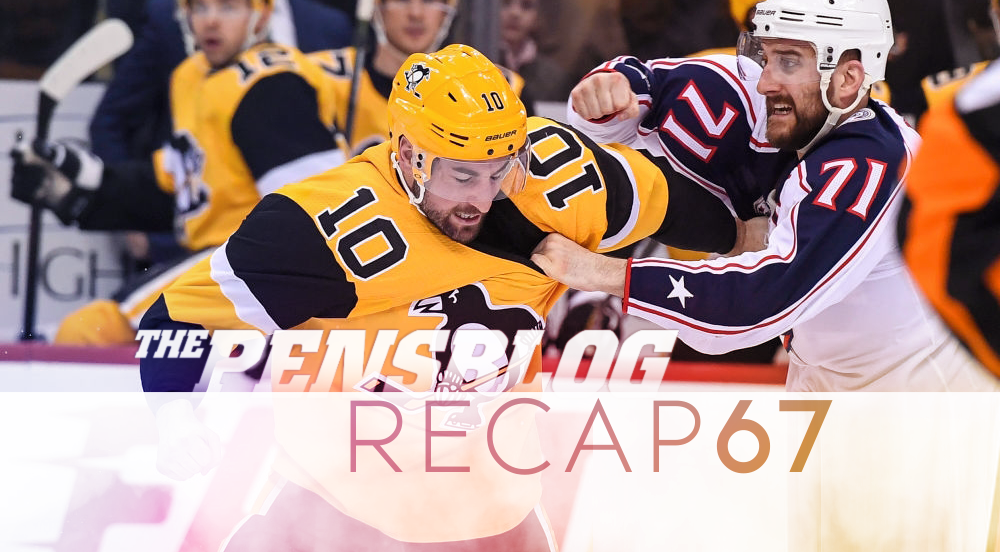 RECAP 67: The Sound of Separation. Kessel Scores, Murray Shines, And The Pens Get Some Separation in 3-0 Win Over Jackets

This sport is so inexplicably weird sometimes in the best damn ways.

On one side of the ice, you had a team coached by a guy that tried to get cute and sit his two-time Vezina-winning goaltender in the pressbox for….reasons.

At the other side of the ice, you had a coach that just sent his team out there with the instructions to play a smart, simple game.

If you ignored the title and didn’t watch the game and relied solely on your spreadsheets, which strategy would you have expected to get the win?

The data backs this up.

That said, this shit is all forgotten if Bob comes out on Saturday and shuts out the Pens, but in terms of the biggest micro-analyses in the world today, it’s far and away the most suspect decision we’ve seen made since Jack Johnson was given a 5 year contract.

But as it stands right now, the Pens are in sole possession of 3rd place in the Metro (81 points from 67 games, 4 points back of both Washington and NYI – 85 from 67) and have gone 10-2-1 in their last 13 against Metro Division opposition.  Carolina is lurking with a game in hand on 79 points and Columbus (77 from 67), remains on the outside looking in.

Saturday seems as good of a day as any to make that 11.

Lined up and ready for battle.

With the season winding down and the points becoming more and more precious, HCMS opted to run with the same lineup that got it done on Tuesday night at the Paint Can.  As mentioned, Torts inexplicably scratched Bobrovsky in favor of letting Kinkaid back up Korpisalo in what was meant to be the biggest game of the season for both teams to date.

Right off the hop, you just knew in your loins that this had that playoff feel to it as neither team really wanted to give the other an inch.  But 2:04 into it, Scott Harrington got a little overzealous in trying to maul someone opposite him, getting rung up for tripping Bjugstad.

The Pens PP unit, which came into this game having scored on 4 of their last 8 opportunities, spent less time getting that fifth than Daniel Sprong spent on the ice the night before.

PP1 moved the puck around the perimeter, going from low to high for a Jultz blast that found only Malkin’s body.  He corralled it as Korpisalo kicked it behind the net to him and fed Phil! at the side.  Phil! looks like he’s just trying to get it in front to Hornqvist, but the puck had other ideas, going in off Korpisalo to give 81 his first since January 30th.

Think these guys were happy about Phil! finally burying one?  Geno’s little hop deserves its own exhibit in the Smithsonian.

Following the goal, the Pens had a small stretch of controlled play before Garrett Wilson died from blocking a shot and was reincarnated just in time for the physicality to really start picking up.  But then, with the Jackets turning the tide McQuaid went to the box with 7:10 left for high sticking Phil! in the neutral zone.

They did jack dick with it and the Jackets kept coming.  But Murr was on top of it all.

Two insanely difficult saves here.  The first one, Anderson just wired a rolling puck that could’ve gone anywhere and done anything when it left his stick.  The second one, with Jenner and Foligno stirring the pot in front, Murr has to track the point shot through them, Gudbranson, and Blueger to get his toe on it and cover it up.

Pens went the final 11+ minutes of the period without a shot on goal, registering just 4 for the period.  Outside of the first 5-7 minutes, CBJ controlled the 1st.

And with 11 seconds left in the 1st, Jultz went off for interfering with Atkinson, giving the Jackets 1:49 of 5v4 time to play with on a fresh sheet of ice to open the 2nd, but a big time kill was the end result.

But following a Malkin chance on a breakaway and a shot squeaking through Korpisalo and sitting in the blue paint, Guentzel found himself in the box for high sticking McQuaid to give the Jackets another chance to tie this B up, but they did not do that thing again.

Emotions started running high, McQuaid and Hornqvist got into it, but it was Wilson and Foligno dropping the mitts at center ice for some reason.  Could’ve been a big turning point for the Jackets had they gained anything from it.

Five minutes later, a shift after Guentzel was felled from a blocked shot of his own, Money Bag came back out on the ice and was cross-checked from behind by Werenski in a really dangerous area of the ice.  Dirtbag play that went unpenalized, aside from Dubois and Bjugstad getting matching roughing minors in the aftermath.

Werenski with a really bad cross-check from behind on Guentzel in a really dangerous area of the ice. Yikes pic.twitter.com/DjhOSvGnTh

As the period wore on and the game started opening up a bit, it was the goalies at either end of the ice that were shining.

Unfortunately for one of them, everything that shines eventually turns to shit.

Because late on, it was the Pens 3rd line doubling their lead to send them into the 3rd period up 2.

Stemming from a D-zone draw, Johnson jumped in from the right wall to win it for Jugs and hit McCann to lug it up ice.  This line had one mission: get the puck in deep and go to work.

Hornqvist got in on the dump, forced the turnover for Jugs to try to sling one backhand-shelf.  He couldn’t and Hornqvist couldn’t slam home the wraparound attempt on either side of the net, but with the Jackets panicking and running around, the biscuit kicked out to Jultz for the point shot.

RTJ picking it up froze the Jackets, all of whom were out of position.  Watch as Schultz picks up the puck here.  There are 3 Jackets planted in front of Korpisalo worrying about Hornqvist, one jailbreaking out to RTJ, and one shadowing Johnson.  Schultz had enough of a passing lane to land an attack helicopter in the open space and used it to find McCann at the far circle.  McCann had time to control and find Jugs in the high slot for the big man to bring out the Johnny Gaudreau level of shiftiness to cut and slip one five-hole on Korpisalo with Hornqvist creating the space in front of him by straight dummying Harrington.

With the Pens going into shutdown mode, Foligno went off for elbowing Blueger just 2:47 into the period.  Right off the faceoff to kick off the PP, Joone Benner went off for 4 minutes for high sticking Crosby and drawing blood, giving the Pens 1:55 of 5v3 time.

Columbus survived the extended 5v3 and the 2+ minutes of 5v4 time, largely because of the play of Korpisalo, leaving the Pens as one of 8 teams that haven’t scored a 5v3 goal this season, having gone 0 for 7 on the year.

As a result of the extended PP time, CBJ didn’t register their first shot of the 3rd period until just over halfway through the period.  But about 3 minutes after that first shot, Hornqvist found himself in the box for high sticking McQuaid.

From there, it was the Matt Murray Show.  When he’s out here reading the play like this, there aren’t many goalies on Earth better than him.  Makes this save on Panarin on the PP look effortless.

Then, with over 2 minutes to play, Torts gots got Korpisalo out of the net for the extra skater and 87 sealed it.

Been a minute.  Spin it, kiiiiiiiids.

Kessel walked into locker room, saw the media gathered at his locker, sighed and said "I score one goal…"

Kessel on the standing ovation: "The fans and the city have been great to me since I've been here. I love playing here. I have unbelievable memories here. They've been nothing but supportive and I really appreciate it." -SK

Big weekend ahead as the Pens head west on I-70 to wrap up this home-and-home before hosting the Bruins at the Paint Can on Sunday.  Washington and Buffalo looming midweek, too.  Do it.  Go Pens.