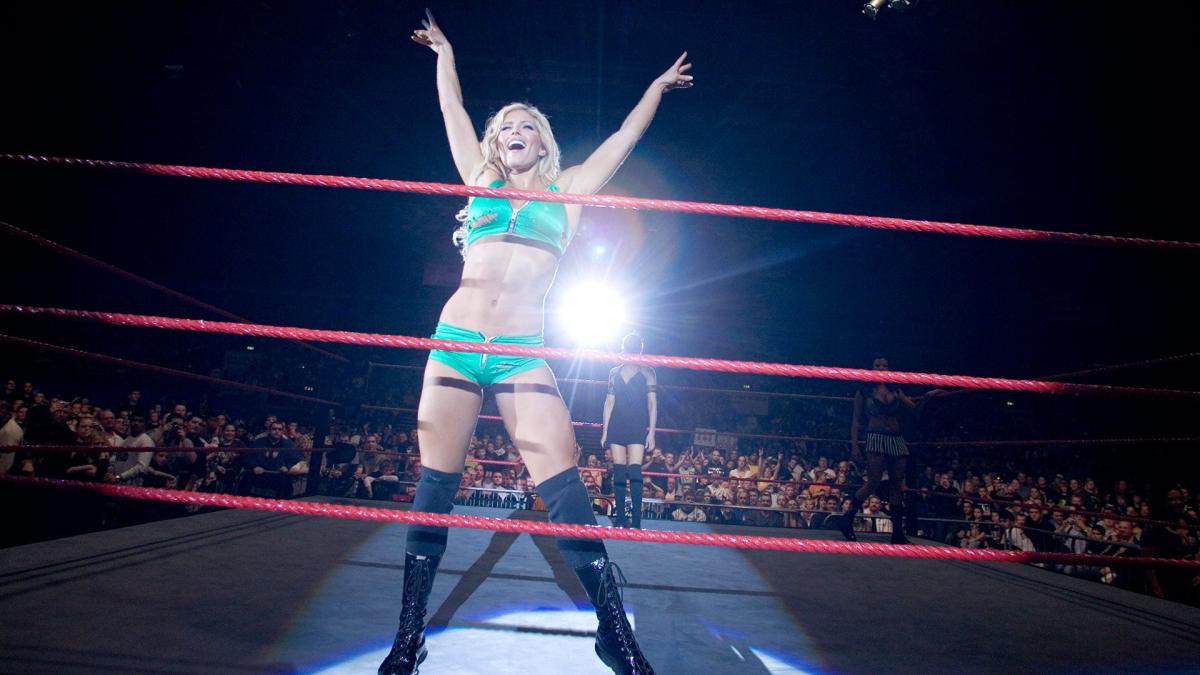 From fitness model to Miss Galaxy to the world of professional wrestling, Torrie Wilson has produced quite the story for herself. It has all led up to her becoming just the 12th woman in history to be inducted into the WWE Hall of Fame, excluding those in the Legacy category.

Wilson’s inclusion into the class of 2019 has caused quite a stir on social media with many wrestling fans being less than congratulatory toward the former diva.

“Fear kind of runs our world. And immediately when I hung up the phone, I sat there and thought like, I basically started putting together this list of all the things I’m not. I was never a champion, I could really just start – I could do much better than my haters about beating myself up. And then I had to put myself in check, and say, you know, but there are a lot of things that I am.”

WWE fans are quick to point out that Torrie never won a title and she only competed in things like lingerie matches and costume contests. However, those matches during that era are part of WWE history and it’s nice to see that WWE has chosen not to ignore it.

Well they will have their time. This is hers. So we should celebrate it. https://t.co/7iBSYpbQUO

Whether you were a fan of those things or not, they were highly popular during that era and for her part, Torrie was quite good.

Wilson made her debut in WCW back in 1999 almost by accident. She went to a show with her then boyfriend and the two managed to get backstage. She was immediately approached about possibly being part of the show when she caught the eye of Kevin Nash.

She was used mainly as a valet to David Flair and then Billy Kidman, who would later become her real-life husband. She was released from WCW in December 2000.

Following WWE’s purchase of WCW, Wilson was brought back to television. After a brief storyline in which she played a new love interest of Mr. McMahon, she formed an alliance with former WCW star Stacy Keibler.

At the InVasion pay-per-view event in July 2001, Wilson and Keibler faced Trish Stratus and Lita in a tag team bra and panties match in a losing effort. Three of those four women are now in the Hall of Fame.

One of the things Torrie is most remembered for is being the love interest/valet of Tajiri. The two formed a pairing that many fans adored.

Following this, Torrie entered into a feud with Dawn Marie, a program that included many bikini contests and things of that nature, but one that is most remembered for Dawn entering into a storyline romance with Al Wilson, Torrie’s father. This included Dawn and Al having a wedding on an episode of SmackDown.

In May 2003, Wilson was chosen to appear on the cover of Playboy magazine. This led to much publicity for WWE and gave Wilson some fresh new feuds on television.

It also led to the return of Sable, who once appeared in Playboy herself and had been out of WWE for over four years. The two engaged in a memorable feud but by WrestleMania 20, the two were on a team when they faced the duo of Keibler and Jackie Gayda in a Playboy Evening Gown match.

Wilson and Sable were victorious.

In the summer of 2005, Wilson would form an alliance with both Candice Michelle and Victoria. The three played the role of heels and feuded with both Ashley Massaro and Stratus for quite some time.

Later that year, Candice and Victoria turned on Torrie. Candice would then be announced as the latest Playboy cover girl, leading to a Playboy Pillow Fight between her and Wilson at WrestleMania 22 in which Wilson was victorious.

Torrie continued to work as a valet for Superstars such as Carlito and Jimmy Wang Yang while competing in the occasional bikini contest or divas battle royal until May 2008, when WWE decided to end its relationship with her.

Torrie subsequently retired from the business but made a handful of appearances following that.

She was part of the Miss WrestleMania battle royal at WrestleMania 25 and appeared as a guest on the 25th anniversary of Monday Night Raw. Following that, she participated in the first ever Women’s Royal Rumble match.

Torrie Wilson to be inducted into WWE's Hall of Fame 2019 class https://t.co/74JkMEtUZW pic.twitter.com/HPrvJvxzm6

At WWE Evolution this past year, she took part in a battle royal.

Wilson may not have found success in terms of winning titles and she may not be remembered for her in-ring prowess, but there is no doubt she made a lasting mark on the industry.

Torrie never planned to become a wrestler. She more or less fell into a career by being in the right place at the right time. At the end of the day, WWE is an entertainment business and Wilson just played the role she was asked to play.

She did that well and as a result, she’s more than deserving of this honor.

From all of us here at The Floor Seat, we would like to congratulate Ms. Wilson on this honor.