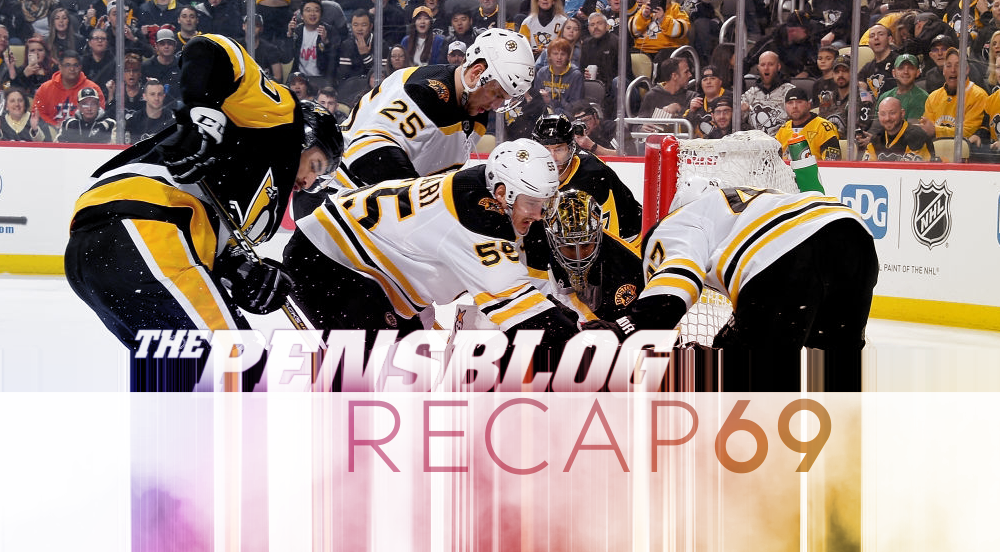 Boston. The city that seems to win everything except for the fact that the Bruins haven’t done so in almost a decade (they last won a Stanley Cup eight years ago, to be specific). You wouldn’t know it, though, if you happened live in Masshole land (shoutout to G) since everyone who resides up there walks around like their shit doesn’t stink and talks like that douchebag Mark Wahlberg.

Well, I got news for you, Bruins fans. The Bruins aren’t as good as you think they are, and they aren’t going to win a Stanley Cup this year just because they’ve secured a point in each of their last 19 games.

After suffering their first regulation loss in seven games last night courtesy of the Blue Jackets, Mike Sullivan decided to make only one minor adjustment to the Pens’ roster by swapping Jared McCann to the first line in replace of Dominik Simon. Also, interestingly enough, Matt Murray gets the nod in back-to-back games after turning on God-mode last night against CBJ in a losing effort. Perhaps a risky move by Sully to bypass giving Murray a little rest, but at this point in the season where the Metro is tighter than your asshole in double OT of Game 7 of the 2017 ECF and where every point is crucial, it’s win now or fuck off. Just can’t trust DeSmith in these types of situations.

Who gives a fuck?

I take that back. Here’s a friendly reminder of what happened to Jaroslav Halak the last time the B’s played in Pittsburgh this past December:

Another HUGE two points up for grab. Let’s get to it.

A bounce here and a bounce there and into the net. Fifth goal in 19 games credited to Bjugstad since coming over from Florida gets the good guys on the board.

Over the next ten minutes, the Pens would get a pair of PP opportunities and ultimately manage to get only two shots on goal, including squandering a Grade A shorthanded opportunity to the big-nosed asshole but Murray would say no way, Jose.

Midway through the second half of the last ten, it was the B’s turn to go on their first PP after Schultz got whistled for the dumbest rule in hockey after flipping the puck over the glass. And unlike Marchand and his giant nose, the Pens would capitalize with a shorthanded opportunity of their own.

Just an absolutely solid play from start to finish from Jared McCann. After forcing Krejci to turn the puck over at the point, he quickly races down the other end where Blueger finds him all alone for the breakaway and makes no mistake about it.

In case you’re still wondering whether or not the Pens won the Florida trade, take a look at the numbers:

Nick Bjugstad: Five goals in 19 games with the #Pens.

Jared McCann: Seven goals in 19 games with the Penguins.

Derick Brassard: 12 goals in 54 games with the Penguins (three in 14 games last season).

Riley Sheahan: 18 goals in 122 games with the Penguins.

And here’s the crazy part – McCann’s been by far and away the better player so far. Credit this one in the W column for GMJR.

After a delay of game call on Jared McCann late in the 1st, the Bruins would start the 2nd period on the man-advantage and come up dry. However, just a couple minutes later, thanks to a Tach Zrotman slashing call, the B’s would get their third crack on the PP and ultimately capitalize thanks to noted Penguins-killer David Krejci.

Gotta give credit where credit is due – hell of a play by Krejci to quickly settle the puck down on his backhand before quickly transitioning to his forehand and burying the puck into the open net. Also have absolutely no idea what Gudbranson is doing here.

A few minutes later, everyone’s favorite player that people pretend to care about, Patrice Bergeron, would get called for the dumbest penalty in hockey (delay of game) for sorta, kinda flipping the puck over the glass in his own zone. It appeared as though the puck deflected off of Sid’s stick before going into the stands, but this is the NHL where reviews are only for goals, goaltender interference, and offsides that can take place minutes before a puck even goes into the net so if it’s a penalty on the ice, the camera isn’t as smart as the ref. But I digress.

After squandering their fourth man-advantage opportunity in a row, the fifth PP would finally be the charm for the Pens.

Right as the Bruins almost tied the game at two with another grade A shorthanded opportunity involving Marchand, Sid quickly recovered the failed pass the other way and traveled over 100 feet to find Jake racing to the doorstop for the roof job.

So much fun to watch these two play right now. They simply cannot be stopped.

Crosby and Guentzel continue to amaze

Highlights of the 3rd period:

– Zach Trotman sucks and got another penalty. Pens killed it.

– John Moore tightened your butthole for about 15 seconds whenever he scored during the 19th minute of the period.

– Show this clip to any and every Masshole you encounter with On Line over the next 24 hours:

– I’m starting a petition to keep Jared McCann on the top line with Sid and Jake for eternity.

For all the criticism GMJR has absorbed the past two seasons — some of it deserved, some not — let’s give him credit for this: The trade for Bjugstad and McCann was just what the Penguins needed.

Pat is also correct with his take:

This, on the other hand, is not a correct take:

matt murray made his 8th straight start tonight – over that stretch (including tonight) he's at .961 save%. is that good

This also left G with an opportunity to dunk on Josh.

For all the criticism Matt Murray has absorbed the past two seasons — some of it deserved, some not — let’s give him credit for this: He’s really good and just what the Penguins needed. pic.twitter.com/b2PPKuODV0

Just a couple of boys playing twitter basketball lolz. Credit Josh for not calling any fouls – a true man of honor and integrity.

Those assholes come to town on Tuesday night.

Hold on to your dick!