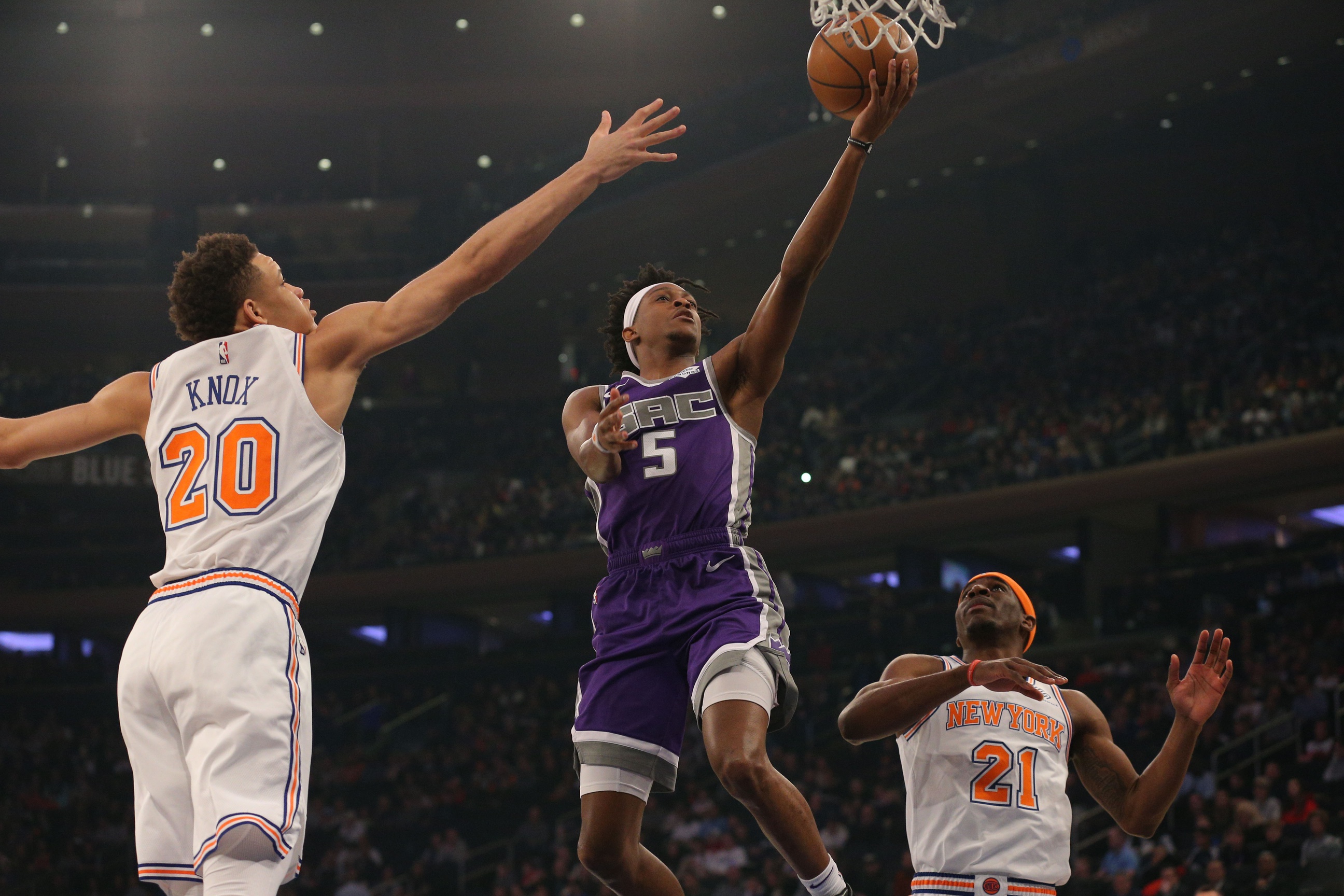 A month from today the NBA’s 2018-19 regular season will be over. Another 1,230 games in the books. Without getting too far ahead of ourselves, how do the worst of the worst stack up against one another heading into the final fifth of the campaign?

What was supposed to be a thrilling Western Conference playoff marathon featuring a photo finish has unfortunately morphed into a mere limp to the end-line, with the still-surprising ninth-seeded Sacramento Kings being the lone squad outside of the conference’s top eight boasting at least a one percent chance (at three percent) of crashing the party, per FiveThirtyEight.

If the Kings don’t spark joy in your soul, then you must have made a deal with the devil. De’Aaron Fox’s pop-a-shot floater is delightful, and the fast, fun and fierce sophomore has given Sacramento an identity for the first time in 15 years. Buddy Hield is probably putting in work as we speak. Harry Giles has gotten his groove back after years of injuries. Bogdan Bogdanovic is making Bojan Bogdanovic proud, and they aren’t even brothers. Marvin Bagley, aka super-sized Thaddeus Young, is enjoying a strong rookie season.

The good: Karl-Anthony Towns has been crushing it ever since the Jimmy Butler trade and the team remains optimistic about his injury status.

The ugly: Andrew Wiggins is regressing.

Perhaps this is rock bottom for the 24-year-old wing. It’s perfectly reasonable for folks to jump off the Wiggins bandwagon, and many, perhaps wisely, abandoned ship a long time ago. There’s still time for him to progress though, even if he’s never worth his huge contract. I think we can all agree this offseason will be extremely important for the former first overall pick.

But who’s to say the Wolves wouldn’t be a playoff club if RoCo were healthy? Dario Saric has been a splendid fit next to KAT and Covington was a godsend in 22 games before getting hurt.

Those bemoaning the lack of tanking at the bottom of the standings in light of the revised lottery odds should tune into the Mavericks, losers of 10 of their last 11 games. Dallas is currently the sixth-worst team in the league and will convey their 2019 first round pick to Atlanta (top-five protected) unless May 14 proves to be their lucky day. Is there any way they can catch the Hawks (fifth-worst record), who are 5.0 games worse but have gone 17-22 across the last 39 games? I doubt it. But regardless of what happens with that draft pick, the Luka Doncic and Kristaps Porzingis-led Mavericks will enter the 2019-20 season as the one of the league’s most intriguing young teams.

Sign me up for the Trae Young, Kevin Huerter and John Collins show. In the last edition of the powerless rankings, one of the few (perhaps only) things I nailed was my assessment of the conversation surrounding Young. The guy has a chance to be one of the best offensive players we’ve ever seen, and that’s not hyperbole. He’s not going to be as well-rounded as Steph Curry, who’s a better defender than he’s given credit for, but Young could absolutely be as good as (or better than) Nash. Meanwhile, Huerter may never be an elite defender like Klay Thompson, and it’s unrealistic to expect him to match his three-point shooting prowess either. But Kevin could very well become a superior ball-handler and distributor, two areas where his skill was overlooked coming out of college. And Collins probably isn’t going to develop into an evil genius or elite playmaking big man like Draymond Green, but modern-day Amare’ Stoudemire with better defense is in the cards. I think I’m rooting for the Hawks to win the Zion sweepstakes.

The Pelicans should be the first thing that comes up when one Google searches powerless. However, New Orleans has, perhaps unsurprisingly given the area’s reputation, remained extremely resilient despite the never-ending Anthony Davis drama. Folks were quick to pronounce the team dead upon his trade request, but they’ve hung tough, rallying around their new face of the franchise, do-it-all-star guard Jrue Holiday and ripping off wins against the Rockets, Thunder, Lakers, Nuggets and Jazz. Undrafted forward Kenrich Williams should’ve cracked the rotation from day one this season, but otherwise I can’t really complain about the job Alvin Gentry has done. I’m looking forward to seeing what type of return New Orleans nets in exchange for Davis, and who they end up with in this summer’s draft.

The Grizzlies, who forfeit their first-round pick if it’s not in the top eight, better be careful. Right now, they have the eighth-worst record in the league, but they’ve won three games in a row. Meanwhile the Lakers have apparently gone into hibernation mode, and Pelicans guard Jrue Holiday is injured at the moment. Beyond the fear of losing their pick there have been some positives. For one, Jonas Valanciunas is playing the best basketball of his career, and he’s still young enough that his timeline matches up with young star-in-the-making Jaren Jackson’s. It will be interesting to see whether Memphis ultimately decides to trade or keep Mike Conley this summer.

Jeanie Buss has turned to whataboutism in her attempt to defend the franchise’s failures, scapegoating the media and opposing teams for the fact that the Lakers are going to fall short of the playoffs despite employing LeBron James. They’ll probably spread the blame around a bit more and fire Luke Walton once the season is finished. If Los Angeles does end up acquiring Anthony Davis in exchange for every young piece on the roster, will Buss walk back the “fake news” rant and apologize? Don’t hold your breath. But the Lakers themselves are responsible for letting Brook Lopez leave without expressing interest in free agency. They let Thomas Bryant go. In short, the Lakers are not victims to anything but bad luck (LeBron’s injury) and their own poor roster construction. We’ll see whether they waste the last few years of LeBron’s prime, but for James’ sake, let’s hope not.

New York’s future is tied to a couple grumpy superstars (Kevin Durant, Kyrie Irving) and May 14, 2019. Super-team or not, I wouldn’t part with Zion Williamson in a trade if the Knicks win the draft lottery—even if it meant passing on the chance to pair Anthony Davis with Durant and Irving. Regardless of how you feel about the Kristaps Porzingis deal, New York is in position to swing for the fences this summer, and they’re gambling big like Mitchell Robinson hunting for blocks. It’s hard to judge them too harshly until we see where the chips fall, but the continued presence of James Dolan (who insists he isn’t selling the team) doesn’t inspire much confidence.

The Eastern Conference playoff picture is less solidified but certainly starting to take its shape, with the Detroit Pistons (34-31) and Brooklyn Nets (35-33) firmly occupying the sixth and seventh spots, respectively, while the eighth-placed Miami Heat (31-35) are hobbling a bit more effectively than the Orlando Magic, Charlotte Hornets and Washington Wizards.

Orlando’s magic tricks are more impressive than Gob Bluth’s, but barely. Still, they’ve been beating top teams lately (Warriors, Bucks, Raptors and Pacers since the All-Star break) and I refuse to vacate Jonathan Isaac Island. So while I’m not doubling down and buying more stock, I’m not selling mine either. FiveThiryEight calculates Orlando’s playoff odds at 66 percent, higher than the Heat (29 percent) and not much less than the Nets (82 percent). Playoffs or not, though, there are more questions than answers for the Magic.

Otto Porter was one of the best trade deadline acquisitions league-wide. Now complemented by a borderline All-Star 3-and-D wing, Zach LaVine has been taking better care of the ball lately, improving his assist-to-turnover ratio while offering hope that he could shift to point guard full-time going forward. It’s also overdue that I admit I was wrong about Lauri Markkanen, who just might be quick enough to handle the power forward spot defensively alongside Wendell Carter in a super-sized frontline. Suddenly Chicago’s overall outlook isn’t so shaky anymore.

The Suns have won four of five and five of seven—including victories over the Bucks and Warriors—which helps distract the eyes (and nostrils) from the goat shit stains. While Phoenix is not a free agent destination (not even close), even those in doubt (myself included) have to concede the Suns could actually be in the process of building something.

Kemba Walker and company have a 17 percent chance of making the playoffs. Despite Walker’s repeated insistence that Charlotte is home (in fairness it has been his home for years) and he expects to stay put (he probably does), no one could blame him his eyes for wandering. If the Hornets miss the playoffs and miss out on Zion, something tells me Walker is as good as gone. I, for one, am not ready to see Walker don a different uniform, so here’s to hoping one of those two things happens for the Hornets.

Tomas Satoransky and Bradley Beal have continued to blossom and Thomas Bryant has burst out onto the scene. But Washington’s front office just continue to make too many puzzling decisions. Not long after trading Kelly Oubre away because they didn’t want to pay him, they traded Otto Porter for Bobby Portis, whom they’ll probably be forced to pony up for this offseason. Based on management’s questionable track record, it’s hard to hold out hope that this Wizards team has a bright future going forward.

Lacking both the allure of New York and the promising young talent of Phoenix, the Cleveland Cavaliers are down in the cellar behind the axe. Only Zion can save them.