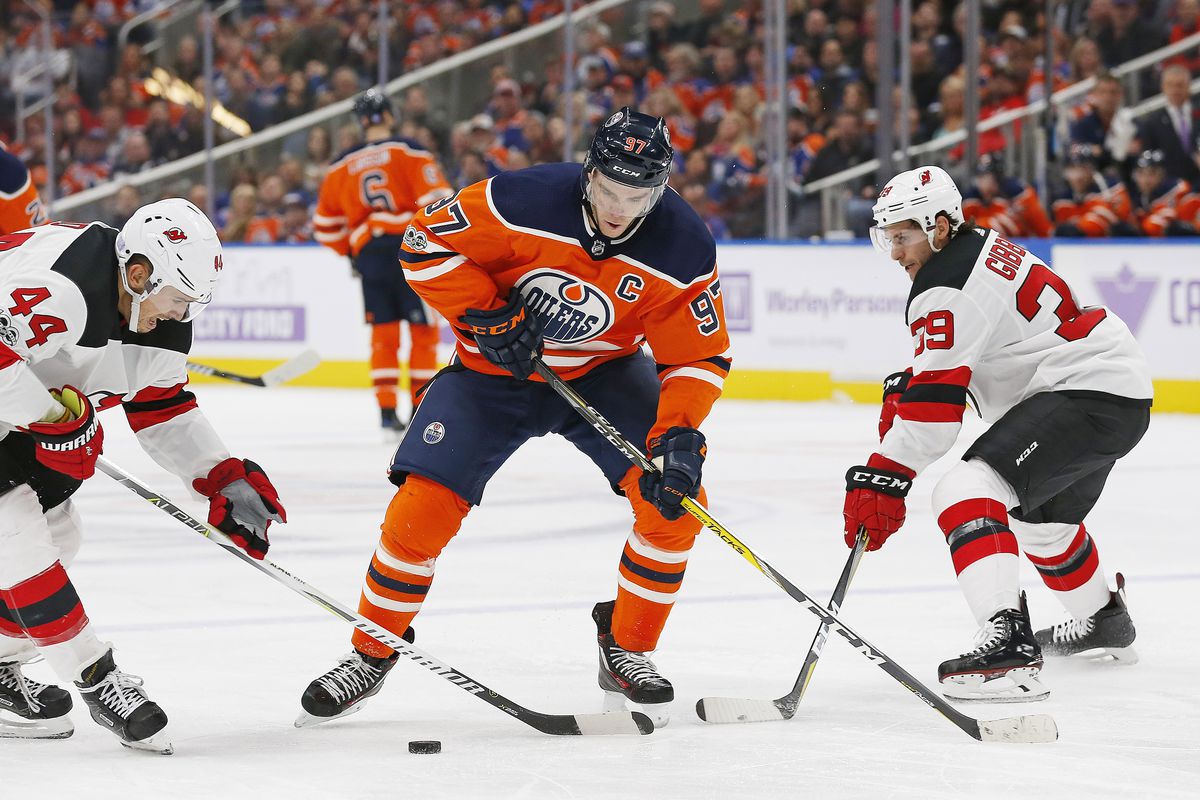 The Edmonton Oilers came into their four game home-stand knowing they needed to collect six of eight points in order to keep their playoff hopes alive. Tonight, the Oilers can accomplish that mission if they can beat the New Jersey Devils. It won’t be easy, New Jersey gave the Flames a run last night for a while, but these are two points the Oilers badly need.

This will be the second and final meeting between the sides this season, who haven’t seen each other since Opening Day in Sweden. Times have changed for both organizations, as the Devils have fallen off a cliff and won’t be in the playoffs this season. Edmonton, meanwhile, is barely still alive in the playoff chase.

Mikko Koskinen looks to pick up his sixth win in a row as he gets the nod for the Oilers, while Cory Schneider goes for the Devils.

Edmonton: I firmly believe that a quick start is key for the Oilers. This Devils team has lost seven in a row, is without their best player, and played last night. Attack them early and be physical with them. Let the Devils know they are going to be in for a rough night and get an early lead. A fragile team like this very easily could pack it in when adversity hits.

New Jersey: When the Rangers started to cycle the puck on Monday night, they went long stretches with controlling the play against Edmonton. That’ll be the key tonight for the Devils. Quick puck movement against this weak Edmonton defense should open up shooting lanes and create scoring chances.

Edmonton: Milan Lucic returns to the lineup tonight and faces a team that he’s actually scored against this season. Lucic netted the first goal of Edmonton’s season way back in October, and played one of his best games of the campaign against the Devils. After missing the last two contests, I suspect he comes out looking to make some sort of impact in this one.

New Jersey: The Devils selected Michael McLeod 12th overall in the 2016 NHL draft, hoping he would provide them with speed and skill down the middle. McLeod, after developing in both the OHL and AHL, is now trying to make his mark. He’ll center the Devils’ third line tonight and will be worth keeping an eye on. He’s the older brother of Edmonton prospect Ryan McLeod.

Lucic returns after missing two games with a hip problem, while Oscar Klefbom will play after leaving Monday’s game following a shot to the fun zone. Jujhar Khaira, who missed practice yesterday, will be in the lineup. Ditto Matt Benning, who left Monday’s game after taking a hit from behind but did return to action.

Brad Malone, Alex Petrovic and Kevin Gravel will be the scratches.

Taylor Hall will not be playing his third game in Edmonton as a visitor tonight. Hall has been out of the lineup since December and has only played in 33 games. His absence has been a huge issue for a team that has disappointed quite a bit. Marcus Johansson was dealt to Boston at the deadline, while Keith Kinkaid was sent to Columbus hours prior to that.

The Oilers, with a victory tonight, will pull within four points of the second and final wild card spot. Currently, Arizona sits in the final playoff position after they jumped Minnesota via a 3-1 victory in St. Louis last night. The Oilers will head to the desert after this to battle those Coyotes on Saturday. These two points are vital.

New Jersey’s victory on October 6th snapped a four-game winning streak for the Oilers in the series. Three of the last five meetings went to overtime, with the Oilers winning all three of them in the extra frame. The Oilers’ lone regulation win in the streak came last season at Rogers Place, with Edmonton winning 6-3 on November 3rd, 2017.

The Devils gave up nine goals last night in Calgary, then traveled to Edmonton and will play a desperate team tonight. I suspect, after being thoroughly embarrassed, that the Devils bring a much better effort to the table here.

That said, the Oilers know their season is in doubt and that they must win this game. They get it done, wearing out the Devils and breaking out in the third period. Final score: 5-2 Edmonton.