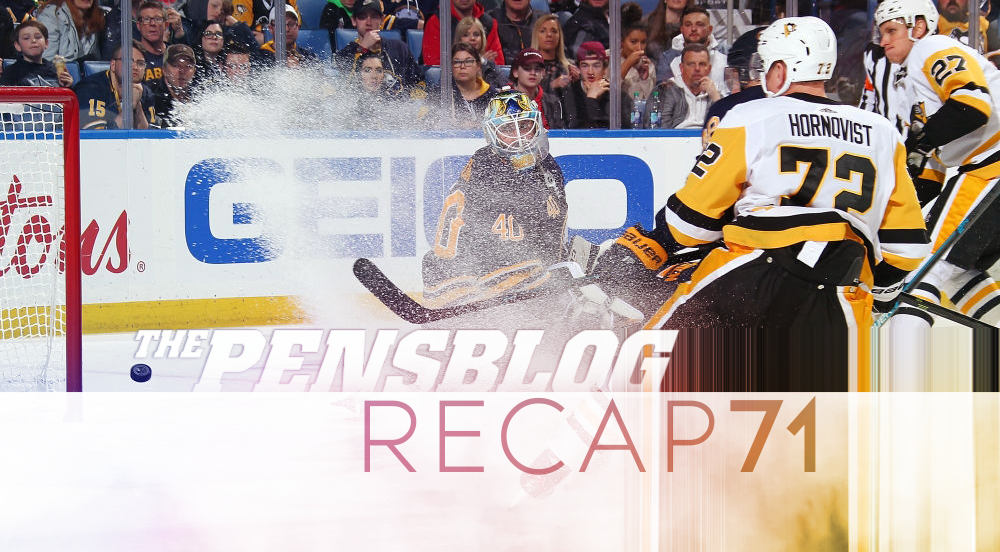 Despite the Sabres being a woefully bad ice hockey team, games against them still count.  They may count for less than, say, a comeback win against the Caps, but a win is still a win.

That’s what the Penguins needed last night and a win is what they got.

It had all the makings of being a trap game, too, given how hot the Penguins were coming in and, again, how woefully bad the Sabres as a team and organization are (2-7-1 in their last 10).

Instead, it was everything but that.  Buffalo was lifeless and the Pens brutalized their corpse in ways that would probably be illegal in 169 countries.  Summed up in a GIF…

At 5v4, the Pens powerplay went 3 for 4 on the night, while the penalty kill shut down both penalties the Penguins took.

And with the Caps and Isles both winning last night and the Jackets and Canes play one another tonight, this was just what the doctor ordered.

HCMS made no changes to the lineup that came back to beat the Caps on Tuesday night, save for Matt Murray’s Backup getting the nod in goal to give Murr a day off before the long trudge to the postseason starts to set in, while Gene took no nights off and went and got started on his next 1000 points.

Whole lot of nothing and dicking around and more nothing as both teams combined for exactly 4 shots on goal in the first 5+ minutes.  Bjugstad with the best look, nearly scoring on the Pens first shot of the game.

But the boring as shit opening 20 minutes had the potential to be livened up a bit with 9:13 to play after Pettersson cross-checked Okposo from behind to put the Sabres on the first PP of the night, except it didn’t because the powerplay was about as useless as the entire city of Buffalo.

What has Buffalo actually given us?  Buffalo sauce/wings, sure, but people were eating chicken wings before Buffalo was established.  Some lady just decided to melt butter, mix it with hot sauce and stick a buffalo tag on it.

That’d be like naming every hurricane after the city of Chicago because windy conditions happen there too or affixing “Ottawa” in front of every bad, incompetent team.

The Ottawa Sabres has a nice ring to it, right?

Anyway, the Pens had a chance late from the stick of Jared McCann, but Hutton found a way to reel it in.

This pass from Schultz is something else. So silky pic.twitter.com/btgoKfYbQ1

Early on, Buffalo damn near opened the scoring when the Pens lost track of Conor Sheary in front of DeSmith, but Matt Murray’s backup made an unconscious save to deny the little guy before Gudbranson put him on his wallet.

Right after, Casey Nelson went off for interfering with Malkin to put the Pens on their first PP of the night.

And they did not let the opportunity pass them by.  Late on in the penalty, Phil! does a remarkable job down low to keep the play alive to get it over to Guentzel in the opposite corner before damn near waiting Hutton out and burying it when Crosby worked it back down to him.

Watch Dom here, though, as Phil! doesn’t score after waiting out a sprawling Hutton.

Instead of hanging out in the blue paint hoping the puck squirts out to him, he reads the play and sees that it’s never going to come.  He gets on his horse, hounds the puck and keeps the Sabres from getting a clean clear, throwing it back down low to Money Bag in the end.

That’s where the magic happens.  Bake and Crosby go from low to high, get the Sabres moving, and set up MP28 to feed Phil!.  As soon as Phil! picks up the puck, the Sabres are toast.

Phil! sells shot, freezing all 3 Sabres on his side of the ice.  They allow a 2v1 to be created down low with Crosby and Guentzel, which is a recipe for disaster.

Crosby and Guentzel combine, the Sabres can’t adapt, and Phil! buries his 3rd in his last 5.

Sid’s ability to just hold on to the puck for that extra split second to wait for the passing lane to open is unmatched by anyone to ever play the game.  This is scientifically accurate and has been peer reviewed.  The world is talking about it.

Floodgates are opening for Kessel now. But oh boy that Crosby pass pic.twitter.com/RVF6Trb8Ey

when you finish but sid keeps on passing pic.twitter.com/O2cJc3ZWVz

Two minutes later, the Pens would have to go and kill a Blueger interference penalty before scoring again.

After some disjointed shit in the neutral zone, Buffalo was forced to chip it in deep and go for a change.

Controlled breakout city for the Pens.  Too easy for Blueger to take Trotman’s pass, exit the zone, and hit Gene on the left wing bombing into the o-zone.

He circled the wagons while all 5 Sabres players watched him do so and feed Dumo all alone at the top of the faceoff circles.

Pens may not score an easier goal this year.  Unreal effort from the Sabres.

Because about a minute after Dumo’s goal, they’d find themselves shorthanded again after Scandella hooked up Cullen.

After winning a battle along the right wing wall, everyone rushed to get in position as it kicked out to Kessel at the point.  He worked his way back to his spot on the half wall before dropping it back to Jultz to keep things moving to where 87 was lurking.

The Sabres came out swinging a bit in the third, controlling the 5v5 shot attempts for about the first 10 minutes or so.

It wouldn’t last longer than that.

Because from the midway point of the period, Buffalo ended up on the business end of the Pens closing the game out and tough titties for them that it included Bjugstad burying a 4th by Hutton.

Big slapper dump in from the neutral zone that Simon won the race to, sealed the wall off, and got a fortunate bounce over the pinching d-man’s stick right as Bjugstad hopped over the boards.

He looked at Hornqvist asking for permission to snipe and you know the big Swede was all about obliging him.  Goal doesn’t happen though without the play Simon made in the corner.  Oh boy.

To add insult to injury, with Dahlin in the box for slashing Phil! late on, the Pens added another off the stick of Zach Trotman.  Changed directions in front of Hutton because Jake Guentzel is insane is at getting his stick on every single shot that comes his way.

These Sabres salty, they sodium, they jelly, petroleum
Always talkin’ in the background, don’t never come to the podium
Chef Jakey G, I’m cookin’ up, I see you goals in the net again

Pens get their last back-to-back of the year out of the way this weekend when the Blues and Flyers come to town before hitting the road for a 4 game road trip to Carolina, Nashville, Dallas, and MSG.  They could basically end the Flyers season on Sunday night, too.  Do it.  Go Pens