Your Morning Dump... Where I ask, 'is it ok to feel good about this team again?' 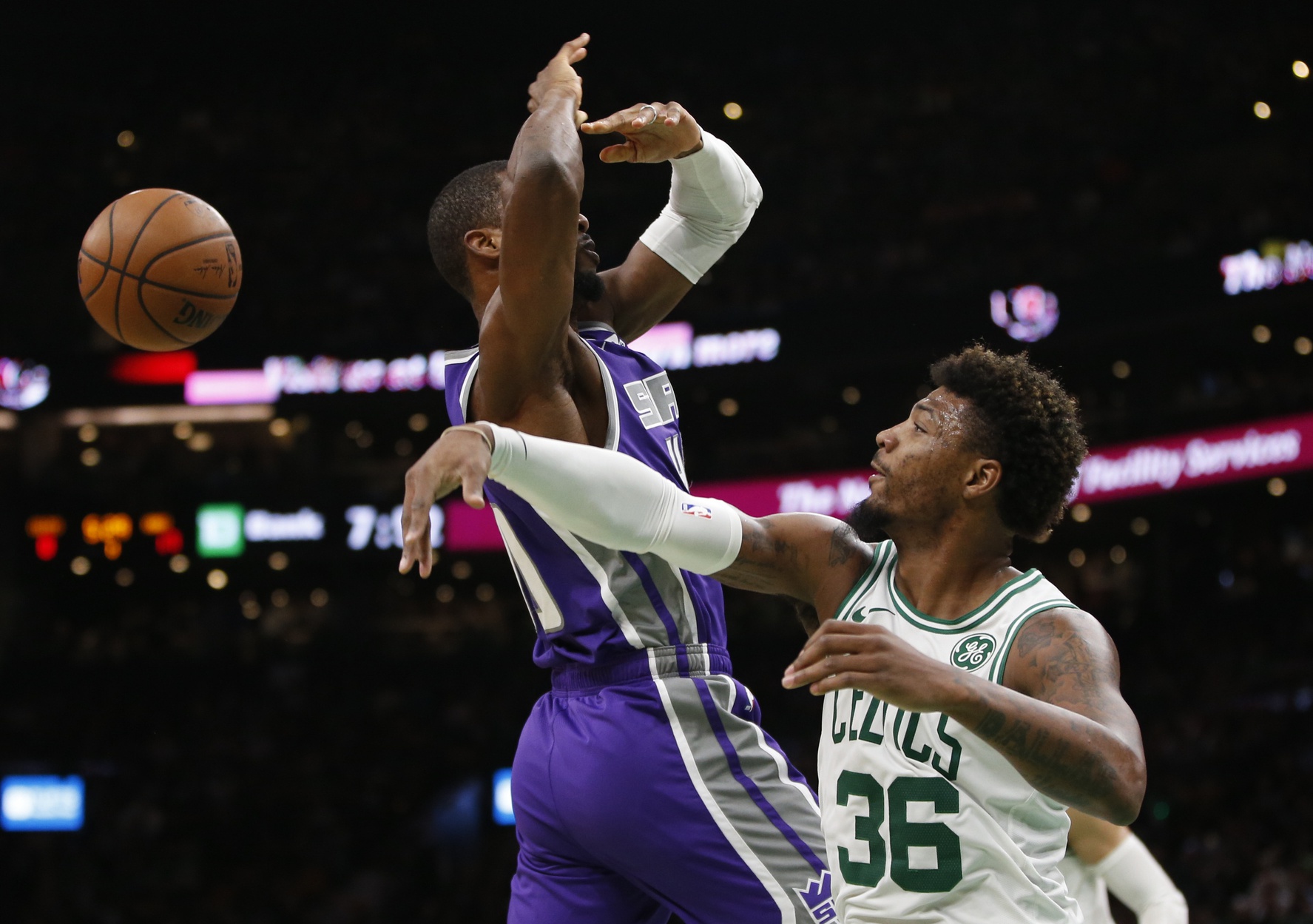 Your Morning Dump... Where I ask, 'is it ok to feel good about this team again?'

As bewildering as the Celtics can be – at their worst their trailed by 17 points in the second quarter – they also need nights like this to sort out their many issues.

The Celtics, this time at home, beat a fleet Sacramento team for the second time in eight days with Thursday night’s 126-120 win.

Ultimately it was the kind of grinding win players such as Irving have been looking for from this uneven, oft-fragile team.

But the bitter taste from the way they ended their 3-1 road trip, by allowing a season-high 140 points to the Clippers, didn’t last past halftime Thursday night.

“The hardest game is the first game coming back from a road trip,” Irving said. “It’s always going to be a dogfight no matter who you’re playing against, but obviously when you have a team fighting for playoff position it’s going to be that type of intensity and you’ve got to be ready for it. So, they were up 17 but we used our experience and a lot of the things we’re great at, just attitude, toughness, things we can control, effort, and got back in the game.”

Shortly before the All-Star break, I reminded readers that–ugly games against the Los Angeles teams notwithstanding–the Celtics had been playing solid ’60 win’ basketball since, roughly, Kyrie’s profane Thanksgiving comment–a longer period than most were acknowledging at the time.

The Celtics rewarded my optimism by coming out of the break and dropping five of six, and looked like a collection of bickering and petty D-list celebrities on a reality show.

Then came The Plane Ride, and some solid games out west, long after most of you guys’ bed times (although hat’s off to Red’s Army’s OG Mike Dynon, who covered that stinkburger of a game against the Clips, even though it ended after 1AM Eastern.)

After losing one ‘trap’ game, The Last Game Of A Long Road Trip (as an aside: It seems like, with creativity, you can turn any regular season game scenario into a ‘trap’ game), the Celtics came home to another one: The First Game Back After A Long Road Trip.

Although they were playing a team fighting with the Clippers for the last playoff spot out west, and needing every win they can manage, the Celtics displayed the greater mental toughness, grinding out a very imperfect win.

And now I’m wondering if I can relax a little–as a fan, of course–and trust this team to take care of business down the stretch and into the playoffs.

Page 2: Where it was a SEGABABA for the Time Lord

Williams was in Chicago earlier on Thursday after playing an overtime game Wednesday night with the Maine Red Claws (he sent the game into overtime with a tip slam). He didn’t get in to Boston until 1 p.m., just a few hours before he needed to be at the arena.

Still, he was excited to re-join the team, and he finished with two points, two steals and a rebound. The Celtics were +5 when he was on the court.

That story only adds to the Time Lord legend. Everyone else on the team was playing with two days’ rest.

Robert Williams got some extended run last night when Aron Baynes got into foul trouble, and acquitted himself well during his time on the court.

After the game, Williams gave credit to Al Horford:

“It was a good learning experience,” Williams said. “We were out there, Al was talking to me the whole time, talking me through the defense, telling me to stay down on pump fakes, be solid, be long, take rebounds. So I feel like it was a great experience.”

Ok, that stuff sounds fairly trivial, but that’s because what’s involved in ‘talking through the defense’ doesn’t really translate into good quotes after the game. A blown assignment is often a matter of fractions of a second and in that milieu, good communication on defense can be one or two words that make absolutely no sense out of context.

And, while Williams is nowhere near consideration for rookie honors of any stripe, there’s incredible value in playing alongside a guy like Horford who–whatever his faults may be–gives a master class in how to defend bigs during just about every game he plays.

Finally: Stevens, Tatum and Irving have thoughts about Westbrook’s interaction with a Jazz fan

“People always expect us to turn the shoulder,” Jayson Tatum said at practice today. “And we get paid all this money, we should be able to let them talk to us any kind of way, and that’s just not true. For the most part, we do a good job of letting go and running out the other way but what that person said was tough. It was out of line and very disrespectful to who he was as a person. We’ve all been out there. You’ve got to stand up for yourself.”

The one person I would’ve liked to see comments from after the Westbrook incident was Marcus Smart. Smart, of course, got into a physical altercation with a fan while he was playing for Oklahoma State.

There’s never a point where it’s acceptable for a player to get into it with a fan, however, there are certainly occasions where it’s understandable when that happens.

“I do know that 99 percent of the interactions with fans are either very lighthearted or don’t cross the line. But there are some that have, and I feel for the guys, because they’re right there,” Brad Stevens said. “We talk about how close the fans are to the benches and it’s even moreso in the NBA. I don’t go down to the end of the bench very often, but oftentimes there’s people literally sitting on the end of your bench. There certainly is in the front.”

This is something I’ve noticed with the NBA. I’m old enough (God, here I go starting sentences off like this), anyway, I’m old enough to remember when the Lakers made headlines by selling court-side seats. Since then the practice has not only spread to every team in the league, but the number of courtside seats has steadily increased as well. One of these days we’re going to see the entire bench crammed into one of the access tunnels to maximize court-side seat frontage.

Kyrie, predictably, gave a lengthy answer when he was asked about the Westbrook altercation, but the meat of it was in a nice little soundbite:

If we were out, out and about with our families, ain’t nobody saying no s— like that to us.

This is true. And this is pretty much where I’m at when it comes to heckling.

When you yell basketball-related nonsense at players, it’s understood that they’re not going to respond to you. That’s part of the whole ‘attending a performance’ aspect of sporting events. But you, the fan, have to live up to your end of the bargain. Being a fan doesn’t give you the license to say whatever you want. If you cross lines, the fact that you paid for your tickets is of no consequence.

If you’re saying stuff to a player that you would not say to someone in a different environment, one where there’s not that invisible player/fan demarcation, then, friend, you’re already on thin ice.