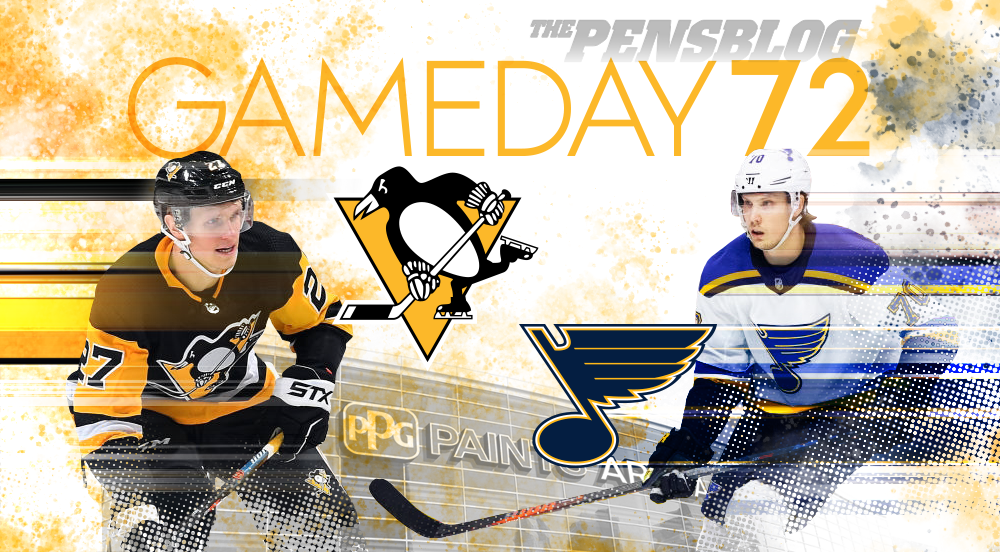 Following the dismantling of the Buffalo Sabres on Thursday night, the Penguins kick off their final back-to-back scenario of the season with a matinee matchup at the Paint Can against the resurgent Blues.

With both teams sitting in that precarious playoff bubble, it’s all to play for here.

The Penguins come into this game on a 3 game win streak, having gone 7-1-2 in their last 10, outscoring their opposition 37-22 over that stretch dating back to February 23rd.  Thirty seven goals for at all strengths is 4th most over that period and their 16 standings points are the joint-most over that 10-game period (tied with Washington and Arizona, both of which are 8-2-0 in their last 10).

Matt Murray has been nothing short of brilliant.  His backup is coming off of a shutout, too.  That 22 goals against is 5th fewest over that period.

Crosby (8G-11A-19P) and Guentzel (8G-5A-13P) have led the charge offensively for the Pens over the last 10 just as they have been doing all season.  Phil! is scoring again, and Letang and Rust aren’t far away from returning to the fold either.

Wouldn’t expect any changes to the lineup that tormented the Sabres.  DeSmith playing well might earn him his second straight start before Murr gets the stretch run.

After a tumultuous start to the season, which saw the Blues in the basement of the league keeping the Senators and Kings company and the eventual firing of Mike Yeo, Craig Berube has stepped in and righted the ship and put them back into a playoff spot (Wild Card 1 in the West with 79 points from 70 games and a 5 point cushion over Minnesota), largely due to the emergence of Jordan Binnington.

He is, by some accounts, not the old lead singer of Linkin Park.  Curious that the Linkin Park guy would die and about a year later, this kid comes out of nowhere.  Most curious.

The Penguins will get one of these two.  With Allen playing better than Binnington of late, easy money is on Allen getting the start in Pittsburgh and Binnington getting the nod Sunday in Buffalo.

Scoring has been a problem for them all season, too.  Of the 16 teams in playoff positions, only Arizona (193) and Dallas (178) have scored fewer goals than the Blues 199 (as of the morning of 3/15/19).  This is in spite of the fact that only 5 teams have generated more raw scoring chances at 5v5 over the last 10 games than the Blues.  However, their 10.27 high danger scoring chances per hour of 5v5 ice time is 22nd most over the last 10, leading one to believe that they are capable of generating chances, but their lack of scoring is stemming from a lack of penetration.

What’s more, they’ll have to find a way to score goals without their best goalscorer in Vlad Tarasenko, who’s out for another week or so at a minimum.  Look for STL to rely more on their leading scorer Ryan O’Reilly (26G-41A-67P in 70 games) more than they already have this season.