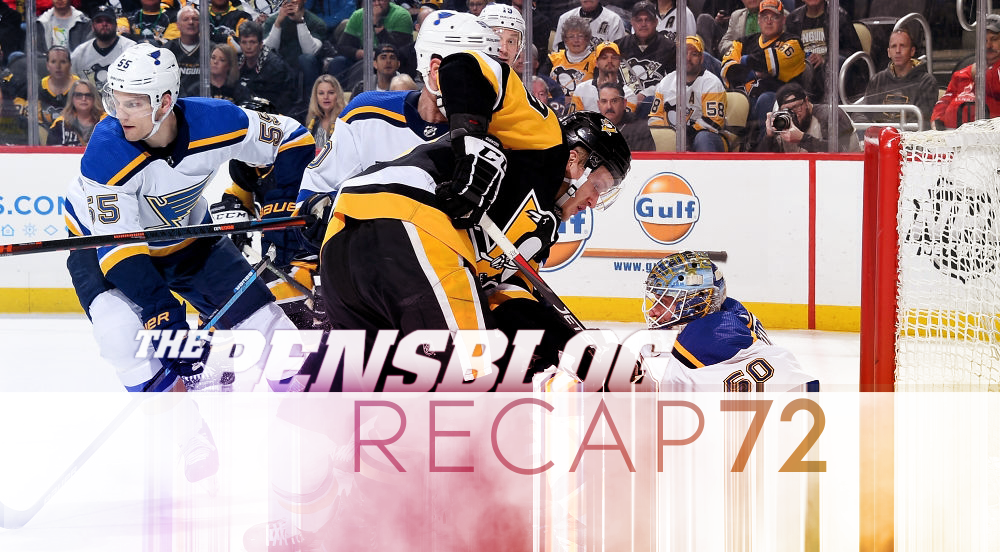 Today had all the makings of a classic dud. A 1:00 face-off. Western conference team. A goalie you’ve never heard of. Rivalry game tomorrow.

No one would’ve blamed you if you skipped this one, especially being St. Paddy’s Day weekend.

Sum of all fears – Pens give up two in the first, two quick to start the second and looking about as interested as a bartender when you ask them for something other than BEER this weekend.

Actually good Dom Simon gave us a glimmer of hope, but it just wasn’t happening.

Sullivan this morning confirmed that Letang and Rust would not return today, but they are close. Tomorrow not ruled out.

Murray in the cage.

Lined up and ready for mid-day hockey. pic.twitter.com/MllJ4wH2zg

It was time to properly honor Geno for his 1,000th point. The whole family was there and the video tribute was unreal.

Wilson Pickett, get all the way real. Solid music choice.

Pens also gave Geno all kinds of cool memorabilia that was, you guessed it, made from the Mellon Arena’s roof.

The year is 3019. Robots and aliens are warring to enslave the human race. Wendell August Forge is still making things out of the Civic Arena roof

With all the pomp and circumstance behind us, it was time to play hockey and boy it was not a great start, let me tell ya. A few turnovers by the Pengs would lead to oddman rushes for St. Louis.

They would finally get burned when a half-pinch by Trotman turned into getting beaten by Paryako. This would establish possession in the offensive zone for the Blues. He would work it to Schwartz, who found Oskar Sundqvist sneaking in late.

One of McCann or Sid has to decide to take Sundqvist there. Great shot.

Following the goal, the Penguins had two separate opportunities on the power play to tie this one up.

The first one saw the Pens throw four shots at the net and get a bunch of looks, but nothing doing. The second….not so much.

The real story of the first power play opportunity was Robert Bortuzzo absolutely CRUSHING Evgeni Malkin in the ribs with a cross check.

Listen, I know you just called St. Louis for a penalty, but this is blatant and an intent to injure. I’m all for jostling for position and battling in front of the net, but I’ll say it again: I called Chief, he said this ain’t it.

Between power plays for the Pens, Matt Murray made an absolutely unrealistic save. With the Blues pressing and a shot from the point finding it’s way through, bouncing off O’Reilly, Muzz just gets a toe on it. Great awareness and puck tracking by the two-time Cup winner.

Following St. Louis killing off the minor to Bozak, they went right back to work. A bit of a sloppy entry by O’Reilly (who totally wasn’t traded there in a complete fleecing), leads to David Perron dumping the puck in and winning a puck battle against Guentzel. He recovers after the attempted hit, finds O’Reilly and Dunn finds the soft spot and he beats Murray through a Gudbranson screen.

There isn’t much anyone can do here. Gudbranson takes Schenn in front, as he should, but doesn’t account for where Murray is, rendering him unable to see the shot. Pettersson and Guentzel both went for a hit on Perron, freeing up the middle of ice for Dunn and while Sid comes damn close to closing off Dunn, the play has already been decided. Rough all around.

That would be about all she wrote for the first period.

The Penguins got caved the hell in at 5v5, holding 41.3% of the shot share and only mustering one HDCF. Sleepy, awful period.

The Penguins actually came out of the gate in the second period with some jump. A play two minutes in, Geno put pressure on Dunn trying to leave the defensive zone and stripped him, worked the puck to Phil! but Binnington read the play and made the save. This was a recurring theme of the day.

The Blues would score essentially right off the ensuing faceoff. A clean win by Sid, but Thomas springs off the jump and steals the puck, working it all the way down to the Pens zone and behind the net. He throws a hope pass in front that somehow finds Maroon’s stick.

When your team has been shooting at 4.08% at 5v5, you just get those breaks…I think, someone who is good at spreadsheets please help, my hockey team is dying.

Just 1:10 later, St. Louis would make it four-nil. Maroon would turn Pettersson inside out, cut behind the net and in the chaos, everyone focused their attention on Maroon, leaving Jay Bouwmeester (still in the league, apparently) wide open in the slot. He made no mistake and fired it past Murr low. That goal would end Murray’s night and in came DeSmith to mop up.

The pulling of Murray would actually wake the Pens up a bit as they began to press. Crosby would just miss on a breakaway and on the following shift, Dom Simon would break Binnington’s shutout bid.

A broken play in front of the net as an errant Hornqvist pass to Bjugstad would end up getting lost. It hits seemingly everything before finding Simon’s stick. He fires it low on a turnaround shot and beats Binnington low.

The thing about Simon is, he’s a perfectly serviceable middle-six forward. Having him on the second line as a bandaid is fine, but once this team is healthy and he plays on the third and fourth lines consistently, he will benefit.

The Penguins would get another power play opportunity following Simon’s tally, but like it had been all day, they generated chances but couldn’t solve Binnington.

Pens only slightly improved in the 5v5 shot share in the second, up to 46% and added two HDCF.

That about sums up the day. The Pens were getting chances and they just wouldn’t fall. You get one of your best scorers on a breakaway 1:15 into the period and he juuuuuust misses the net. Tough break.

Later in the period, Phil would take a seat for high-sticking David Perron, Vince Dunn would get his second of the night on the power play.

No two ways about it, DeSmith needs to have that. The screen moves in time for him to see it.