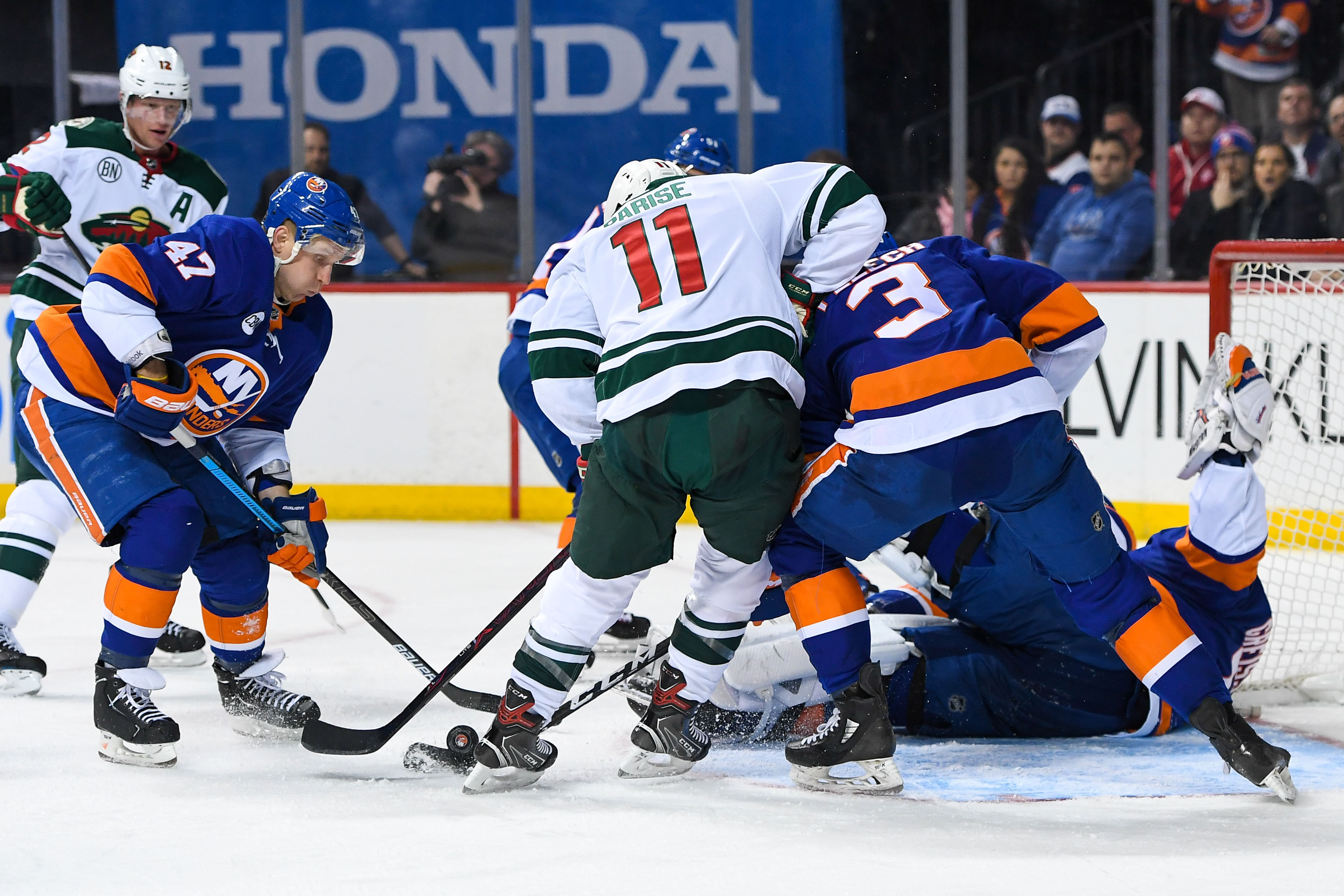 Prior to Saturday’s game against the New York Rangers, the Wild made a lot of pledges to exhibit some urgency and being ready to play.  The Wild managed to roll to a 5-2 win, but that’s against a non-playoff team.  The Wild now face a much different animal in the hard working defensive juggernaut that is the New York Islanders.  The Islanders are coming off a frustrating loss at the hands of the Detroit Red Wings, so they might be a bit ornery this evening.

The Wild cannot afford to let up, while an overtime loss by Arizona tightens the race to a 2-point deficit, Minnesota must do all that they can to come away with 2 points against the Islanders.  Can the Wild actually win a back-to-back on home ice?

In the past we’ve questioned the hustle and fire of this team, but Minnesota exhibited plenty of desperation in today’s game against the New York Islanders.  The Wild were hustling and trying to win all of the little races for the puck and paying the physical price to make plays.  While I understand the current situation in the standings it also makes it that much more painful to consider why that same effort wasn’t there in games where the team was still in control of its destiny.

I am enjoying watching the continued development of the young Wild players like Luke Kunin, Jordan Greenway and Ryan Donato.  These players bring energy, skill and a hunger to their game that helps them stand out from the Wild’s core of veteran players.  Donato’s release and his willingness to pull the trigger when other options are unavailable is so refreshing.  Yet there still are some growing pains as Greenway was set up by Donato for a wide open chance in the slot but he couldn’t beat Thomas Greiss.  Still, it was their hustle that helped draw a number of penalties on the Islanders who were having a hard time coping with Minnesota’s speed and hustle.  The Wild would be wise to continue to expand on their opportunities; especially on the power play where I think it would benefit from their penchant for pulling the trigger.

Minnesota had dominant 2nd period, outshooting the Islanders 16-3, but despite all of the pressure in and around the Islanders both clubs scored a goal apiece.  It was rather deflating to have as many great scoring chances but not be able to keep the game tied or take the lead.  A lot will be made of the goaltender interference call that waived off Donato’s early tally.  It didn’t look to me like contact caused Greiss to turn sideways, but the officials saw the players in the crease and made the call.  The Wild were crashing the net which was good to see and they ultimately scored as Zach Parise lit the lamp on a pretty little between the legs shot.  One player who stood out to me was Jared Spurgeon who was seemingly everywhere.  Bailing out Alex Stalock early in the game and activating from the point to put additional offensive pressure on New York.  Unfortunately, the Wild give the Islanders a power play and Minnesota gives up a goal and find themselves down by one going into the 3rd period.  So as great as that sense of urgency and hustle was, it still wasn’t good enough.

The 3rd period was again one of desperation by the Wild and one of calculated effort by the Islanders.  The Wild were all in and perhaps a bit reckless as they had 5 skaters below the faceoff dots in search of the equalizer and they’d nearly get burned as Matt Barzal raced down the ice in a 2-on-0.  But an amazing effort by Spurgeon to hustle back would limit Barzal’s options and Stalock was able to make the save.  Minnesota would draw a penalty and after an anxious first minute of the man advantage but a heavy shot by Donato would produce a rebound that Staal sent back on goal that Greiss kicked out to Spurgeon who buried it.  2-2 game.  The Islanders would try to answer back with some pressure of their own by Minnesota was able to take away the shooting lanes.

The final few minutes were tense as neither club was cautious of making a big mistake that would yield a prime scoring opportunity.  Minnesota was continuing to look to create turnovers through the neutral zone and try to take advantage of the Islanders in transition.  Donato continued to be pesky down the stretch as he nearly cashed in on a wrap around but the game would go to overtime.

Unfortunately the personnel choices in overtime were pretty questionable.  Suter is horrible in overtime, his lack of speed makes him a major liability and whenever he tries to pinch offensively in overtime it inevitably leads to an odd-man rush the other way.  And as the Wild couldn’t gain possession, all the Islanders did was wait for Minnesota to over commit and they’d go on the attack and Barzal would set up Brock Nelson who was open in the slot for an easy goal.  3-2 Islanders win.  The point is nice, but it feels like this team feels compelled to use Suter in every major situation regardless of how he might (gasp) be a liability.  This isn’t a time to worry about wounding someone’s pride, every point matters and the Wild just threw another point away in my opinion.

~ Crease And Assist: A Legally Compliant Minnesota Hockey Blog would like to congratulate the Minnesota Whitecaps on their 2-1 overtime victory over the Buffalo Beauts to become the 2019 Isobel Cup Champions of the NWHL!  Also, congratulations to Lee Stecklein on scoring the game winning goal and being named the Championship game’s MVP.  #StickTap

The Rampage would break the stalemate as former Denver University star Joey LaLeggia wired a shot from the point that Andrew Hammond didn’t see.  Iowa would answer back a few minutes later as the Wild’s power play operated with tremendous precision as Sam Anas set up Gerald Mayhew that Ville Husso had no chance on.  The Rampage would answer back as Trevor Smith scored on the power play to give San Antonio a 2-1 advantage going into the 1st intermission.  Iowa would waste little time to respond to the challenge as the power play continued to work with lethal efficiency as Anas sniped a shot top shelf to tie the game 2-2.  Another Wild power play and another goal as Anas managed to poke a puck in behind Husso to give Iowa a 3-2 lead.  Iowa would continue to keep rolling on the power play as Kyle Rau scored an easy tap in goal off of Brennan Menell‘s set up.  4-2 Wild, and the Rampage had seen enough and they subbed Jared Coreau in for Husso but it wouldn’t matter.  Mitch Reinke would cut Iowa’s lead to one late in the 2nd but that was as close as it got.  Iowa would lock things down defensively and as the Rampage took more risks looking for the equalizer the Wild would counter attack and Mason Shaw would score to make it 5-3.  Mayhew added another power play goal to seal a 6-3 win.  Hammond had 19 saves in the victory and Menell had 5 assists, as he broke a single game record for points by a defenseman.  Anas had two goals and two helpers while Mayhew had two goals of his own.  Cal O’Reilly had 3 apples to his credit.

C – Damien Giroux (Saginaw, OHL) ~ the Spirit’s captain earned 2nd star honors has he buried Saginaw’s only goal in their 2-1 overtime loss to Sault Ste. Marie on Thursday.  The Hanmer, Ontario-native had a helper on 2 shots in Saginaw’s 5-2 loss to London on Saturday.  Giroux has 30 goals, 51 points, 22 PIM’s and is a +30 in 66 games.

C – Alexander Khovanov (Moncton, QMJHL) ~ the skilled Russian had a goal and an assist on 3 shots in Moncton’s 3-2 win over Charlottetown on Friday.  He then followed up with another assist on Saturday in Moncton’s 6-4 win over Saint John.  Khovanov has 25 goals, 74 points, 94 PIM’s and is +7 in 64 games.

D – Braydyn Chizen (Brandon, WHL) ~ the big defenseman doesn’t score a lot but he scored a goal on 2 shots in Brandon’s 5-4 shootout win over arch-rival Regina on Saturday which earned him 2nd star honors.  Chizen has 3 goals, 11 points, 79 PIM’s and is -5 in 64 games.