Colorado Opportunistic in 3-1 Win Over the Wild 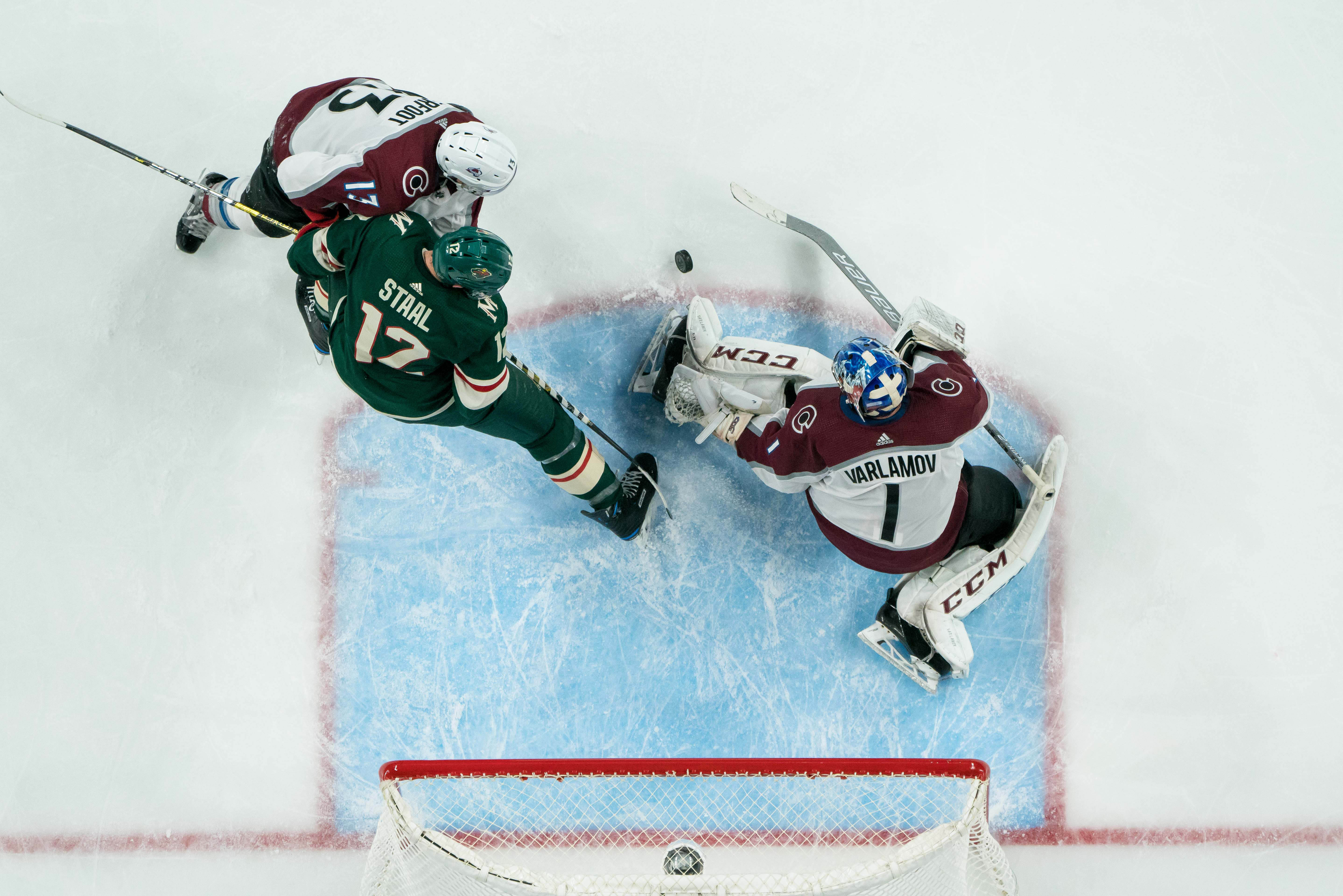 Colorado Opportunistic in 3-1 Win Over the Wild

March Madness is often fraught with people pouring over brackets and participating with a group of friends or various office pools.  I am sure we all want to debate whether its likely the #12 seeded New Mexico State will upset #5 seeded Auburn right?  We all know the Aggies are going to win right?!  I used to participate in such fruitless predictions; just to watch my more knowledgeable basketball following friends go crazy when an early round upset undermines their bracket and I relish at their outrage.  Afterall one-and-done tournaments are high stakes and the toughest part is just getting to the tournament in the first place.  The Minnesota Wild are certainly learning that as squandered points and late-game collapses is making the walls feel a bit closer and the pressure a lot greater as we wind down the NHL season.

The Colorado Avalanche come to town with the mindset to leap frog the Wild and it should have the makings of a playoff-like atmosphere as both clubs will putting it all on the line.  As my old coach used to say, it will be like two people fighting it out in a phone booth with one knife between them.  It will probably come down to which team wants it more, will the Wild come out on top?

1st Period Thoughts:  Often times the biggest opponent one faces, is the mental challenge of being ready to play.  The pace was predictably fast and intense to start as both clubs were hoping to get ahead early.  Neither the Wild or the Avalanche appeared to have a major advantage.  Even a Colorado power play couldn’t really tilt the scares in favor of one team of the other as Minnesota’s penalty kill looked solid.  But one shift would change all of that.  Eric Staal would gather up a puck behind the Wild goal and after a few moves he seemed to lose focus and he’d nearly cough up the puck to J.T. Compher which had Minnesota chasing for the loose puck and Brad Hunt would go face first into the boards.  Hunt looked like he may have lost all or part of the tooth and he’d head back to the Wild locker room for repairs.  This put Minnesota’s defensive pairs into chaos and disaster soon followed as a rancid shift by the Victor Rask, Pontus Aberg-line and the Avalanche would swarm and it was Tyson Barrie scoring on an out of position Devan Dubnyk.  1-0 Colorado to a collective groan from the sellout crowd.  The Wild would try to answer back and the power play would give Minnesota an excellent opportunity.  Minnesota’s puck movement wasn’t slow, but it wasn’t fast either and Colorado’s penalty kill was able to get sticks and bodies into shooting lanes.  Philip Grubauer was able to see the puck and make the first save and despite the fact the Wild sent 6 shots on goal, they were all from the perimeter and fairly simple saves and Minnesota came up empty on the man advantage.  At times the Wild were too cute with the puck as Kevin Fiala skated into the offensive zone with a 3-on-2 developing and he’d cough up the puck to Patrik Nemeth.  Minnesota would nearly cash in late in the period as Ryan Suter sent a wrist shot from the point that reached Grubauer and Zach Parise pounced on the rebound where it was blocked aside.  The Avalanche would counter attack and it was Derick Brassard who tried to thread a cross-ice pass that was deflected away by a great poke check by Jared Spurgeon.  Minnesota would escape the final seconds unscathed but they had to be frustrated how one bad shift yielded a goal in what was a reasonable 1st period for the Wild.

2nd Period Thoughts:  Minnesota would draw a penalty early in the 2nd period as Jonas Brodin was held up by Mikko Rantanen.  Suter would again send a wrist shot on goal that Grubauer knocked down but were unable to get much of anything off the rebound and the puck would be covered with a whistle.  Minnesota would try again and Suter’s point shot was redirected by Parise and by Grubauer.  1-1 game on the power play tally.  The goal seemed to ignite the Wild’s physical game as J.T. Brown and Marcus Foligno finished their checks with authority.  The physical play would get the other lines’ legs moving and they’d pin Colorado in its own end and Grubauer made a big stop on Staal.  The Avalanche would try to counter a wrist shot from Barrie was stopped by Dubnyk and Brassard tried to poke at the puck that drew the ire of Eric Fehr.  After a few minutes of chasing he puck around their own end, the Wild would regroup and it was Spurgeon setting up Jordan Greenway for an in close chance that was fought off by Grubauer.  A few minutes later, perhaps in a perfect personification of his time with the Wild Victor Rask would skate down the ice in an easy 2-on-1 but instead of creating a scoring chance he fumbles the puck and Minnesota doesn’t register a quality shot on goal.  The Avalanche counter attack and after a bit of a flurry near the net, the puck is swept up by Colin Wilson who fired it in despite a crowd of players in the Wild crease and he scored.  Devan Dubnyk was incensed as the Wild was head coach Bruce Boudreau who challenged the play for goaltender interference.  Upon review they agreed Carl Soderberg was guilty of bumping into Dubnyk, and it was ruled ‘no goal.’  The relief would be short-lived as Wilson would find Tyson Jost with a long outlet pass that got him behind the Minnesota defense (Suter was caught completely off guard and flat footed on the play) and he’d skate in beat Dubnyk with a quick shot.  2-1 Colorado.  On the next shift, Matt Calvert would get into it with Brown.  Calvert was in control early as he was peppering Brown’s face with jabs but Brown would recover and start throwing some solid right handed haymakers and the two pugilists would fall to the ice.  I’ll call it a draw.  Minnesota would try to answer back and after some good pressure from in close, Grubauer would be caught out of position and Jason Zucker would let go of a backhander that missed on the open cage.  A shift or two later it was Suter setting up Zucker for a one-timer that Grubauer got just enough of to get the puck to roll just wide of the goal.  A late power play for Colorado gave them some great chances as the Wild flirted with disaster.  Minnesota was able to force Colorado to a few one-and-done’s and they’d get the big kill.  The Avalanche would take a late ‘too many men’ penalty but the Wild did nothing with it because they weren’t moving their feet and making it easy for Colorado to clog up the shooting lanes and they’d going into the 2nd intermission trailing 2-1.

3rd Period Thoughts:  Minnesota would start the 3rd period on the power play and Colorado’s penalty kill was conceding the perimeter to the Wild and they’d take a bunch of shots but none really threatened Grubauer and they’d get the big kill.  The Wild kept attacking and Zucker had another good chance from the high slot that Grubauer steered aside.  Fehr would haul down Nathan MacKinnon giving Colorado a golden opportunity to extend its lead.  The Wild’s penalty kill did a decent job of applying good pressure on the Avalanche puck carriers and they get a few quick clears of the offensive zone.  Towards the latter half the Avalanche a power play MacKinnon would hammer a shot that Dubnyk stopped and then he’d deny Wilson’s rebound bid and the Wild were able to get another big kill.  The ice was still somewhat tilted towards the Wild’s end of the ice and MacKinnon would let go a shot from the high slot that Dubnyk somehow stopped.  Minnesota would try to go to work for the equalizer as Brown was stopped at close range by Grubauer.  Grubauer would make another giant stop on Aberg after a nice pass by Rask near the crease as time continued to evaporate from the clock as time was starting to run out for the Wild.  Minnesota was crashing the net with a purpose but all too often the Wild weren’t crashing the net with sticks on the ice.  The home crowd would agonize as Nemeth bear hugged Zucker who was trying to fight for some time and space on the ice but there was no call.  The Wild seemed to be out of gas in the closing minutes.  Minnesota would pull Dubnyk for an extra attacker but inexplicably they’d decide not to skate in the puck into the offensive zone and instead dump it in.  Ian Cole would gather up the puck and flip a long range shot from beneath his own goal line into the yawning Wild cage.  3-1 Avalanche.  Minnesota would keep Dubnyk out of the net and the Wild would try to crash the net a few more times but to no avail as they’d fall to Colorado.

LW – Kirill Kaprizov (CSKA Moscow, KHL) ~ the super skilled Russian survived a vicious hit to the head by the elbow of Dynamo Moscow’s Igor Makarov to chip in an assist on 3 shots in CSKA Moscow’s 4-0 win that gave them a 2-1 series lead.  Kaprizov has 2 goals, 6 points, and is a +3 in 7 playoff games. 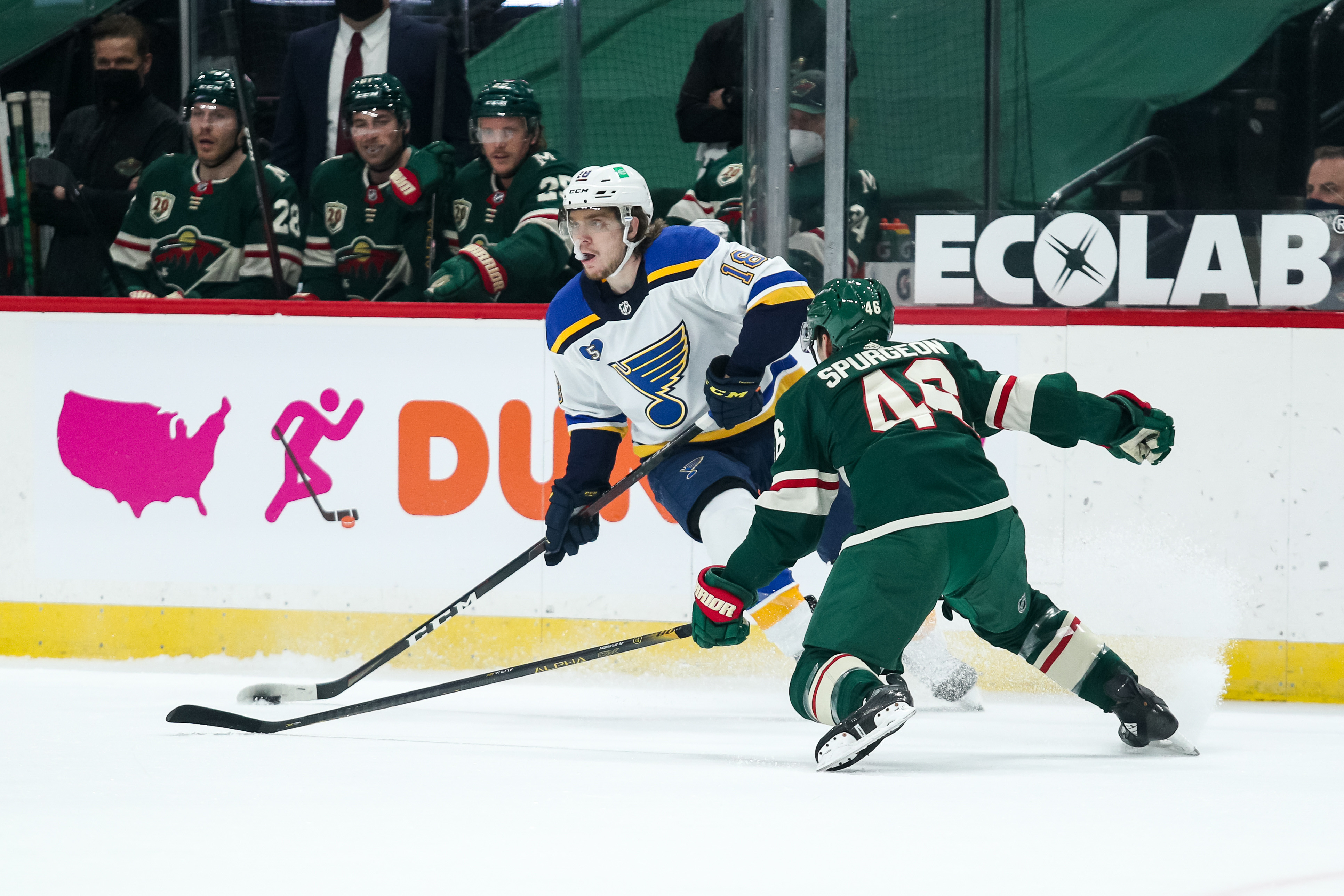