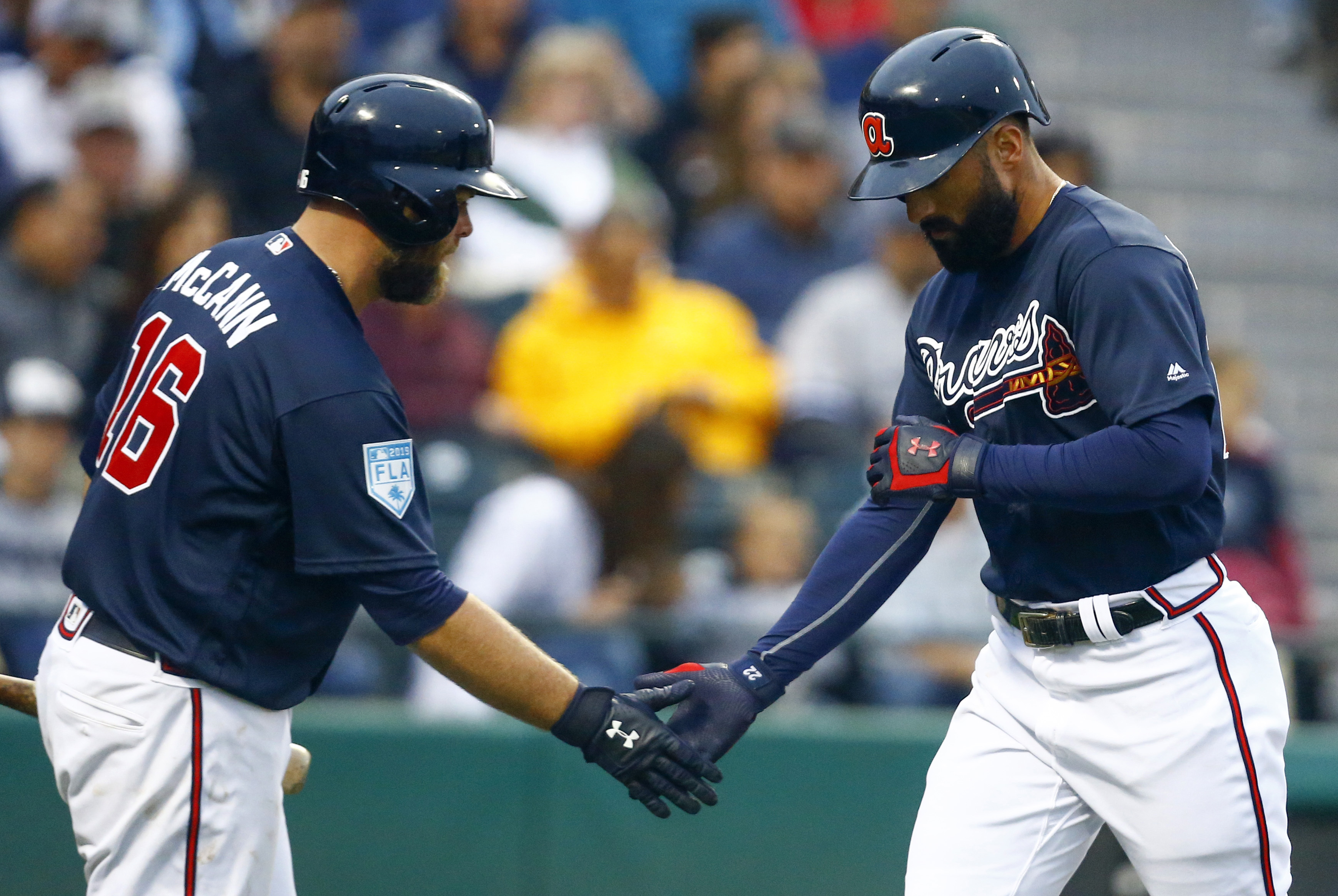 The high-powered Bronx attack smacked around Bryse Wilson in the second inning and then gave Jason Creasy nightmares as they cruise to a 7-4 win during an evening game at Champion Field Monday. The Braves continued to utilize what is likely to be the batting order for opening day with Ender Inciarte leading off, Ronald Acuña Jr. in the cleanup role, and Nick Markakis to follow. Brian McCann was next, though if Ozzie Albies started as opposed to Charlie Culberson, McCann may have hit 7th.

As I said, Bryse Wilson got the start and we saw the good – a dominant first that ended by over-matching Giancarlo Stanton – and the not so good during his performance. Overall, I don’t think he hurt his chances to make the opening day roster or even really help it. He gave up five hits and three runs, but walked only one batter and K’d 4. You’ll take that against a Yankees lineup that, in addition to starting Stanton, also included Brett Gardner, Aaron Judge, Luke Voit, D.J. LeMahieu, and Austin Romine.

In the sixth, Arodys Vizcaino was dominant with a pair of K’s. With the injuries to A.J. Minter and Darren O’Day removing them from the opening day roster, Vizcaino becomes extra-important as one of the few pitchers the Braves have any confidence in during high-leverage performances. Jesse Biddle also worked a scoreless frame, though he did give up a hit and a walk. I’m going to go more into Wes Parsons shortly, but he finished the evening by retiring all six batters he faced with three K’s.

Offensively, the big knocks came from Markakis and Dansby Swanson. Markakis smacked his first homer and reached base three times. Meanwhile, Swanson, who has been hurt by the “hitting it hard right at someone” bug this spring, finally hit it where they weren’t. In the sixth, he singled to the opposite field for two ribbies to cut the lead to 7-4. Everyone has raved about how Swanson has looked this spring from a swing and pitch recognition standpoint. The numbers haven’t been there, but good habits often lead to good results eventually.

You’re forgiven if you think Wes Parsons just materialized out of nowhere. He wasn’t drafted out of Clarksville High School in Tennessee. Nor did he hear his phone ring during the 2012 draft after his time at Jackson State Community College in Jackson, TN. On July, 2012, he inked an amateur free agent contract with the Braves. The next May, he made his debut. Now, as the 2019 spring training enters its final week, he has a chance to make an opening day roster.

Parsons has shined at times – 2.63 ERA in 19 starts in 2013 with Rome was a great eye-opener. Yet, he’s never been that known of a prospect even though he predates pretty much every Braves prospect you can think of. He’s one of the few Braves minor leaguers still around who played for the Lynchburg Hillcats during the franchise’s brief run in Lynchburg, VA. Of the 50 or so players who logged time with the 2014 Hillcats, only Johan Camargo and Parsons are still with the franchise. Parsons was here well before Mike Soroka, Ian Anderson, and Austin Riley.

As a borderline prospect, Parsons always played second-fiddle to other “better” options as far as innings went. When the team needed a starter, he filled in. When there were too many highly-rated starting prospects, Parsons became a reliever. Injuries didn’t help, but Parsons has never logged 120 innings in a single season. Throughout it all, though, Parsons kept improving. He added weight, found more consistent velocity around the mid-90s, and continued to develop his money pitch – a slider. He even made it to the majors last season for one game, tossing five innings in relief.

This spring, Parsons has been lights out. In eight games, he hasn’t allowed one run in eleven innings while yielding just three hits and a walk. He’s also struck out ten. As far as dominance goes, Parsons has been that. Now, there is a little bit of a caveat here. Parsons has finished off five of the eight games he’s pitched in. That means that he has rarely faced a major leaguer who are often already out of the game by the time Parsons enters.

To highlight this, according to Opponent Quality, a stat from Baseball-Reference, the average player Parsons has faced this spring is rated at 6.6 on a scale from 1-to-10. What OppQual is based on is where players spent the majority of the previous season at. A 6.6 falls between Double-A and High-A. To put it more bluntly, most of the guys Parsons has faced will start 2019 below Triple-A.

But results win the day. With the bullpen losing Minter and O’Day to open the season, Parsons, who is already on the 40-man roster, could be playing himself into an opening day gig. That would be a hell of a ride that for a guy who got zero love in the 2012 Draft.

While Wilson faced the big boys from the Yanks, Kevin Gausman prepared for a minor league game on the backfields for today. In two starts this spring, Gausman has retired just six batters. He’s thrown simulated innings, but that’s not exactly the same. While Gausman still seems on target to be on the opening day roster, the Braves could choose to place him on the Injured List to open the year and activate him for April 7, the first time they would need a fifth starter. That would give Gausman extra time to catch up after being slowed earlier in camp by shoulder discomfort.

A few not-too-secret items have been released from Brian Snitker over the last 24 hours. One, Julio Teheran will, in fact, start on opening day. This was expected after the Mike Foltynewicz injury and Teheran’s performance this spring, combined with Sean Newcomb’s, only made that more likely.

Snitker also appeared on 680 The Fan this morning and explained that Ronald Acuña Jr. will be hitting cleanup to open the season. Again, this simply makes official what we already knew.

With spring training nearing its end, here is my projected roster. If a player is in italics, they are on the roster bubble and could easily lose their spot.

-The Braves welcomed Ralph Garr to camp as a guest instructor this week.

-Max Fried tries to make a lasting impression today as he starts for the Braves against the Nationals at 1:05.