Your Morning Dump... Where we speculate about IT's future because that loss sucked. 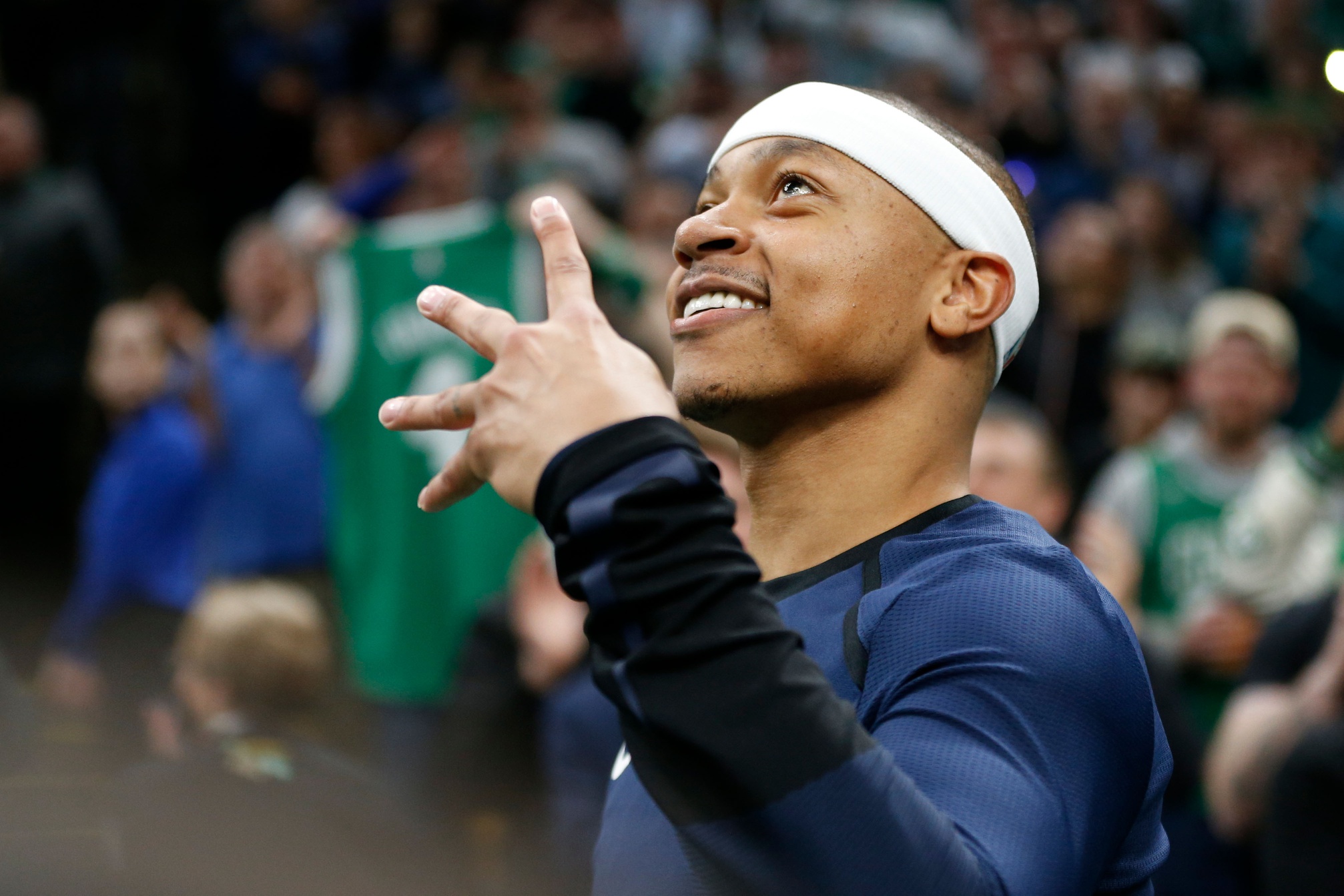 Your Morning Dump... Where we speculate about IT's future because that loss sucked.

What might have been if the Celtics had kept Isaiah Thomas around instead of dealing him for Kyrie Irving?

“We would have probably won a championship already,” Thomas confidently declared after his Denver Nuggets posted a 114-105 triumph over the Celtics in his first game back on the court in at TD Garden since the jaw-dropper that delivered him to Cleveland in August 2017.

“It was tough when it happened because it was out of nowhere and I was hurt,” said Thomas. “If I was able to play off the trade, I think it would have been easier for me to get through that. But I don’t hold any grudges. I’m through it. Things happen. Everything happens for a reason and I’m just glad to be back healthy and be back out there.”

Don’t get me wrong–I love IT–but it’s hard to see how the team would’ve gotten a championship, given that he’s spent the last couple years doing rehab. With Jae Crowder in the rotation, maybe the team beats Cleveland last season and makes it to the Finals, but that team wasn’t going to do much against Golden State. Maybe in an alternate universe where IT doesn’t have a crippling hip defect and Gordon Hayward doesn’t break an ankle, the team makes the 2018 Finals, but they’d be hard-pressed to push Golden State to seven games, methinks, let alone win a title.

But that’s immaterial. You want this kind of irrational confidence from your players. A team full of guys who are already telling themselves they haven’t got a chance is a team that hasn’t got a chance.

As the Celtics and Nuggets locker rooms cleared out, Isaiah Thomas was doing what he has done quite a bit of when he was in Boston and since he left – talking with Celtics head coach Brad Stevens.

The two have a connection that – even after Thomas left and is now on his third team in less than two years – is extremely tight.

No surprise Stevens was among the biggest fans of the video tribute for Thomas following the first timeout in the first quarter of Denver’s 114-105 victory on Monday night.

“Well-deserved ten times over,” said Stevens when asked about the reaction of the fans to Thomas’ video. “You know, like I can’t say enough great things about Isaiah. I could sit up here all night and certainly that video tribute was great. Our people did a great job on it; it was very  – it was emotional and it was – it could’ve lasted a lot longer. So, greatly appreciative of our time together and it was…I was glad that he got that moment.”

So, what’s next for Isaiah Thomas? It seems unlikely that he’s going to be a part of the Nuggets’ plans going forward, as he’s fallen out of their rotation. But that raises a legit question whether or not there’s a spot for him in Boston.

I think the Celtics would prefer to sign Terry Rozier to a long-term deal over signing IT for the vet’s minimum on a one-year contract, but Terry’s value is a huge question mark.

Coming into the season, we all wondered how the team would be able to afford him; now it’s hard to imagine any other team in the league extending him an offer sheet.

If the team can lock Rozier up on a cap-friendly deal, it’s hard to figure out where they would use IT, but if some team does the unexpected and throws a pile of money at Scary Terry, I think the team will let him walk. He’s not a young guy as far as that goes, and with a full body of work to review, it seems fairly clear that he only thrives when he’s starting–and he’s not good enough to start for a championship caliber team.

On the other hand, I think IT would thrive in a Vinnie “Microwave” Johnson role with a championship team (fun fact: Danny Ainge gave Vinnie Johnson that nickname).

Page 2: Where IT finally got his tribute video

Well. What can you add to that?

Finally: Where I’m still going on about women’s basketball in South Dakota

Feel free to skip down to the rest of the links if you don’t feel like humoring me in this.

However, I think this is pretty special: South Dakota’s total population–about 869,000, is just a smidge more than that of Worcester County, Massachusetts. The state covers 77,000 square miles–as compared to 10,554 for Massachusetts and 1,579 square miles for Worcester County. To put it simply, unless you’ve been to this part of the country, you have no real conception of just how sparsely populated this state is.

Yet, the state’s two flagship universities (combined enrollment: 23,000–as compared to UMass Amherst’s 30,000) have both put teams in the NCAA women’s basketball tournament. SDSU has a #6 seed and the clearest path to the Sweet 16 they’ve ever had, and USD drew a #9 at-large seed. Kids on these teams played high school ball in towns like Crofton, Nebraska (population: 689) and Onida, South Dakota (population: 659). I mean, we’re talking places that make the town in Hoosiers look like a booming metropolis.

USD has a decent shot against #8 Clemson–they’re the more seasoned team, by far–but they’ll be hard pressed to do much against Mississippi State in the round of 32. SDSU, however, if they get past Quinnipiac, faces a very beatable Syracuse team to get to the Sweet 16, and then it’s likely a rematch with Oregon, a team they played close earlier this season, and who–if I’m being honest–will probably end the Jacks’ season if it comes to that.

Boston.com: ‘The world knew my name when I played for the Boston Celtics’ | Isaiah Thomas finally gets his Celtics tribute video | What Kyrie Irving had to say about Isaiah Thomas’s return to Boston