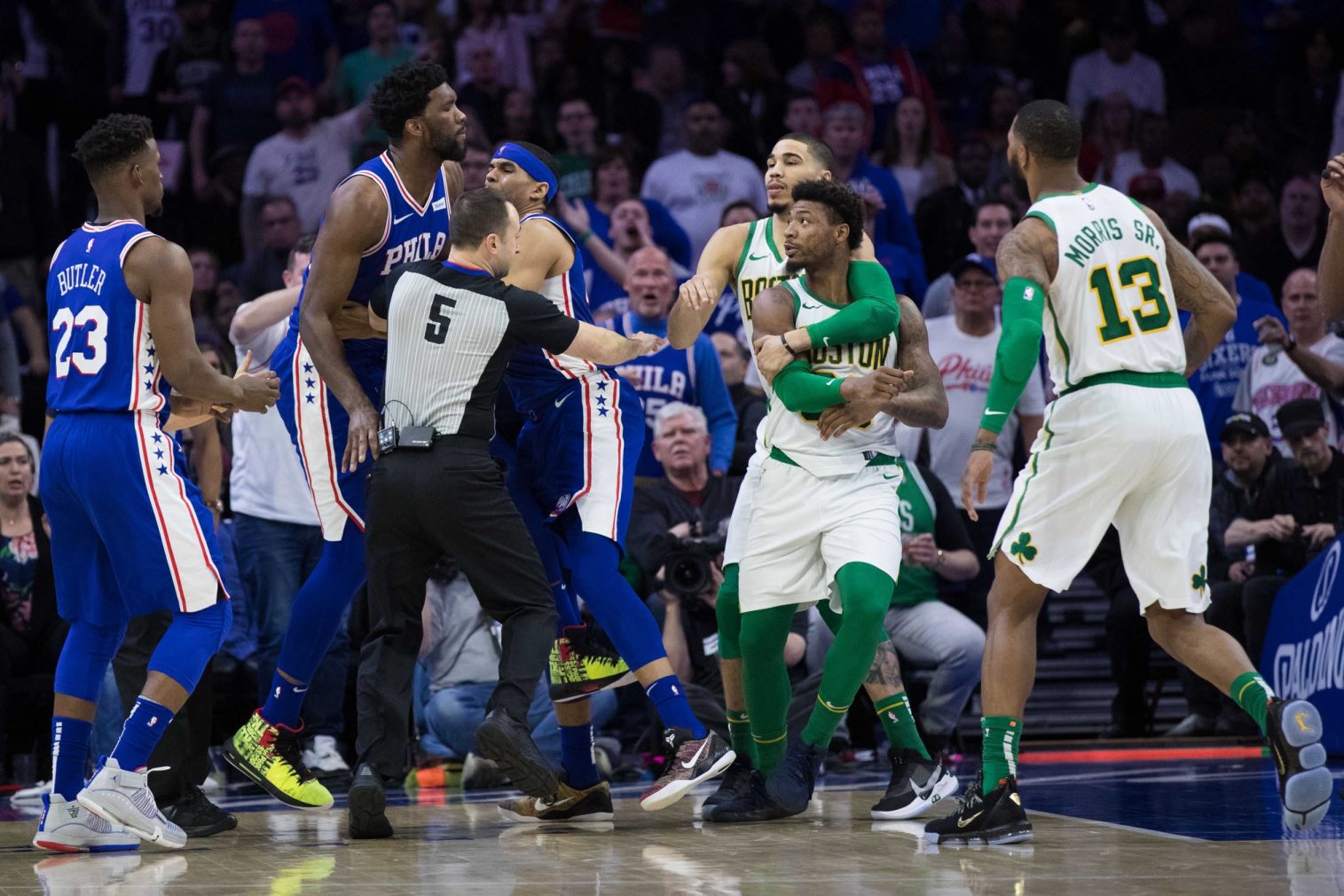 IN A NUTSHELL
Matchups between the Boston Celtics and Philadelphia 76ers have made for some of the most enthralling NBA basketball in the league’s history. The current iterations of these squads are no exception. And in recent years, the Celtics have beaten the Sixers like mules rented at a bargain. Like Chuck Barris’s gong. Like the poor dog in the first verse of “Born in the U.S.A.” You get it.

Tonight did not go that way. Despite a dominant first half and outstanding performances throughout by Kyrie Irving and Al Horford, an injury to Aron Baynes and a skirmish between Joel Embiid and Marcus Smart galvanized Philly and weakened Boston on thoroughly the defensive end. Add some clutch shots by noted obsessive Chipotle gulper Jimmy Butler in the final minutes, and it added up to a close but agonizing 118-115 defeat for the Cs. (You might even call it stomach-churning agony.)

WHAT WENT RIGHT
Well…the whole first half, really. At times it appeared like Boston was straight up toying with Philadelphia. The Cs’ number of swingmen and ease of switchability has overwhelmed all iterations of Philly in this new era of Sixers competitiveness, and tonight was no different for the entirety of the first half and large portions of the second.

WHAT WENT WRONG
As much as I want to blame it all on the Embiid stuff (see further, very detailed discussion below), he wouldn’t have had all of those foul shots if Celtics players hadn’t fouled him on numerous occasions. (There were also plenty of questionable calls, which are also discussed below.) His energy shot up to 11, he became monstrous on the boards and his long-range abilities were a real problem.

There is also no excuse for letting Jimmy Butler pull off the shit he pulled off. The Celtics know how to defend him perfectly well, but you wouldn’t have been able to tell from their reaction to his masturbatory run of shotmaking that only occurred because he didn’t want Embiid being solely responsible for Philly’s comeback. (Yes, I’m armchair psychologizing here, but the evidence of Butler being a miserable little asshole is ample. I feel safe making this guess.)

WHAT THE HELL
So let’s take a look at the fight from multiple angles:

A fight almost breaks out after Marcus Smart pushes Embiid in the back during the game (@AAANe_MAnews) #AAANortheast pic.twitter.com/dHVVO5dKQB

I can’t objectively say Marcus Smart didn’t deserve an ejection for his physical reaction to Embiid’s elbow. I also totally understand Smart’s anger, and, all things being equal, would applaud it. Embiid is a rampant and unrepentant elbow-thrower who doesn’t take flak for it as many other players would be due to his admittedly enjoyable, oft-comic persona, and it’s satisfying on a reptilian-brain level to see a dude who’s a foot shorter than the Philly superstar center send him flying to the floor like a blast from a fucking Taser.

I also can’t deny that on at least some level that shit cost Boston the game. It fired up a middling-until-that-point Embiid and spurred a lot of “just in case” foul calls in his favor, which accounted for his Hardenesque number of trips to the stripe (in addition to the legit, boneheaded Boston fouls). After that, plus the loss of Baynes’ defense due to injury, the loss is much less surprising.

Embiid had his cute little quote about this whole thing tonight in his postgame ESPN interview. But if Celtics players mean nothing to him, why is he relying on the gamesmanship of subtle, periodic elbows to get Smart’s blood up until The Man Who Is About That Life can’t take it anymore? Remember, this man who pontificated on social media about dunking on Baynes while on vacation after a playoff series he’d just lost 4-1, because he had nothing to say about how thoroughly Al Horford had schooled him in the second round. Uncle Al slapped his ass like a recalcitrant child in the 1950s. He does not want this team’s smoke in the playoffs or in general, one win notwithstanding. (Also, “most unstoppable player” my ass. Harden, hate his style of play or not, would like a word with you, Jojo.)

As for the rest? Simmons micturates himself with fear (Google it) at the prospect of facing Celtics players. Redick is an aging, sniveling wannabe Brahmin with Kool-Aid blood in the clutch. Jimmy Butler is still a virus—just one that’s yet to fully metastasize in this situation—because he’s a pathological douchebag with delusions of grandeur.

Tobias Harris and Amir Johnson the only Sixers I respect.