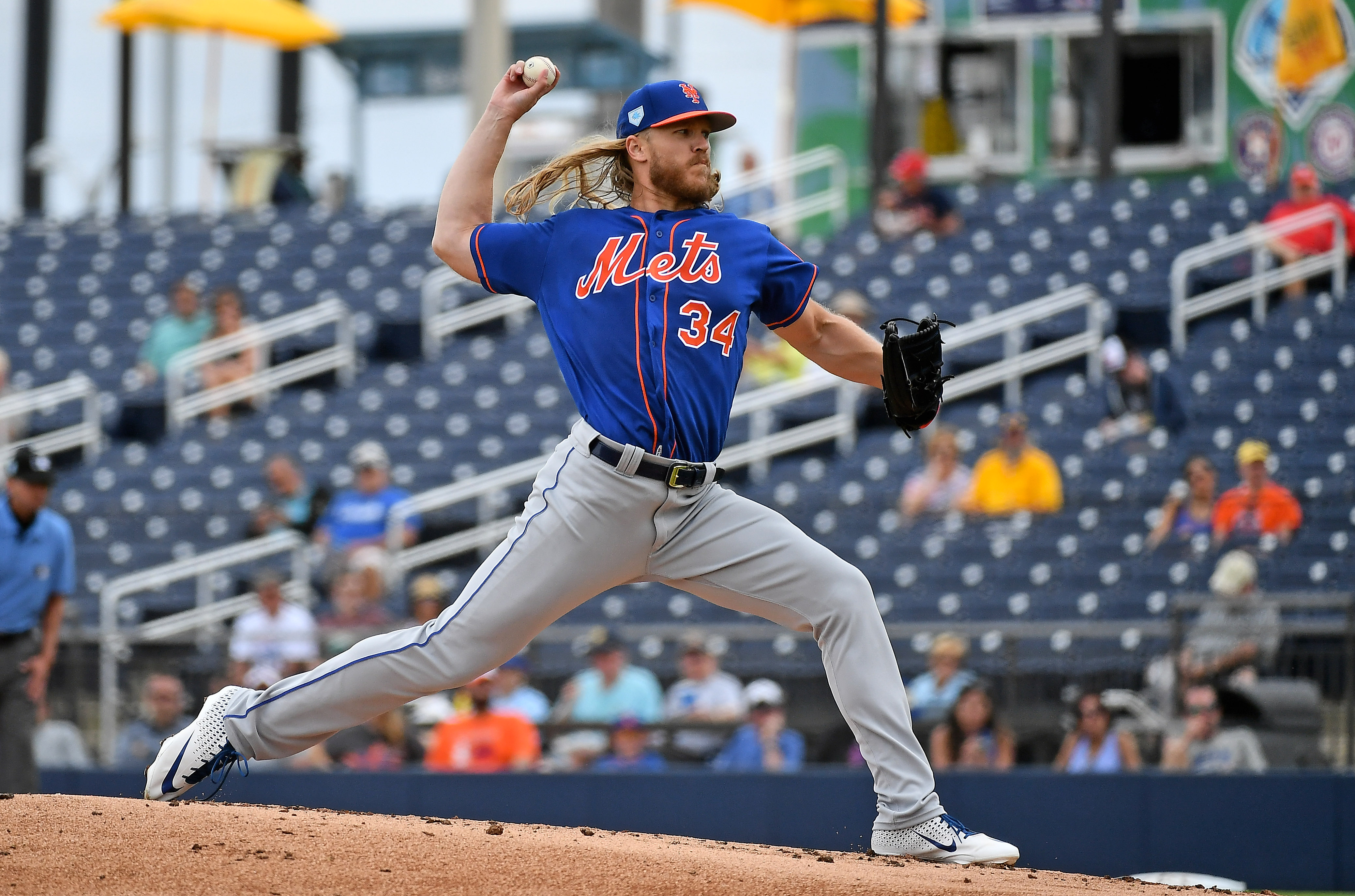 What you’re about to read is my personal views on which specific players will be the keys to the 2019 season for the New York Mets. So look, every single player on the roster who has a big year will be huge for the New York Mets. If Tomas Nido hits 25 dingers and drives in 100 this season, that’ll be a huge help. But anybody who tells you that this has a reasonable shot of happening is smoking something with a little extra something, so don’t trust them. Then you have a guy like Robinson Cano, who is important to the club, but we can be reasonably sure what we’re going to get from him.

So when I give you the players that I think will tell the story of this season. they’re my picks for the players who either have ceilings that are high but reachable this year, or players who can’t do much more than they have but could really take a deep dive for whatever reason. I give you Noah Syndergaard right off the bat because it’s a gimme that his season will be extra important for the Mets. (I mentioned it in passing a few weeks ago.) Syndergaard had a good season last year while bouncing back from a lat injury that kept him out of most of 2017. This year represents what could be that next step for him … the step that takes him to Jacob deGrom 2018 levels. (The ERA may not be historic, but the number of K’s or other aspects of his season might be.) I am highly optimistic that this is going to happen for Syndergaard, so he’s the gimme of the group.

The actual list of five contains some obvious ones, and maybe a couple that you might not think are obvious. But here they are in no particular order:

Conforto has been a mixed bag in his major league career. He has two down years and one and a half up years on his resume, including an All-Star appearance. I mark 2018 as a down year in stats alone, but remember that the first half of 2018 was played while some players might have still been recovering from the horrific shoulder capsule injury he suffered late in ’17. The second half of 2018 featured a .273 average with an OPS of .895, while hitting 17 homers (nine in September) and driving in 52.

If Conforto’s 28/82 is considered a down year, imagine what he could do in a full season free of injury concerns. .280/35/95 with an OPS in the mid .900’s isn’t impossible and isn’t unreasonable to ask from him in his age 26 season. If Conforto can provide that in the middle of the order, it would give the Mets a threat they haven’t had since Yoenis Cespedes started down the trail of injuries. Conforto’s big spring is enough to make you salivate at the possibilities.

Amed is another player who blossomed late, but in his case it wasn’t an injury but rather the perils of being a major league rookie that he overcame. In August and September, Rosario hit .284 with an OBP of .318 and an OPS of .731. If Rosario can get the on base pct. up just a little bit (think .330), then I’d sign up for this over a full season, and it would make the top of the lineup lethal when paired with …

McNeil earned a starting job coming into 2019, but he’s battling a position change coming into the season. With the acquisitions of Robinson Cano and Jed Lowrie (if he ever plays), McNeil was initially pushed into a super-sub role which would have contained some outfield work … and it would have been a complete waste of his abilities.

But at least the Mets tried to leave him in left field and let him learn the position. Injuries to Lowrie and Frazier have re-calibrated the Mets’ thinking a little bit so he’s been playing some third base in the spring. But at least he’ll get some regular at-bats somewhere. I’d prefer he be at one position, But hitters hit, and McNeil is hitting at a .324 clip (as I type this on 3/19) in spring training. His style of contact hitting (which I’m sure Chili Davis loves) will give the Mets a dimension from long ago to set the table for players like …

The Mets total WAR out of their first basemen was at -2.5, which was third worst in all of baseball ahead of the Rockies and Orioles (the Orioles were in last by a lot … -4.9 which is “holy OPS, Batman!” level thanks to Chris Davis.) Imagine if the Mets could put Alonso there for close to a full season (what would he miss, the first 11 games of the season as a Super Two?) and bring his sick power to the middle of the lineup. He doesn’t have to be Rookie of the Year, but if Alonso is more Jose Abreu than Matt LaPorta, the Mets will be much better than last season (and maybe Jacob deGrom will get that run support he has been looking for since 2017.)

His great spring along with Dominic Smith’s great spring make it an interesting conversation about service time and having a decent option for 11 games (which Smith is proving to be, at least). But if you’re going to make Alonso the guy, then make him the guy. The Mets could always make up the service time by buying out a couple of seasons down the road, although it would be a departure from what the Mets usually do. But this is what Brodie gets paid for.

You can really target anybody in this new Mets bullpen as being key, but it starts and ends with Diaz, who comes to the Mets for his age 25 season after a monster season in Seattle. In fact, it was a monster so big that it’s impossible to ask Diaz to put up a WHIP of 0.79 again, especially after switching not only teams, but leagues too.

In many ways, Diaz might be the biggest factor in whether the Mets sink or swim this season if everybody else plays up to their potential. It’s unfair, but there is also an eerie parallel to the acquisition of Francisco Rodriguez ten years ago. (Only difference is that Diaz’s 2018 was significantly better than Frankie’s 62 save season in 2008.) If Diaz is anywhere close to reliable, it’ll go a long way towards a successful 2019.

Zack Wheeler: Because I’m sure somebody will bring him up. A full year of the Zack Wheeler from the last half of 2018 would be incredible (9-1, 1.68 ERA, 0.81 WHIP). I can’t expect him to keep that up unless being in his free agent year keeps that fire up. I also can’t expect him to revert back to first half Zack Wheeler. The lessons he learned from watching deGrom will serve him well, although he’ll run into trouble against teams who scouted him well during the second half last year.

(Feel free to throw Steven Matz into this discussion as well, though as little as I know about what to expect from Wheeler, I know less about what to expect from Matz. But when it’s all said and done, these are the third and fourth spots in the rotation. If deGrom is deGrom and Syndergaard is what I think he’s going to be, Wheeler and Matz could just be decent and the Mets will have a shot this year.)