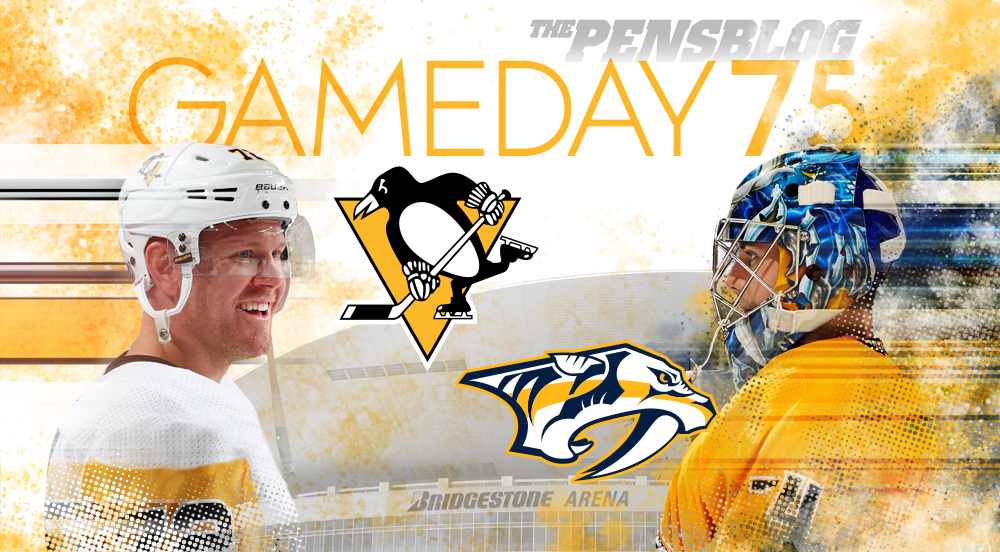 The Penguins continue their road trip as they head to the Music City to take on the Predators in a rematch of the 2017 Cup Final, which obviously went the Penguins’ way.

The stakes are high as the Penguins have dropped two straight games that went beyond regulation, both games where they held a lead and allowed a tying goal with under 3 minutes left. Most recently, they allowed the Canes to tie the game at 2 and take the shootout.

Sullivan: "We’d like to believe that we can defend leads better. We have in the past for a long time and been very good at it. So I know we’re capable. But having said that, I thought it was a hard-fought point for us tonight.” -MC

You know how this all works, and it’s not time to panic yet (the Penguins hold 6 points on the Canadiens who do have a game in hand.

The Penguins sent Juuso Riikola and Joseph Blandisi back to Wilkes-Barre/Scranton and recalled Adam Johnson to give him a spin on the fourth line. Johnson has 40 points in 63 games for the Baby Pens.

The Predators have an identical 89 points through 74 games, but they sit in 2nd in the Central Division, 3 points of Winnipeg’s pace.

The Preds are a strong possession team, as of course is tradition, with a 52.45CF%, good for 7th in the league.

On special teams, though, the Predators have struggled. They’re next-to-last in the league with an abysmal 13.0% conversion rate with the man advantage. The penalty kill is tied for 11th in the league, killing off 81.1% of situations.