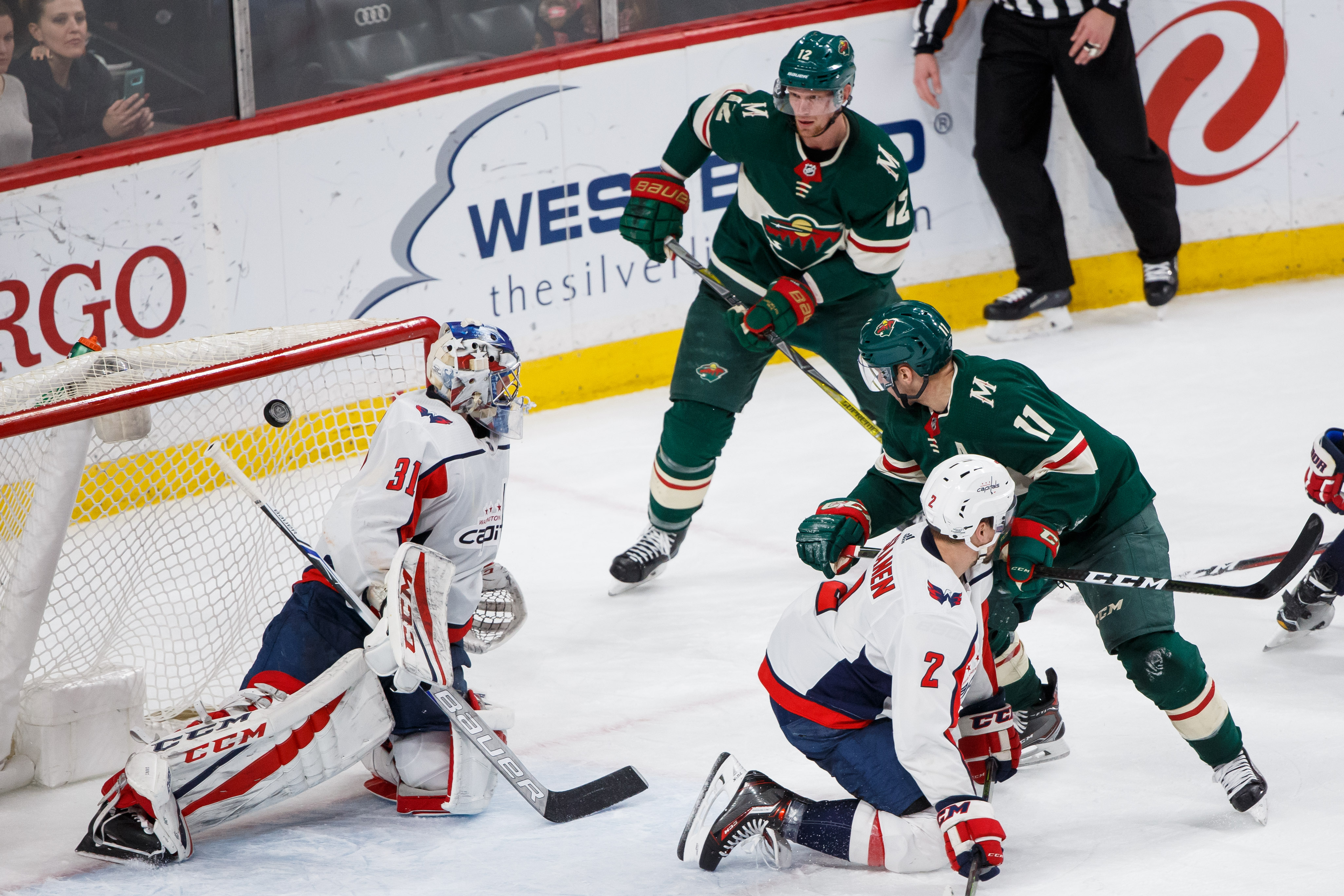 As the Wild appear to be winding towards its first non-playoff season in the last 7 years, the questions will no doubt begin about what went wrong.  Injuries are certainly a factor, but all teams deal with them.  Underperforming individual seasons are another likely culprit, but those questions get more uncomfortable when you don’t have the buffer of a few million dollars in playoff tickets and concession sales.

What?  Too soon you say?  Then you realize the Wild are playing the Washington Capitals next and realize its not quite so crazy.  You look at the rest of the schedule and you can understand why some fans feel your team’s season is probably road kill.  Will the Wild do anything to help or hurt their fleeting playoff chances tonight?

1st Period Thoughts:  Minnesota was looking to get their forecheck going as the top line of Eric Staal, Kevin Fiala and Zach Parise were buzzing early.  The Wild were not giving Washington much in the way of time and space as they attempted to neutralize the Capitals’ high powered offense.  After a few minutes, the Wild would get a high sticking call as Fiala’s stick hit John Carlson in the face.  The Capitals’ power play moved the puck quickly as they set up their big shooting wingers and defenseman for one-timers.  Minnesota’s penalty killers did a good job at challenging passes and not letting the Capitals to send pucks through the middle of the ice.  The Wild got the big kill and they’d try to go back on the attack and Fiala would get a step on the Capitals’ defense and he’d race in for a backhand chance that was stopped by Brayden Holtby before Fiala was erased by a hit by Tom Wilson.  The Capitals would try to counter and with some pretty passing by T.J. Oshie he’d set up Nic Dowd out front who was denied by a reaching save by Devan Dubnyk.  The action was fairly sleepy to this point in the game as the Wild’s strong defensive play was making this more of a chess match than firewagon hockey which is probably a good thing for Minnesota.  The Wild’s penchant for drop passes was a fairly dangerous practice against a team like Washington which has the speed to make such plays into scoring opportunities in transition.  Minnesota would try to keep things slow by working a cycling game in the corner but despite the possession not many shots were being directed on goal.  The Wild’s kid line of Luke Kunin, Ryan Donato and Jordan Greenway would make something happen as Donato won a battle for the puck along the boards was about to enter the zone when the puck was knocked off his stick to Greenway who kicked the puck forward and skated into it.  Greenway would use his frame to protect the puck and then make a power move to the goal and as Holtby sprawled to make a save Greenway wrapped it around him and buried it.  1-0 Wild.  Minnesota would take a late penalty as Marcus Foligno was called for tripping as Carlson fell over Foligno’s stick blade.  On the penalty kill, Minnesota’s puck pressure near the point by the Wild turned into a partial breakaway for Jason Zucker who turned on the jets but his backhander would miss wide of the net.  1-0 Wild at the end of the 1st; Minnesota had to feel pretty good at how well it had played thus far.

2nd Period Thoughts:  Washington had 46 seconds of power play time left to start the period.  Minnesota’s penalty kill did a decent job at getting sticks into passing lanes; denying Washington from creating conflict via the cross-ice pass.  The Wild were waiting to go on the attack as Matt Read fed a pass to Zucker who raced into the Capitals’ zone and he’d send it back to Read who was wide open in in the high slot for a quick shot that was gloved by Holtby.  Minnesota continued its counter punching style as J.T. Brown swept up a puck in the Capitals zone where he tried to sneak a shot inside the left post but Holtby gave up a rebound but unfortunately the Wild wasn’t able to get a stick on the puck.  The Capitals started using its speed more on the attack and Washington’s 3rd line got Minnesota chasing as Brett Connolly had a few close chances before he drew a slashing call on Brad Hunt.  The Wild’s penalty killers would get an early clear of the zone and then did a nice job of challenging the zone entry.  The Capitals would get set up and they nearly cashed in as a cross-ice pass made its way to Carlson for a one-timer that was just fought off by Dubnyk.  Minnesota would get another big kill and try to go back on the attack to add to its lead as Brooks Orpik and Jason Zucker would wrestle a bit after the whistle making it 4-on-4 for the next two minutes.  Minnesota would have a great opportunity as Parise nearly cashed in from in close but his shot skidded across the crease; then moments after that Kunin had a chance from the slot that struck the post and went out.  Washington would tie the game up as Nick Jensen let go a wrist shot that was deflected up and over Dubnyk’s shoulder.  1-1 game.  Minnesota would try to answer back as Zucker found himself mostly open in the slot but he’d fire a shot high and wide.  In the last few minutes, the Capitals raised their level of physical play and started to put the Wild on their heels as Travis Boyd and Chandler Stephenson started to buzz in the Minnesota end.  Minnesota was just trying to get out of the period still tied as Brown raced into the Captials’ zone where he made a nice no-look backhand pass to Anthony Bitetto at the point but his shot was gloved by Holtby.  Minnesota would draw their first penalty of the game with 8.6 seconds left in the period.

3rd Period Thoughts:  The Wild had nearly a full power play to work with to start the 3rd period.  But it would’ve been considered a comedy of errors if it wasn’t so ugly to watch.  Bad passes, poor design, lack of focus it all was bad for Minnesota as they didn’t even force Washington’s penalty kill to really defend as they cleared the zone on their own gaffes.  As the penalty expired, the Capitals found Tom Wilson open for a breakaway but Dubnyk would steer his backhander wide of the mark.  The Capitals were moving better and they kept applying pressure as Andre Burakovsky was denied on an attempt near the crease.  You just got the feeling the Capitals were getting closer and closer to notching the go-ahead goal.  But Minnesota still had its moments as Donato got a step on a Capitals defender and he’d take the puck to the crease where Holtby was able to steer his attempt away.  Wilson would get his legs tangled up with Parise and the Wild alternate captain would fall to the ice in pain.  Both clubs would trade chances back and forth as defenses seemed to loosen up a it.  Minnesota would finally be rewarded as a neutral zone turnover led to a breakaway for Kunin who wired a shot top shelf on Holtby.  2-1 Wild to stunned silence from the home crowd.  A few minutes later, a gate on the Capitals’ bench door seemed to be having troubles which stopped the game for a bit as they replaced a hinge.  Washington would pour it on late, activating their defense as Minnesota just looked to poke check pucks away and force the Capitals to waste time as they had to reset their attack.  Jared Spurgeon would make a great play from his knees to poke check away a puck and then swing a pass to get a clear of the zone.  Minnesota was getting bodies into shooting lanes and blocking shots late and they come away with a 2-1 victory.

It was a defensive struggle at first between the Roadrunners who had won the previous night against Iowa 5-2.  Shots were few and hard to come by but neither Iowa’s Kaapo Kahkonen or Tucson’s Adin Hill were giving up anything through the first period.  In the 2nd period, Iowa’s 4th line continued its hot streak as Baxter, Minnesota-native Mitch McLain buried his 10th goal of the season just a few minutes in.  Iowa would then extend its lead late in the period as Will Bitten partially deflected a Gerald Mayhew shot to give the Wild a 2-0 advantage going into the 3rd.  The Wild did not sit back and just defend its lead as they applied pressure late and Kahoken remained sharp as Iowa would seal a 2-0 victory.  Kahoknen had 24 saves in his 6th shutout of the season.

G – Mat Robson (Minnesota, Big 10) ~ the 6’3″, 190lbs left-catching junior goaltender carried most of the mail for the Golden Gophers this season sporting an 14-12-4 record, a 2.78 goals against average and a stellar .921% save percentage.  He was signed to a 2-year deal and will burn the first year of his contract this year.  He also cannot be sent down to Iowa either this season.

C – Alexander Khovanov (Moncton, QMJHL) ~ the skilled Russian was signed to a 3-year, entry level deal on Tuesday.  The mercurial forward has had a solid season for the Wildcats with 25 goals, 74 points, 94 PIM’s and is a +7 in 64 games.  Khovanov will have to cut down on his retaliatory penalties but he has good offensive instincts you can’t teach.

D – Simon Johansson (Almtuna, Allsvenskan) ~ the more aggressive defenseman of the two Swedish blueliners taken in the 2018 entry draft, his final regular season totals are only marginally better.  With 3 goals, 11 points, 28 PIM’s and is a -9 in 43 games.

LW – Kirill Kaprizov (CSKA Moscow, KHL) ~ the skilled Russian had 4 shots on goal and an assist on Mikail Grigorenko‘s game winning goal as CSKA Moscow defeated Dynamo Moscow 3-2, and advancing to the Gagarin Cup finals with their 4-1 series victory.  Kaprizov has 2 goals, 8 points, +4 in 8 playoff games.

C – Andrei Svetlakov (CSKA Moscow, KHL) ~ the 4th line center went 5-for-5 on his draws and had an assist on CSKA Moscow’s first goal as they prevailed 3-2 over Dynamo Moscow and advancing to the KHL finals in the process.  Svetlakov has a goal and an assist, 2 PIM’s and is a +2 in 7 playoff games.