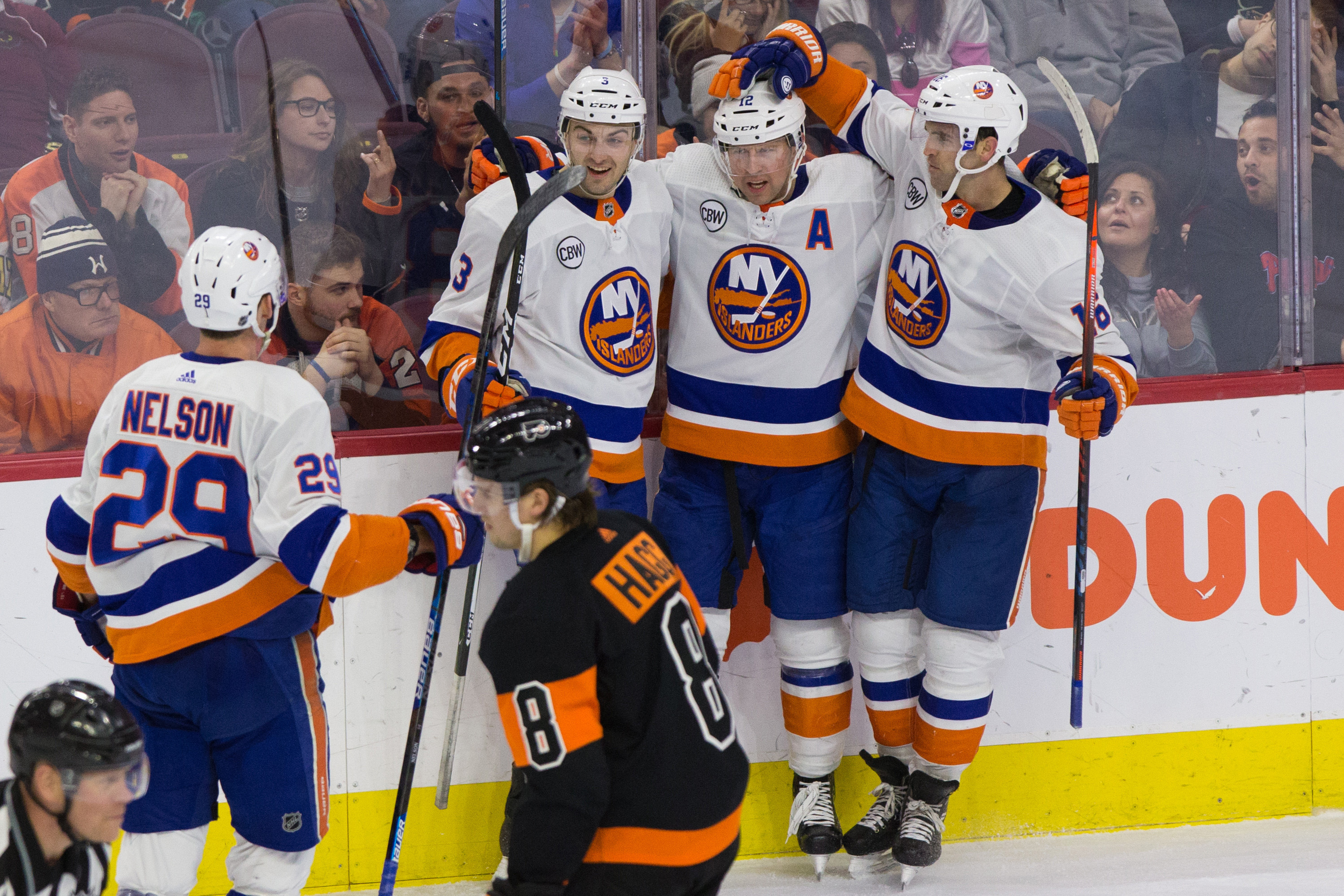 PHILADELPHIA, PA — The Islanders needed a win, bad. They needed goals, bad. And they got both on Saturday afternoon, with the biggest two coming from Josh Bailey in the final minutes of the third period.

The pair of goals — Bailey’s first in 12 games — helped the Islanders down the Philadelphia Flyers 4-2 and snap an ugly two-game skid. They also helped avert what could have been an unfortunate ending after the Islanders played a solid game.

It was a snipe from Bailey in the right faceoff circle with 3:57 left in regulation that broke a 2-2 tie. The Islanders forward let out an exuberant scream in celebration.

Just over a minute later, Bailey found the back of the net again off a feed from Leo Komarov.

“I was just trying to shoot it hard and high short side,” Bailey said about the game-winning goal. “The angle wasn’t great and sometimes you just need a little luck to get those in the back of the net.”

For the Islanders, that luck hadn’t been coming much as of late. They had been shutout in their last two games and outscored 9-0 in those two games combined.

It wasn’t until Brock Nelson scored at the 14:27 mark of the first period that the Islanders goal drought came to an end at 134:27.

“I think sometimes just results breathe confidence,” Bailey said. “Sometimes you feel like you’re doing the right things and the other team gets a bounce and things can snowball for you. Tonight we seemed to get one back with Brock and we really found our game after that.”

“In the third, a little bit of adversity but you’re going to get that this time of year.”

What a game for Josh Bailey! #NYIvsPHI postgame interview: pic.twitter.com/roFvwRH3JK

Despite allowing a whacky goal 6:39 into the first period to fall behind early, the Islanders had a good outing against the Flyers. New York outshot Philadelphia 40-24 through 60 minutes, which included a second period that saw the Isles put up 15 shots while holding the Flyers to five.

The Islanders maintained control of the puck for extended periods of time and hemmed the Flyers in their own zone.

Still, a 2-1 Islanders lead disappeared in the early minutes of the third period. After they failed to convert on a two-minute five-on-three power play, the Islanders took a penalty and the Flyers scored right off the draw on their own man-advantage to tie the game at two.

“We had some momentum swings. I thought the second period we played outstanding,” Islanders coach Barry Trotz said. “We weren’t able to score on the five-on-three and they got all the momentum there. … We sort of had to battle through that.”

The Islanders pulled within a point of the Washington Capitals for the Metropolitan Division lead with Saturday’s win. The victory also gave the Islanders some cushioning between themselves and the Pittsburgh Penguins for the time being.

Pittsburgh is in action Saturday night against Dallas.

Saturday was the first of two crucial games the Islanders will take part in over the weekend. The matinee with the Flyers and Sunday’s home showdown with the surprising Arizona Coyotes became even bigger after the Islanders slumped through a pair of losses earlier in the week.

Big because the last few games didn’t go in our favor,” Nelson said about the win. “Tonight to come out and respond the way we did with the goal being down to get back on the attack five-on-five. That’s our game and that’s the way we’re going to need to play down the stretch here and if we’re going to be successful.

“To get that feeling that you get everybody going and everybody is moving that is big for us.”

Robert Hagg’s fluky goal kicked off the scoring early in the first period. His shot from the point took an odd bounce off the end boards and the ricochet caught Casey Cizikas’ stick and went into the net to give the Flyers a 1-0 lead.

The Islanders responded later in the period when Nelson swatted the puck out of midair and past Hart to tie the game at one. Nick Leddy gave the Islanders their first lead of the afternoon at 10:58 of the second period when he ripped a one-timer from the high slot.

Shayne Gostisbehere’s eighth goal of the season tied the game at two at 6:16 of the third period.