Your Morning Dump… Where Marcus Smart is not backing down, he’s doubling down 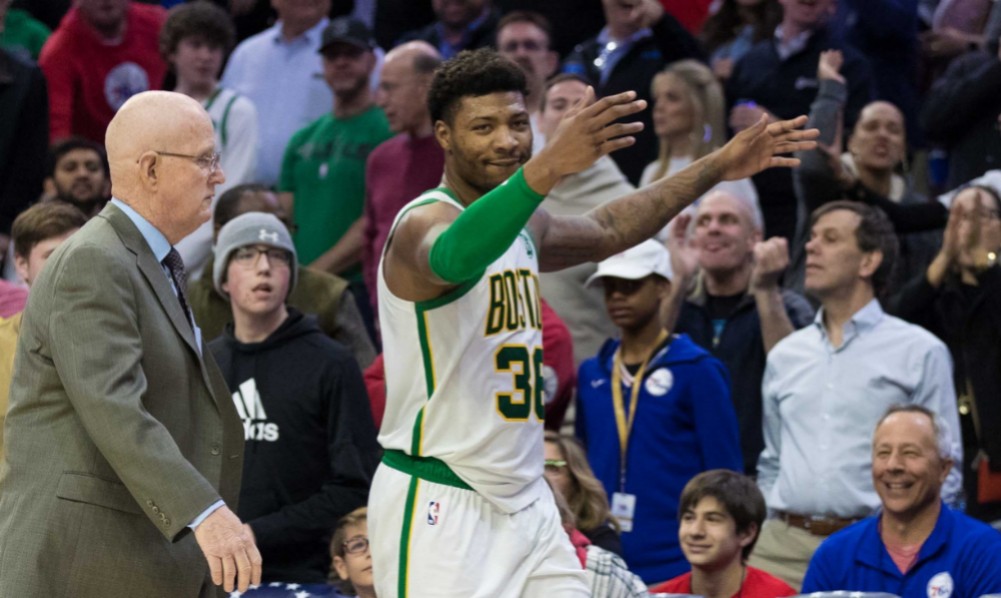 Your Morning Dump… Where Marcus Smart is not backing down, he’s doubling down

Sitting on the sidelines at the Charlotte Hornets practice floor, still dripping with sweat from a fun-yet-intense one-on-one battle with Jaylen Brown, Smart was more defiant than apologetic during his first chance to tell his side of the $50,000 dollar shove of Joel Embiid.

“It’s hard as a defender in this league, to play defense, unfortunately,” he began, his jovial post-practice mood shifting to serious as he recounted Tuesday night’s events. “You can’t touch anybody, and when you do it’s a call on you.”…

Smart sees the shove as achieving two things. First, sending a message to Embiid that the officials would not; that that level of physicality comes with consequences. Second, self preservation.

“it’s hard because now you send a message to a guy pretty much telling him you can’t protect yourself, you know, you’re supposed to just take that and allow it,” Smart said. “Unfortunately, I’m sorry, I just wasn’t raised that way. I always gotta protect myself at all times.”

You didn’t expect someone as scrappy as Smart to back down, did you? Hell no, he’s doubling down.

As Brad Stevens and many others have said, the personality traits that make Smart the intense competitor are the same characteristics that sometimes get him in trouble. Smart plays on the edge, and occasionally falls off that edge.

Most fans don’t want Marcus to back off that edge, but the problem is his incidents have now piled up too high. From hitting Matt Bonner in the crotch, to confrontations with the likes of John Wall and J.R. Smith, to the Embiid shove, his reputation as a volatile individual is now set in stone.

“You know I’m probably held on a different scale than anybody else,” Smart said. “I seen a couple nights before Russell Westbrook do the exact same thing and he got hit with a flagrant one. I got ejected, so it’s definitely, just, different type of people, individuals, held to different type of platforms, and higher pedestals than others, which is understandable. And unfortunately I’m on that lower totem pole.”

Smart is absolutely correct about that. Here’s the play he referenced, which sure does look the same as the Embiid push.

But while Smart says he’s being singled out, the NBA’s position is that he’s doing it to himself. The league pointed to that in announcing his latest fine:

Smart’s fine was also based on his repeated acts of unsportsmanlike conduct during NBA games, including two prior incidents this season which have resulted in fines.

Smart’s personality and game would’ve made him a great fit for the beat-the-hell-out-of-each-other NBA in the 1980s. Unfortunately, this is 2019, where every incident is scrutinized frame by frame online and at league HQ. No one gets away with anything now.

Furthermore, his comments such as this probably won’t help his cause with referees or league disciplinarians:

“I’ll do it over again,” he said. “I’m going to protect myself at all times, especially if I don’t feel like I’m being protected out there like everybody else is. If you don’t want to clean it up, I’ll clean it up myself.”

As Red Auerbach famously said, he wanted instigators, not retaliators. Marcus needs to find a way to always be the former, never the latter, because every time he lets himself retaliate, he gets in hot water and hurts the team.

Maybe he’s starting to get there. Pushing Embiid was a better choice than smashing a picture frame.

Related — Globe: Marcus Smart feels unprotected on the court  | Herald: Celtics notebook: Smart still not backing down, but he knows he has to be smarter

He appeared in 38 games with Toronto this season before being traded to the Brooklyn Nets who wound up waiving the 28-year-old center.

Signing Monroe to a 10-day contract makes sense for both the Celtics and Monroe.

For Boston, it affords them the opportunity to rest Al Horford and not be overly concerned about the center position with Aron Baynes’ ankle sprain…

And for Monroe, he will get an opportunity to play and in doing so, potentially up his stock in the eyes of potential suitors this summer when he’s seeking to be signed during the free agency period.

The Celtics have also been experimenting with two-big lineups featuring Al Horford and Baynes, likely in preparation for a first-round series against the Indiana Pacers. If Monroe can provide anything resembling quality minutes, and especially if he can provide quality minutes alongside Horford, the Celtics might very well bring him back for the postseason. Boston has one open roster spot and essentially no playing time for any guards or wings available on the buyout market.

Surprise! Moose is back.

In his early NBA seasons, Monroe was one of those guys who always played well against the Celtics, but when he signed here he was neither consistent on offense nor a force on defense. Celtics fans weren’t sorry to see him go in the off-season.

Now, however, we’ve been pining for the Cs to fill their open roster spot with an experienced big, and Monroe is that. He did have a few good moments last spring, such as scoring in double figures twice in the Bucks series. And a few good moments are all Boston needs from him during this go-round. Even if he just plays spot minutes in the playoffs, he could a plus for the Celtics.

Out (as least for tonight):

Gordon Hayward, who is still progressing through the concussion protocol, Aron Baynes, who sprained his left ankle against the Philadelphia 76ers, and Al Horford, with what’s being called “left knee soreness” will all sit.

Horford’s absence is most likely a rest day framed around the knee, which has given him problems in the past….

The Celtics had a plan for resting guys, but that’s being tested now that the Celtics keep dealing with injuries. And with the third seed now all but a lock for the Sixers, Boston is fighting the Indiana Pacers for home court advantage in their seemingly inevitable first round playoff matchup.

“Unfortunately I think the rest is happening organically with injury,” Stevens said. “It doesn’t change necessarily our approach. We are very focused on trying to play well and be the best that we can be, but we’re not going to have everybody every night. You’ve got to qualify for the playoffs first, and then you get the best seed you can, and then you play whoever you’re dealt and you go from there. Every game is a monster at that point.”

Last year they were the Hospital Celtics; maybe this year they are the Relapse Celtics. There have been very few occasions this season when the entire roster was healthy. Then it hasn’t lasted more than a game before someone goes down.

Fortunately, Hayward, Horford and even Baynes reportedly might be available on Sunday.

Aron Baynes, who suffered what coach Brad Stevens described as a Grade-2 ankle sprain on Wednesday, appears to be on a quicker-than-expected road to recovery. The injury which often sidelines folks for at least a month, won’t keep Baynes out that long.

In fact, Stevens told reporters on Friday there’s a chance that Baynes could be available as early as Sunday’s game against the San Antonio Spurs…

An assortment of injuries have led to Baynes missing a career-high 29 games this season. And without Baynes, the Celtics are just 16-13 this season

Baynes has had the worst injury luck. If he gets back without an extended absence, that might be his first good fortune this season.

And, finally… Not a Hollywood ending

Sure, the Celtics haven’t done as well we expected this season, but how about those Lakers?!

If you’re like me, any troubles the Cs might have are much more tolerable when the hated Lakers and their fans are suffering. So, today, all is right within the basketball world, because the Lakers lost to the Nets last night and were officially eliminated from playoff contention FOR THE SIXTH STRAIGHT SEASON!

D’Angelo Russell and the Nets just officially eliminated the Lakers from the playoffs. ❄️🤫pic.twitter.com/Fz5dQRxivW

And with that, the Lakers are out of playoff contention. pic.twitter.com/6VQbYlzUPO

Globe: The Celtics are the most disappointing team this season, and other NBA thoughts

Boston Sports Journal: Projecting whether the Celtics receive the Grizzlies pick in 2019