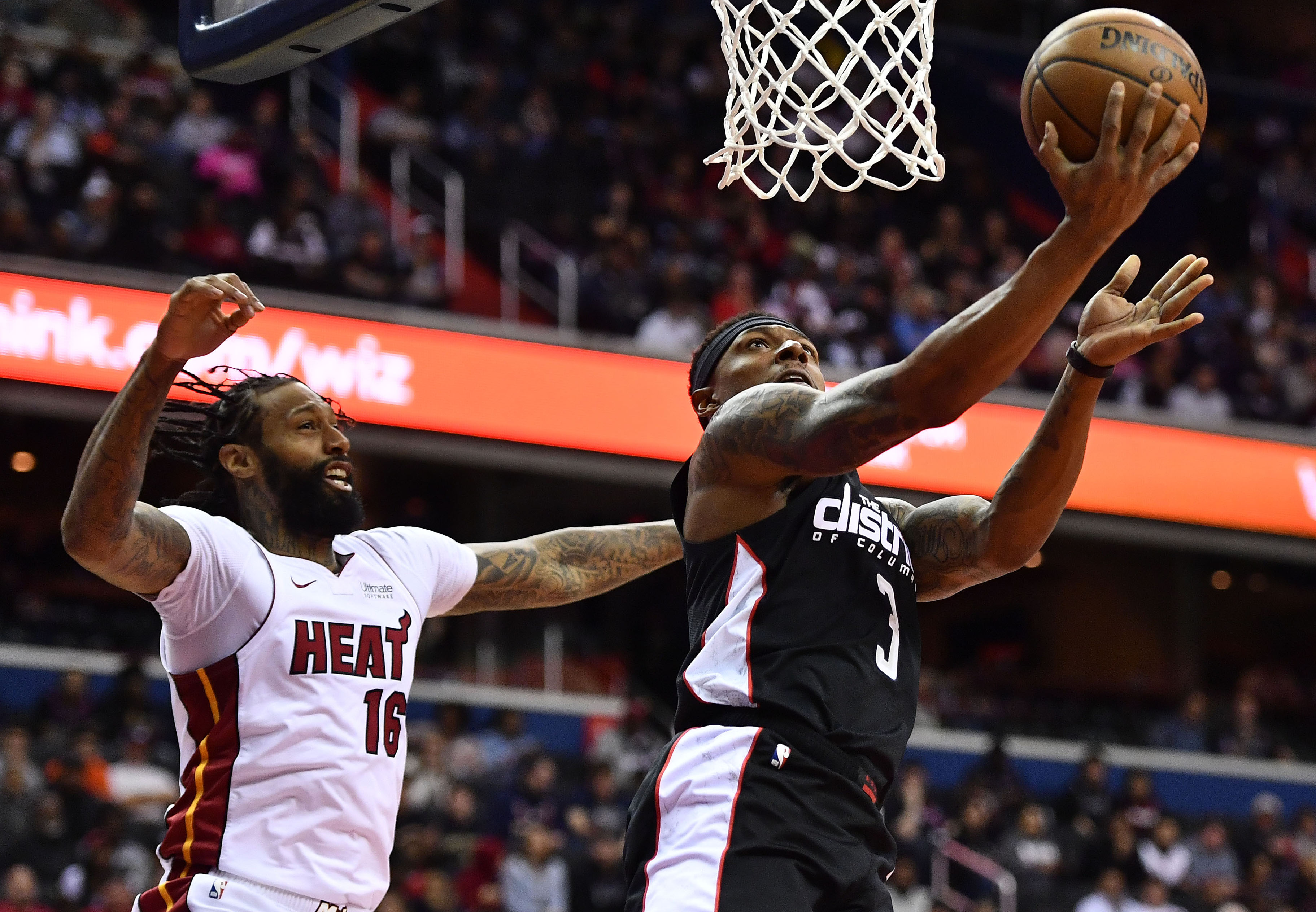 The Washington Wizards are as close to being eliminated from playoff contention as possible. At 30-44 and 6.5 games back of the Miami Heat after a Saturday night loss to Dwayne Wade and company, the Wizards tragic number is two with eight games to go. Washington’s official elimination could come on Tuesday with a Heat win over the Magic and a Lakers win over the Wizards. All the talk will be about Wade’s 20 points off the bench to win in his final game in D.C., but let’s talk about one of his understudies instead.

With his minutes somewhat limited at 34, Bradley Beal did not put up one of his recent All-NBA like performances. Heck, he didn’t even have an All-Star like performance. One week after receiving Eastern Conference Player of the Week honors, Beal’s team has lost four straight. On Saturday, Beal had a very average 16 points on 6-of-14 shooting, three rebounds, and three assists. For the week, the two-time All-Star averaged 20.8 points on 42.2 percent shooting and five assists.

“They pretty much beat us,” Beal put simply. “They beat us in every way possible – off the dribble, three balls, offensive rebounds, everything that we said that they were going to beat us in, they pretty much did. We felt good early on controlling the tempo. I think we kind of got out of that. They went on their run in the half, and they kind of took over from there. They were loading up defensively and making it tough for us on offense.”

Things started off poorly in a loss to the Utah Jazz on Monday that frustrated Beal before even more frustration two days later in Chicago. This week has made it exceedingly clear that there is no Robin to their current Batman, Batmo (not Bradley) Beal. Teams around the league now clearly understand that and are hounding Beal more than ever before. Despite that, Beal continues to make the correct basketball plays because he understands that he cannot do it all by himself regardless of the lesser talent around him.

Tomas Satoransky on Bradley Beal: "He really knows how to read a game and that he trusts in his teammates. … He made the right read. There were 3 or 2 guys on him and he saw the open guy and he made the pass, and I think that says a lot about how mature his game is now." pic.twitter.com/dhVlQjWY5B

For the second straight game, Bradley Beal has passed on a contested three-pointer that he describes as a “badass shot” to give his teammates (Thomas Bryant and Tomas Satoransky) a chance to tie the game late. When asked if he cares what the public perceives, he repeated, “I could[n’t] care less” four times.

“Why is it not a good pass? Because I should take the last pass, right? … Why shoot over three hands when you have a guy that’s open with no hands [contesting him]?,” Beal began. “My first instinct is to shoot it and I think every time I have been in that situation, I have gone up to shoot it and I end up passing out of it because I have had three hands in my face. That is a bad shot. Make or miss, that is a bad shot. If I have a teammate open, I am going to throw it to him 10 out of 10 times. That is just in my nature.”

That Beal is willing to make the correct basketball play is commendable, but it does nothing to change the likely future of another year with a similar cast of characters without John Wall. He only had two fourth-quarter shot attempts because teams are making it their defensive game plan to make someone else beat them. Barring the unlikely addition of a star this offseason, Beal will have to endure that for another 82 games next season, too.

“I did not have many opportunities,” Beal said. “The whole game plan is to take Brad away. That’s from the get-go, we all know that going into the game. We know that in here. The other team knows that. I can hear them on the bench saying it. It’s not rocket science. You take the ball out of my hand, force everybody else to make plays. They [Miami] did that.”