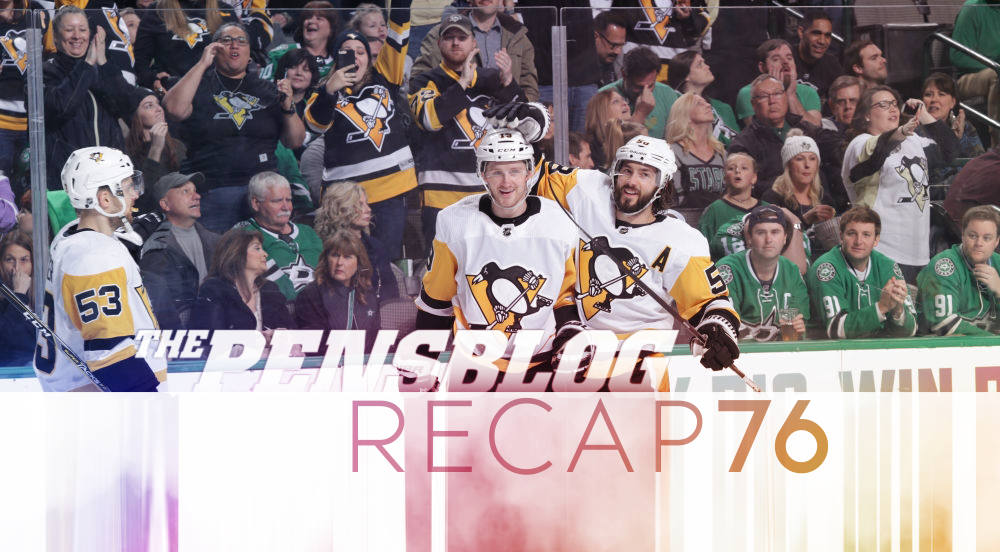 Note: Apologies for the delay on this one, gang.  Ya boy had life things going on.  As a result, we’re handling this bad boy a little differently.  Now presenting: A recap by the numbers.

For the fourth game in a row, the Penguins played into a 1 goal decision*, taking down the Dallas Stars in their home barn, finishing this one without blowing a late lead and having to go into extra innings, despite having to play the remaining 1:20 of the game at 6-on-4.

*Still impossible to call a shootout game a 1 goal game. It was a tie.  Fight me.

Matt Murray was brilliant (again), Phil Kessel racked up a pair of assists, but the story of the game was Jared McCann’s game winner, coming shorthanded at the 4:20 mark of the third period.

It doesn’t get much sweeter than that, folkssss.

This guy McCann score a lot of goals 😏 pic.twitter.com/fW9SEjo3Gj

pHiL kEsSeL sTiNkS aT eVeN sTrEnGtH

Tough angle? Not too tough for @jakenbake20. pic.twitter.com/M4MsK0xXGR

Caps and Islanders both won today, so the Pens remain in 3rd in the Metro as they finish up their road trip at MSG on Monday night.  Do it.  Go Pens.