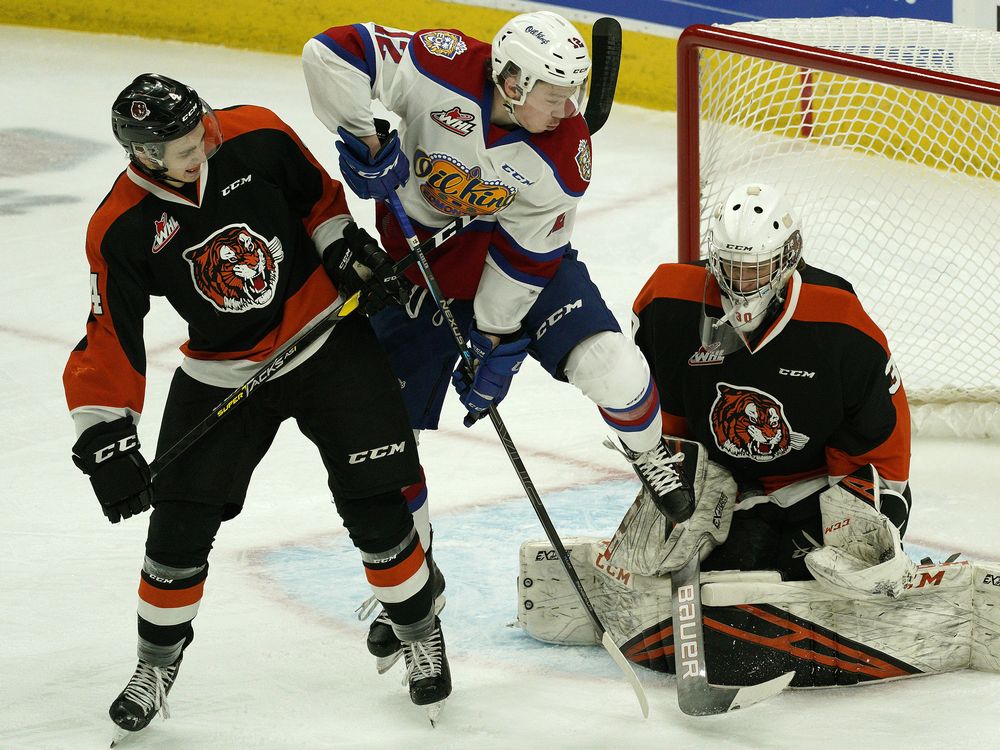 If you look up the term “tight playoff series” in a few weeks, you’re probably going to find a picture of this Medicine Hat-Edmonton series.

On Saturday night, the WHL playoffs at Rogers Place got going and Game 1 of the Tigers-Oil Kings series saw the visitors get a hard-fought 2-1 victory on the strength of 49 saves from Mads Sogaard and goals from James Hamblin and Hayden Ostir.

From the faceoff, the Oil Kings were on Sogaard as the shot totals midway through the first had Edmonton up 10-1 on the shot clock but things were all knotted up at zeroes going into the intermission.

Early in the 2nd, Medicine Hat would take the first penalty of the game but James Hamblin would open up the scoring shorthanded and show why he lead the visitors in scoring this season.

The Tigers would get another before the period came to an end thanks to Hayden Ostir beating Dylan Myskiw after a beautiful toe drag coming into the offensive zone. A defining silence soon fell over Rogers. The burst of 23 shots for Edmonton in the period still could not cut into the lead.

Medicine Hat would take the 2-0 lead into the locker room but in the third, the Oil Kings continued to throw everything they had at Sogaard and they’d be rewarded late. Josh Williams, the former Tiger would jump on a loose puck with 2:01 to go in the period to cut the lead in half and give some hope of forcing overtime.

A delay of game penalty to the Tigers’ Trevor Longo with just over a minute to go gave the Oil Kings and the crowd even more hope at extending this game. In the end, it just wasn’t meant to be as Medicine Hat would hold off the pressure until the clock read 0:00.

For Oil Kings head coach Brad Lauer he was glad to see his team get 50 shots but getting in front Mads Soggard is something he wants to see more of.

Dylan Myskiw had a lighter night than his counterpart in orange and black in  net but his effort was big to keep Edmonton in this game and his coach appreciated that effort.

“He made some saves, we had some breakdowns that were uncharacteristic of us. We gave up odd-man rushes and Dylan made those saves for us which you have to have in the playoffs. We have to tighten up defensively and limit those chances and have to be better offensively”.

With this being another one-goal game between the two teams, Tigers captain James Hamblin felt that the similarities of both sides are a big reason for why these are always close affairs.

“I think it’s how our teams kind of matchup that way. We both kind of play a fast game and it kind of just offsets, there’s good goaltending on both sides that keeps things close”.

Special teams play is something that Hamblin wants the whole team to be strong on and in Game 1 they made it a priority not only not giving up a goal while on the PK (Edmonton went 0/3 on the man advantage, while the Tigers would score shorthanded).

“That’s going to be important we really focus on having a good PK coming into this so we have to keep that going throughout the series”.