TOT - Braves Luck Out With Harang 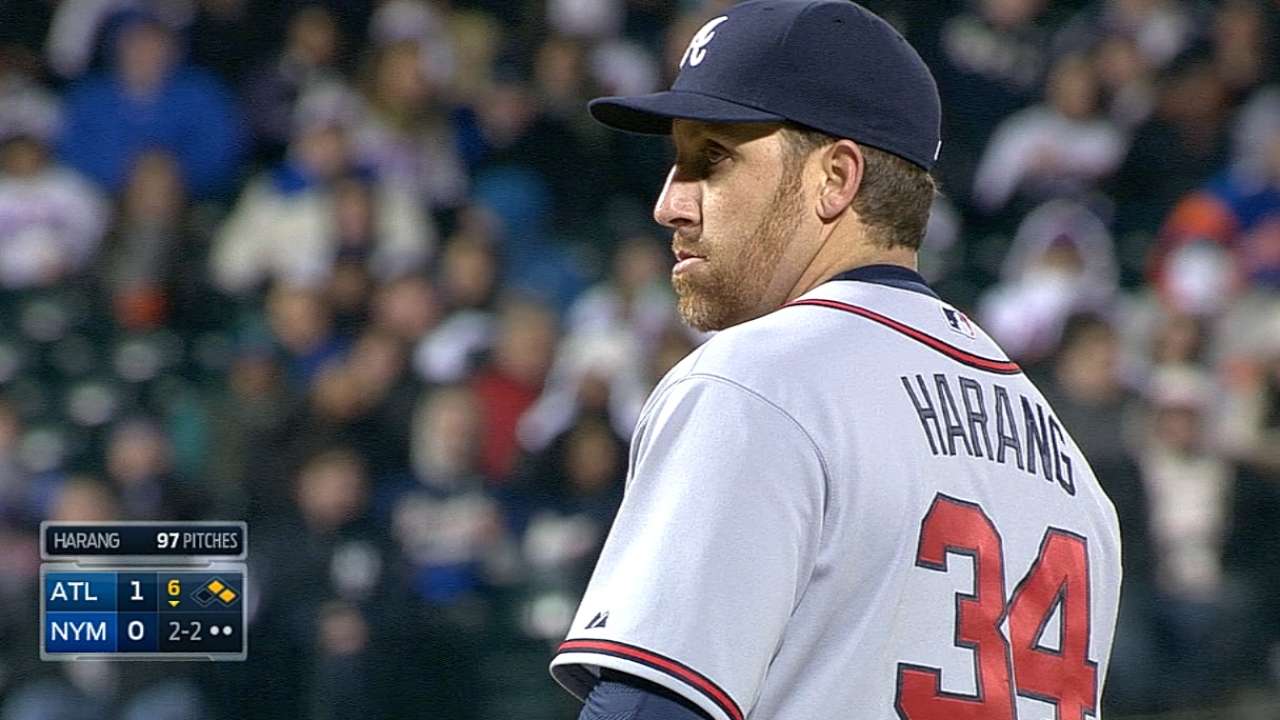 TOT - Braves Luck Out With Harang

Transaction of Today…March 24, 2014 – The Atlanta Braves signed Aaron Harang as a free agent.

Five years ago, the Atlanta Braves were searching. Their 2013 pitching staff was built on the young, promising arms of Julio Teheran, Mike Minor, and Kris Medlen. The Braves thought those three, plus Brandon Beachy, were ready to take over in 2014 and usher in a new era of Braves’ pitching. So sure they were of the young arms that they let Tim Hudson leave for free agency, signing the often-injured veteran, Gavin Floyd, to replace Hudson.

But then spring training happened. Medlen and Beachy went down. Minor and Floyd were also on the mend. Desperate, the Braves sacrificed a top draft choice to bring Ervin Santana on with a $14.1 million one-year deal. If that number sounds odd, it was the exact money Santana rejected when he refused a qualifying offer months before. With no leverage, the Braves had to give Santana that much to get him to sign.

Santana was only part of the fix, though. The Braves needed more. They had Freddy Garcia, the well-traveled veteran who became a bit of a cult hero during the previous fall’s playoffs. But Garcia struggled in camp and after the Braves released him, he would not throw another major league pitch. But getting rid of Garcia only meant the Braves needed more depth so on the same day they let Garcia go, they signed the durable righty, Aaron Harang.

Just a year-and-a-half younger than Garcia, Harang had thrown at least 111 innings for a decade and even took home some Cy Young votes in 2007, a year after leading the Senior Circuit in strikeouts. Yes, Aaron Harang has a strikeout title to his credit. But once he hit his 30’s, the strikeout rate fell, the walk rate increased, and, boy,  he could serve up some homers. While he remained durable and occasionally pretty good, he was no longer the same player who spent the greater part of eight seasons with the Reds. He had logged time with four different clubs over the previous three seasons – Padres, Dodgers, Mariners, and Mets.

That spring, Harang opened in the Cleveland Indians’ camp, trying to earn a spot in their rotation. But the Indians chose to go with Carlos Carrasco over Harang, choosing youth over a veteran piece. They also had Trevor Bauer and Josh Tomlin in the minors waiting for their turn. Harang did little to hurt his chances of making the Indians’ roster – he just got passed over for the guy with a brighter future. Harang asked for and was granted his release. Hours later, he signed with the Braves.

It was hardly an exciting move for Atlanta, whose fans were dreaming of another dynasty with the youthful Freddie Freeman, Jason Heyward, and Justin Upton in the lineup. But with such hits to their pitching depth, Frank Wren felt Harang was worth the gamble.

As it turned out…he was right.

Harang got off to a great start. He threw with better velocity and stuff than other teams had recently been able to get out of him. In his debut, when Braves fans still didn’t know who he was, he tossed 6.2 scoreless innings to out-dual Milwaukee’s Matt Garza. Over his first five starts, he allowed just three earned runs in 31.2 innings (0.85 ERA) with 33 strikeouts. He’d get blasted by the Marlins in his sixth start and his ERA would climb over 3 on May 22, but it never reached 4.

While his overall numbers don’t jump off the page, Harang was everything the Braves could have hoped for. He finished the sixth inning in 26-of-his-33 starts. He failed to finish the fifth just three times all year. He was even solid down the stretch as the Braves went to pieces. In his final four starts, Harang had a 1.63 ERA.

As far as low-cost buys go, the Braves got everything and more from their Harang signing. According to Fangraphs, he was worthy nearly 3 wins in 2014, or 2.9 fWAR to be exact. That’s his fourth-highest total and the best single-season total after his peak seasons of 2005-07. Put in terms of salary, Harang was worth $21.9 million in 2014. The Braves paid him about a million.

Harang’s resurgence was short-lived. He signed with the Phillies for 2015 and while he continued to log innings, his numbers took a significant step back with Philadelphia. His ERA and FIP both climbed into the 4.80s while his strikeout rate fell from 7.1 K/9 to 5.6. Once the season closed, he would never throw another professional pitch.

Sometimes, signing cast-offs end up huge moves. Often, they don’t. In Harang’s case, while the Braves failed to reach expectations in 2014, which set in motion both the firing of Frank Wren and the rebuild that followed, Harang was a positive in an otherwise negative year for the franchise.