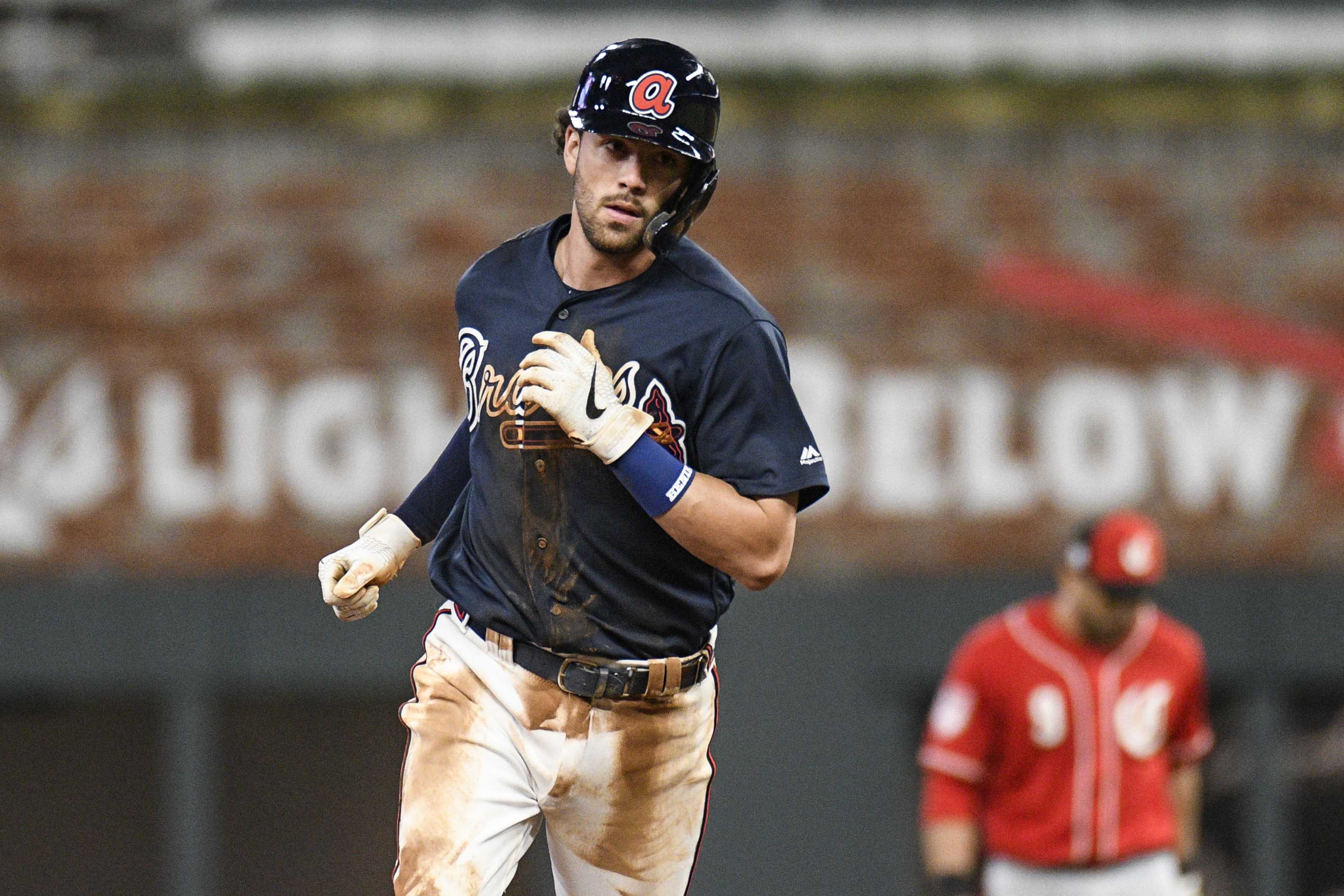 With the Florida part of their spring training over, the Braves opened SunTrust Park for 2019 with a win in exhibition action Monday. In a tune-up, Max Fried only went two innings and continued to impress this spring. He struck out a pair and walked one and looks set to open the year in the rotation. For how long is still unknown.

The Braves got to old nemesis Tanner Roark in the second. Leading off – this inning, at least – was Ronald Acuña Jr. and he walked on four straight. Nick Markakis took one more pitch, but also walked. Ozzie Albies, whose left-hand swing looks much better right now than it did last summer, singled in Acuña for the first run of the game. After Tyler Flowers, in midseason form, was hit-by-a-pitch, Matt Joyce plated a run on a groundout. A two-base error led to another run before a sacrifice fly made it 4-0. To finish the scoring, Josh Donaldson doubled in Dansby Swanson.

After the Braves nearly gave it all back, they added two more in the fourth and in the sixth, they witnessed a welcome sight that has not yet happened in a major league game that matters – an opposite field homer off the bat of Swanson.

Often talked about this spring a guy hitting the ball hard, but right at people, Swanson has been finding space lately and is now hitting .313 with a .827 OPS. If you’re looking for a sleeper pick capable of a four-win season out of nowhere, consider Swanson. With his defense, it’s quite possible.

On the pitching side of things, after Fried departed, Jonny Venters took over and, well, he’s had better games. To be fair, it’s highly doubtful he faces Eugenio Suarez during the regular season – at least in a close game. Suarez smacked a homer off Venters as part of a three-run barrage. Wes Parsons was next out of the pen and he gave up a pair of singles and an unearned run while working 1.2 with 2 K’s. Shane Carle finished off the fifth and worked a quiet sixth, retiring all four batters he faced with two K’s. Chad Sobotka got dinged for a Derek Dietrich homer before Thomas Burrows and Andres Santiago, both up from the minor league camp, finished things.

Injured Pitchers Working Their Way Back

The Braves will start 2019 with 40% of their projected rotation on the Injured List, but they don’t expect Kevin Gausman’s stay to be long. On Sunday, Kevin Gausman threw 78 pitches and worked into the fourth inning. It was a huge step in the right direction after right shoulder soreness was holding him back early in camp. It looks like he’ll be given the April 6 start against the Marlins provided he suffers no setbacks.

Less than two weeks later, the Braves are hopeful to have Mike Foltynewicz back. He threw batting practice on Sunday morning and reported no problems. He’ll be in line to start a minor league game on Friday and will need at least one more rehab start. He’s scheduled to start April 4 for Gwinnett if you’re in town. If all goes well, the Braves might get back their staff ace around April 10-15.

As for co-closer A.J. Minter, he threw an inning yesterday in a minor league spring game. Provided all is good, he’ll continue to work toward a season debut around the same time Gausman is activated. Both were placed on the IL and can return any time on or after April 4. Minter doesn’t seem like he’ll be activated that day and is also scheduled to pitch in the same Gwinnett game as Foltynewicz.

If you missed the news, the Braves set their rotation for the first few games to open 2019. Obviously, with Gausman and Foltynewicz on the mend, this wasn’t the planned rotation, but it’s a very intriguing one. On Thursday, Julio Teheran will start his sixth consecutive opener. After an off day, the Braves will close their road series with the Phillies by throwing a pair of rookie righties at Philly in Bryse Wilson and Kyle Wright. Atlanta wanted to avoid using their lefties against the heavily right-handed Philadelphia lineup.

On April 1, Sean Newcomb will start the home opener. After another off day, Teheran will get his second start of the season before Max Fried starts the finale to the Cubs series. That will put Gausman on target to start April 5 against the Marlins. Atlanta could bring Gausman back on the 5th if Fried was needed out of the bullpen before then, but that wouldn’t be the plan.

While the opening day roster hasn’t be officially set, we have a pretty good idea of how it will look.

Obviously, the pitching staff will start to see changes nearly immediately with the returns of injured pitchers. And the Braves could still be hunting for reinforcements that are available from outside-the-organization. But based on what we know right now, this is what the 25-man roster looks like.

Except for one thing – the Braves need a 40-man spot. After releasing Sam Freeman last week, the Braves opened one spot on their 40-man roster, but their projected opening day roster includes two (Tomlin and Joyce) that aren’t on their 40-man roster yet. Short of another move, Joyce is definitely on the roster. Tomlin’s spot is a little more up-in-the-air, but it seems likely he’ll be on the active roster when the season opens.

The Braves have already optioned eleven players from their 40-man roster. Four others are IL-bound. There is no obvious move here after the spring Wes Parsons has had. Most of the guys already optioned wouldn’t last long on waivers if the Braves try to sneak them off their 40-man. The only two that potentially could are lefty Grant Dayton and catcher Raffy Lopez. Dayton missed most of the last two years, but he looked dominant in a 25-game run with the Dodgers in 2016. But he is 31. That’s the same age as Lopez, the defensively-minded backstop the Braves picked up in the offseason to give them a third catcher they can move up-and-down who has options. But that was before the Braves added Alex Jackson to the 40-man roster.

One more option is to find room for Tomlin by designating Luke Jackson for assignment. Like most Braves fans, I have seen enough of Jackson, who long had the hype but not the results. Doing so would open a spot on the opening day roster, but the Braves could plug one of the players previously optioned like Dayton in that spot to open the year until Gausman was activated.

The Braves could also designate Adam Duvall for assignment. If released, he could save the Braves a couple of million. That doesn’t appear to be the preferred direction for the team considering their lack of outfield depth ready for a major league assignment should the Braves need one.

Yet another option was mentioned by Brian Snitker. He brought up the idea of keeping Austin Riley, but that seems far-fetched. However, keeping Alex Jackson to start the year isn’t that weird of an option. The Braves could then still designate Luke Jackson and open enough room for Tomlin and Joyce.

-Not only did the Marlins get rid of Derek Dietrich this offseason “for reasons,” they also just designated Dan Straily for assignment “for reasons.” The Braves’ projected win-loss record has improved as a result.

-When asked what he brings to the Braves, Josh Donaldson quite bluntly said, “Have you ever seen the back of my baseball card? That’s what I can bring.” My man.

-The Braves finish off spring training – FINALLY – today with a 1:10 game against the Reds. Kyle Wright will get a final tune-up for the regular season. Like Fried, he probably won’t be asked to pitch more than a couple of innings.