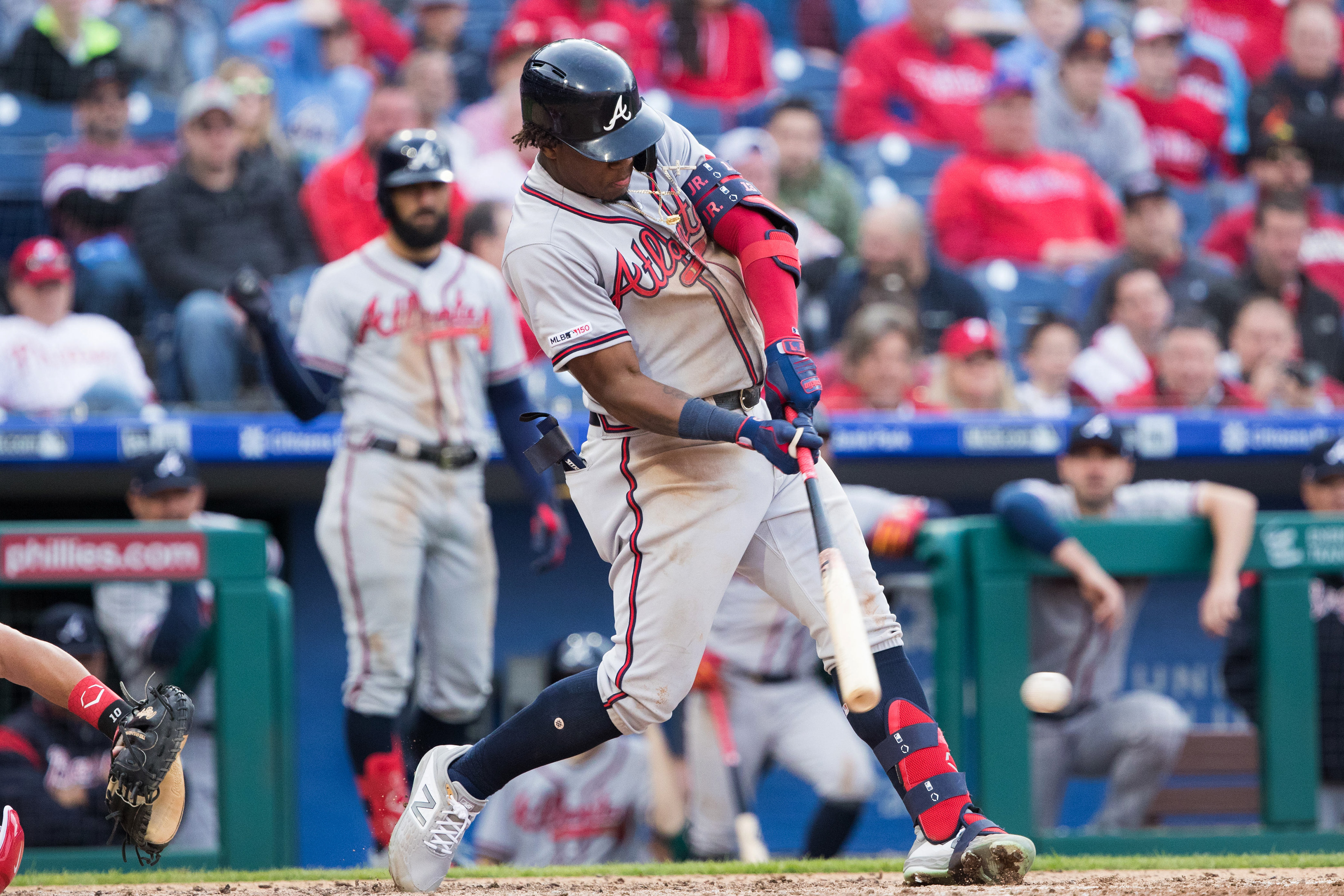 Following a winter where the Braves appeared unwilling to add depth to their bullpen, opening day played out like an all-too-familiar script. The starting pitching, this time via Julio Teheran, gave the team a chance. The hitting kept the game within striking distance. And then guys who arguably shouldn’t be in the majors blew things up in a major way.

Shane Carle and Luke Jackson’s dual implosions won’t stop the negative comments about why the Braves didn’t even sign some of the cheaper options that were available this winter, let alone get involved for a bigger piece. It also won’t quiet the calls for Craig Kimbrel to be signed and added to the team. Sure, Kimbrel wouldn’t have pitched the sixth when Maikel Franco hit a three-run homer off Carle. Nor would he have been in to pitch the seventh when Luke Jackson served up a Grand Slam to Rhys Hoskins, killing nearly any hope the Braves had of coming back. But pitchers like Kimbrel at the top of the depth chart push down better quality pitchers into those middle innings performances. The added depth also makes it more likely that, when injuries like A.J. Minter and Darren O’Day crop up, you’re not finding a way to bring guys like Jackson with you to opening day.

But because none of that happened, the Braves were simply overmatched by the Phillies Thursday and took the loss.

For all of the criticisms about Julio Teheran after he was named the opening day roster, he did impressively well against Philly’s stout lineup. Continuing with a change that he made during last year’s final few months, Teheran threw a steady diet of four-seamers and sliders. Part of that was due to Philadelphia’s right-hand heavy lineup but it was also because Teheran’s slider was straight filth yesterday, getting the kind of break you just love to see. Of the 20 swings on 44 sliders Teheran threw, a dozen swings were whiffs.

Teheran will need to throw more two-seamers, changes, and curves when he faces lineups with more lefties in them, but he was every bit Aaron Nola’s equal until a fourth inning where, ironically, it was his defense that let him down as opposed to what the Phillies’ defense did to their pitchers for most of 2018. Teheran gave up a homer to open the game to Andrew McCutchen, but retired the next nine until the fourth started. Jean Segura grounded to Dansby Swanson, who lost his footing on the throw and as it skipped up on Freddie Freeman, the Gold Glover couldn’t smother it. That put Segura on second and Brian McCann got him to third when he couldn’t corral a tough pitch. None of these defensive miscues were really glaring failures, but if a play or two were made – which happened quite frequently during 2018 – maybe the game turns out a little different.

With a runner on third and nobody out, Teheran faced nemesis Bryce Harper, Rhys Hoskins, and J.T Realmuto in a tie game. Teheran was masterful against Harper, letting the rival’s aggressiveness work against him. He never threw him a “strike.” He got a called strike one with McCann framing a pitch near the knees and then got strike two and strike three on whiffs on a pair of sliders. During the five-pitch at-bat, Harper saw all sliders. Hoskins got more variety in both pitch selection and location. It was one of Teheran’s rare two-seamers with a 3-2 count that got Hoskins looking. With Realmuto, Teheran fell behind 2-0 before evening the count. But the former Marlin laid off a pair of fastballs off the plate and took first base.

Teheran’s next two pitches weren’t bad. One was at the knees and the other was off the plate away. But both led to singles that plated a pair of runs. Teheran was a strike away from getting out of a jam not of his making. Now he was on the hook for a loss.

In the sixth, Carle walked Hoskins and Cesar Hernandez before getting lit up by Franco. After Matt Joyce cut the deficit to three with a two-run pinch-hit homer, Jackson’s abysmal seventh put the game out of reach. Jackson committed an error and walked a pair of batters (one intentional) before serving up a Grand Slam to Hoskins.

The Braves finished the game with seven hits, including a double off the bat of Dansby Swanson, who continues to look like a potential sleeper. But the Braves needed both more offensive execution and a better relievers to stay in this one. Neither favored them in the end.

It was just one game, but Ender Inciarte looked lost at the plate. He stared at a fastball that wasn’t borderline to open the season. He then got fooled on a curveball that was right down the middle of the zone to end his second at-bat and leadoff the third. In his third at-bat, he again stared at strike three and again, despite his repeated complaints to the umpire, the pitch wasn’t even borderline. His only at-bat that didn’t end in a strikeout came in the seventh. He grounded out to second.

It was his first three-strikeout game since last April 24. A notorious slow starter, Inciarte is set to receive the lion-share of leadoff opportunities this season despite many who believe the Braves should have left Ronald Acuña Jr. in that spot. Speaking of Acuña Jr., he did lead off twice in the game and in the second, put himself in scoring position with a walk and a steal. Nick Markakis followed with a single to plate the Braves’ first run.

As we get closer to revealing the opening day minor league rosters, the Braves made nine more cuts over the last few days. The biggest name among these cuts was Lucas Herbert. A former second rounder who was Kolby Allard’s battery mate in high school, Herbert had a major league quality glove behind home plate. Unfortunately, he didn’t have a passable bat when standing next to it. In 267 professional games, Herbert hit .213/.271/.326. He’ll pop a few homers and his glove will get him opportunities elsewhere, but the Braves felt it was time to move on.

Infielder Marcus Mooney also got cut. One of the John Coppolella specials as a reach in the tenth round who would sign for pennies so the Braves could spend their slot money on that round on better players, Mooney is a well-respected utility infielder with good leadership qualities. And yes, I mention those things because he can’t hit a lick.

Righty Matt Rowland’s release was sad for a lot of us that were hopeful he was going to be a sleeper. Picked in the 11th round back in 2016, injuries kept the Georgia-native from making his debut until the Danville season started last summer. He was wild, but often one of the more effective arms Danville had before running out of gas in August.

Other releases include pitchers Tanner Allison, John Curtis, Nick Pasquale, Kelvin Rodriguez, infielder Nick Shumpert, and outfielder Carlos Baerga Jr. A lefty out of Western Michigan, Allison looked bad in his only experience above rookie ball. Another lefty, Curtis is a mild surprise as he had overall decent numbers (3.03 ERA, 4.4 K/BB, 1.08 WHIP). His release likely means he didn’t impress this spring. Pasquale was an offseason pickup after spending his career with the Indians. His numbers with them weren’t noteworthy and he likely didn’t earn a spot on one of the Braves’ higher-level minor league squads. Rodriguez saved 13 games with Rome last year, but never stood out. Both Shumpert and Baerga are sons of former major league players. Shumpert has spent most of the last two seasons in Danville, where he played mostly infield and didn’t flash much offense. Baerga Jr. was his teammate last year and hit just .235/.318/.309.

He did get the win last June 20 against Pulaski. Funny enough, Rowland started and threw four innings that day before Allison replaced him to toss three innings as well. With the minor league rules of starting a runner on second, Baerga took the ball in the 10th and tossed two innings. He gave up an unearned run, but Shumpert scored to tie it in the 10th and in the 11th, Brett Langhorne singled in a run to win it.

If you missed the news, with the Braves needing a 40-man spot with both Josh Tomlin and Matt Joyce making the roster, the Braves designated Raffy Lopez for assignment. Picked up on waivers this offseason to give the team a catcher with options that they could shuffle up from the minors when needed, Lopez was a thoroughly unexciting catcher who is known for defense over anything. With Alex Jackson holding his own this spring and continuing to improve behind the plate, carrying four catchers on the 40-man roster was a bit much.

-Max Fried tossed an inning after the game was put out of reach yesterday. It was quick, easy, and further begs the question as to why Shane Carle or Luke Jackson was used first. The relief appearance won’t altar plans to use Fried as the starter in the season’s sixth game on April 4 against the Cubs.

-The Braves won’t be in action today. They’ll play tomorrow in the second-of-three against the Phils. It’ll be another afternoon start with first pitch scheduled for 4:05 for reasons that I honestly cannot explain. Bryse Wilson is scheduled to face Nick Pivetta.