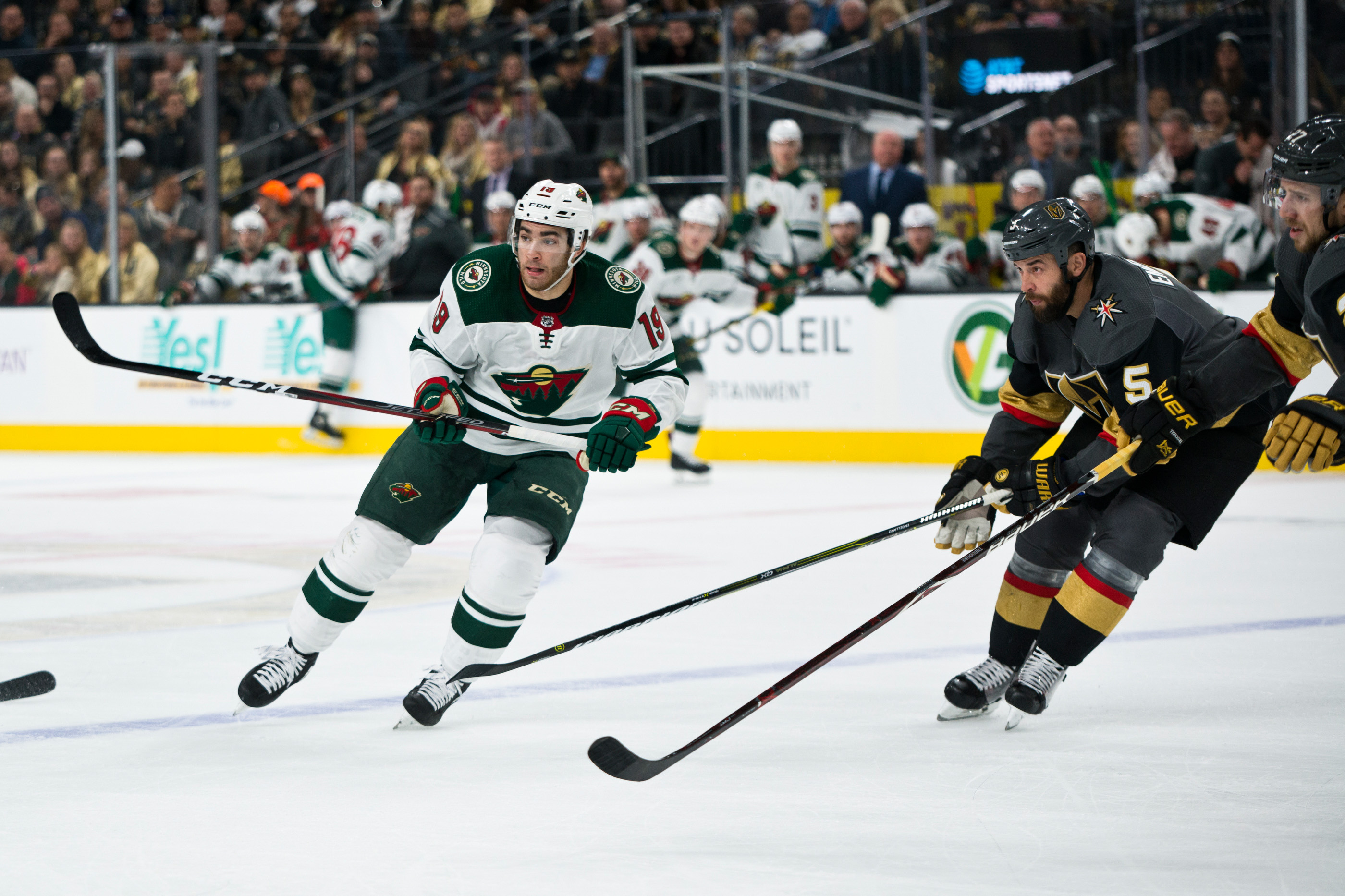 The uncomfortable wait.  Whether its waiting for a job interview or at the doctor’s office.  For some its more time to spend on their phones but not me.  I don’t do much on my phone to pretend and so I’m more likely to pick through the magazines or just enjoy people watching (without being creepy).  In the case of the Minnesota Wild, they’ve had to sit back and wait as their opponents play more games and gain more distance from them in the race for a wildcard spot.  Are the players nervously scoreboard watching like some Wild fans, or are they more like me not worrying about things that they cannot control.

Meanwhile, the Vegas Golden Knights aren’t really waiting as they sit in 3rd place in the Pacific Division.  The Golden Knights, off their Cinderella run a season ago they are hoping to go on another long ride through the playoffs.  Can the Wild earn a victory in Sin City or will they scheduling tee-times after this game?

1st Period Thoughts:  Both clubs traded scoring chances in the opening minute as Jason Zucker ripped a shot that didn’t miss by much and then Vegas had a chance of their own as Mark Stone blasted a slap shot that never made it on goal.  The crowd had quite a few Wild and North Stars jerseys in attendance and they’d be treated to the 1st goal as Greg Pateryn scored his first goal as a member of the Wild as he sent a shot parallel with the goal line to bank it off Malcolm Subban and in.  1-0 Wild.  The Wild were being pesky through the neutral zone, creating turnovers with good positioning but it didn’t always result in scoring chances as Eric Staal picked up a puck and had a 2-on-1 but instead of skating in and forcing the issue he glided and the opportunity was lost.  Minnesota’s ‘kid’ line of Luke Kunin, Joel Eriksson Ek and Jordan Greenway made their presence felt as Kunin skated from behind the goal and out front for a quick chance that was steered aside by Subban.  The Golden Knights tried to press for the equalizer but Devan Dubnyk was seeing the puck well and he was able to glove a shot taken by Max Pacioretty.  The ‘kid line’ continued to cause havoc as Kunin and Greenway had a nice flurry near the Vegas net and it was Greenway firing a shot from the slot with a host of bodies out front but Subban was able to make the save and the puck would be cleared out of danger.  A bad turnover by Ryan Suter in his own zone resulted in a chance by Stone that was snagged by the glove of Dubnyk.  A few minutes later another turnover by Greenway in the neutral zone as Paul Stastny tried to carry the puck into the Wild zone, but Greenway managed to poke the puck away to Suter who then lost it again which turned into a Pacioretty shot on goal.  Vegas got Minnesota scrambling around its own zone, as they set up Reilly Smith for a one-timer that was blocked away by Dubnyk.  Minnesota would counter attack with its 4th line and a shot on goal by Brad Hunt seemed to give Subban trouble and the Wild crashed the net and Marcus Foligno tapped the loose puck into the goal but the officials claimed they had blown the play dead before he did so.  A few minutes later Zucker would nearly cash in on a backhander that rang off the left post, but as the play continued Deryk Engelland would trip up Zucker giving Minnesota a power play.  The Wild wasted little time on the power play to add to their lead as Zucker wired a shot from the slot that went top shelf on Subban.  2-0 Wild.  The Vegas crowd, which seemed to only be about half of the arena seemed stunned as their team trailed by two going into the 1st intermission.

2nd Period Thoughts:  Jonathan Marchessault would take a penalty early in the 2nd period giving Minnesota a chance to extend its lead.  The Wild power play moved the puck well setting up Jared Spurgeon for a one-timer that was blocked on its way to the goal.  Minnesota continued to try to set up the one-timer as Kevin Fiala‘s slapper was blocked by Brayden McNabb that sent him in pain and skating back to his bench as the puck went out of play.  The Wild would come up empty on the power play but they were able to continue to give Vegas fits in their own end.  The Golden Knights would swarm in the Wild zone and it looked like they may have scored as Stone tried to wrap it around the goal but at the last moment Dubnyk swept it away before it completely crossed the goal line.  The home crowd wasn’t happy, but it was a terrific desperation stop by the Wild goalie.  Minnesota would try go back on the attack and with some hustle and effort along the wall the Wild would set up Pateryn for a shot from the point that was easily steered aside by Subban.  The Wild seemed to just be more determined on puck battles and the 4th line would draw a penalty as McNabb would haul down J.T. Brown after he broke free and was about to go on a breakaway.  On the initial draw on the power play by Jason Zucker who had to fill in after Eric Staal got kicked out the initial faceoff, Zucker would win a battle for the puck and work it down low.  Minnesota would then crash the net and after a flurry near the Vegas net, it was Fiala pouncing on the loose puck to give the Wild a 3-0 lead to a loud cheer from the thousands of visiting Minnesota fans.  The Golden Knights would try to go on the attack and their top line would cause some chaos in the offensive zone drawing a hooking penalty on Eriksson Ek.  The penalty would prove costly as the Golden Knights moved the puck efficiently and they steadily wore the Wild penalty killers out before they were able to cash in as Stastny tapped in a goal from in close.  3-1 Wild.  Minnesota would try to respond and Matt Read‘s shot gave Subban a little trouble but he’d hold on for the save and the Wild still had to feel pretty good holding onto a two-goal lead going into the 2nd intermission.

3rd Period Thoughts:  As the third period started, we learned that Colorado beat Arizona in overtime.  If the Wild manage to hold on to this game, the 2 points don’t really gain much. Early in the period.  Kunin would draw a holding penalty that would send Jon Merrill to the penalty box.  Fiala got an early scoring chance, only saved by a stretch by Subban.  Staal would also get cross checked from behind, that would slowly send him back to the bench.  As far as Wild power plays go, this has certainly been a better one, with decent possession and legit scoring chances.  Yet the quick strike ability of the Golden Knights was evident as Stone nearly was able to wrap it by a sprawling Dubnyk who stretched out just enough to force him to miss wide as he was slashed by Fiala giving Vegas another power play.  Minnesota’s penalty killers did a decent job of getting sticks and bodies into shooting lanes and were able to force the Golden Knights to settle for shots from the perimeter.  The Wild would get a big kill.  But Vegas would go back to work and they’d cut the lead to one as pass out front by Pacioretty was tapped in by Stastny who was open on the back door as Suter just glided by unconcerned.  3-2 Wild with Vegas feeling very much in the game.  The Golden Knights kept applying pressure as Marchessault tried to tuck in a shot near the right post on a wrap around, that was nearly pounced on by William Karlsson.  Minnesota seemed to want to just play rope-a-dope by keeping shifts short and dumping pucks deep and forcing the Golden Knights to waste time moving the puck the full length of the ice.  Vegas was activating its defense and challenging hard whenever the Wild tried to leave their zone.  As the Golden Knights pulled Subban for an extra attacker with two minutes, the Wild were paying the price to keep pucks from reaching Dubnyk as Brown blocked Colin Miller slap shot that left him reeling and skating back to the Minnesota bench in pain.  Dubnyk would make a few sprawling saves in the closing seconds to give the Wild a big win and earn a tiny bit of a reprieve at keeping their fleeting playoff hopes alive with a 3-2 win.

C – Alexander Khovanov (Moncton, QMJHL) ~ the skilled Russian, who just signed a 3-year, entry-level deal with the Wild had 2 assists in Moncton’s 4-3 loss to Baie-Comeau on Tuesday.  He had another 2 helpers the next night in the Wildcats’ 3-2 win over the Drakkar.  Khovanov has a goal, 5 points, 10 PIM’s and is a -1 in 4 playoff games.

C – Damien Giroux (Saginaw, OHL) ~ Saginaw’s captain earned 1st star honors for scoring a shorthanded goal on 3 shots in the Spirit’s 6-1 win over Sarnia on Tuesday night.  Giroux has 3 goals, 4 points, and is a +3 in 3 playoff games.

RW – Shawn Boudrias (Cape Breton, QMJHL) ~ the rugged winger had 2 assists on 2 shots in the Screaming Eagles’ 6-2 win over Charlottetown on Wednesday.  He then followed it up with a goal in Cape Bretons’ 4-3 win over the Islanders on Friday.  Boudrias has a goal and two helpers in 5 playoff games.

LW – Kirill Kaprizov (CSKA Moscow) ~ the skilled winger had an assist on one shot in CSKA Moscow’s 2-1 win over SKA St. Petersburg on Thursday.  Kaprizov has 2 goals, 9 points, 2 PIM’s and is a +4 in 9 games.