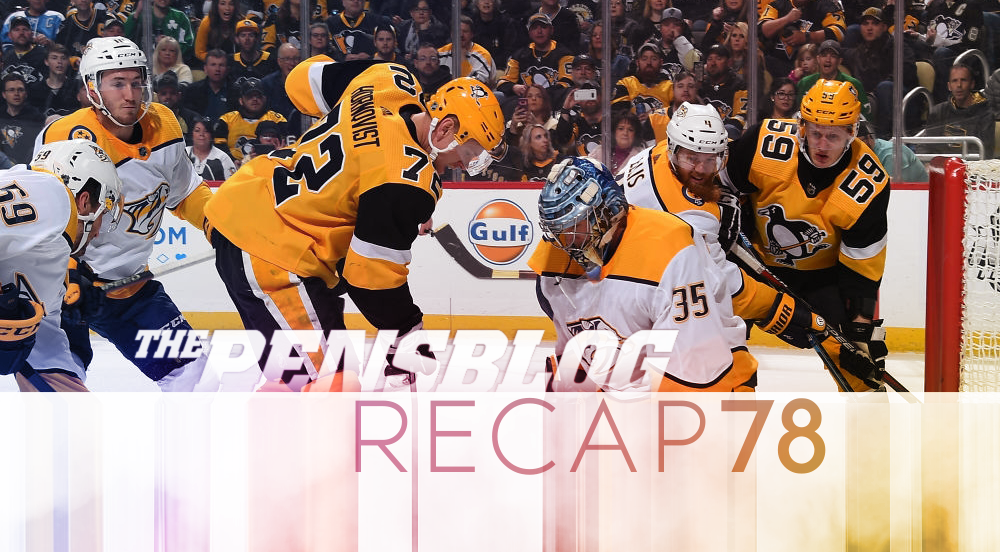 Someone somewhere once coined the phrase “All good things must come to an end.”

In one sense, he/she was probably right.  For example, the Penguins 3 game win streak probably did have to end some time.  They probably weren’t going to win their last 5 games and win 16 straight in the playoffs.

In another sense, that person sucks shit.

Because you could say that last night, the Penguins really didn’t deserve to have their win streak snapped.  They played well through the first 40 minutes, had their share of chances, but just couldn’t beat Pekka Rinne until it was already 3-0 with about a minute left.

It was also probably the first loss of the season where the entire fanbase collectively shrugged and acknowledged simultaneously that shit happens sometimes.

They call that progress.

Welcome back to the lineup, Olli! pic.twitter.com/VMJSJeXuD6

The Zach Trotman Era was officially done and dusted as Olli Maatta was activated from IR and claimed a spot in the lineup next to Brian Dumoulin as the lone change in the lineup that topped the Rangers at MSG on Monday night.  Neither Malkin nor Letang were fit enough to come back too, but whatever.  Murr with the nod between the pipes.

Just 95 seconds into the game, it ended before it even had a chance to get started.

Preds got going with a controlled breakout, had their stretch pass deflected into the Pens corner to the right of Murray, and there was Nick Bonino coming back to haunt his old club, getting in on the forecheck with Craig Smith on Hornqvist and Dumoulin.  One of those two is not a defenseman and it showed here, eventually ending with the Preds winning two separate board battles to kick it up to Matt Irwin at the point.

Smith and Jarnkrok worked their way into the shooting lane, but it was Smith getting the deflection down to take a wicked bounce off the ice and beating Murr blocker side.  Dream start for the Preds.

Murr was not having any of that bounce.  It was like when you went roller skating when you were 12 and the goth kids would launch bouncy balls from the arcade upstairs onto the rink.

Pens were wasted until a shift with about 12 minutes left with a big dick swinging past your knees shift from the Simon-Bjugstad-Hornqvist line, who did just about everything except score.

Simon may literally have covered every single inch of the offensive zone here. Unreal shift. pic.twitter.com/oqQhoZskwq

Pens kept buzzing and with 7:31 left, they got their first PP of the night after Forsberg went off for something.  The PP looked deadly, Crosby was the trigger man, Hornqvist was doing his thing in front, but they just couldn’t find a way through Rinne on any of the 7 shots or 4 scoring chances they generated there or the rest of the period.

Not to be outshined, Murr was sharp too, but not 22-Saves-In-The-First-Period sharp.  Just Make-A-Timely-Save-In-The-Final-30-Seconds sharp.

Just 21 seconds into the period, Arvidsson had a nice chance turned aside by Murr and, as he chased down his rebound, he tripped up Money Bag to put the Pens on their 2nd PP of the night.  This one…was not good.  Just couldn’t ever get set up.

They’d get another chance five minutes later after Sissons went off for hooking Bjugstad, but wouldn’t do dick with that one either.

Both teams proceeded to trade shit off, but neither Rinne nor Murray were there for the taking.

Then, because it’s the NHL and a single team isn’t allowed 4 straight powerplays, the Preds got away with a crosscheck on Cullen before heading on the PP with 3:51 left after Blueger got hit with an interference call at the blueline.

You knew it was coming and you knew what the end result was always going to be.

The PK was fine for the first half of it and after a clearance, got pushed back with a version of their own stupid neutral zone drop pass.  They shipped it in for a footrace between Smith and Jack Johnson, with the latter winning the race but throwing it back up the boards to no one.

The Pens were stretched and he had all the time in the world to dig it out, suck Cullen in, then rim it back over to Arvidsson to play catch with Subban before firing one on net.

This is where you can really see where Gudbranson’s skating may come back to haunt him at some point.  He reads and shifts over as Arvidsson moves it to Subban, but when the return pass comes over, he lumbers and chops to try to get in the shooting lane.  Effectively, this prevents him from being able to get in any sort of shot-blocking stature.

The result: Arvidsson uses him as a screen to wire a shot through him and by Murr.  All comes back to this: if you’re screening your goalie, you better block the shot.  Otherwise, if he can’t see it, he’s not saving it either in this league or any league.

Spoiler alert: This one wouldn’t end 3-2.

Shutdown city for the Perds, but ended up nearly making it 3-0 in the first 6 minutes, only to run into Murray on either immediate side of another Sissons hooking penalty.

Then Murr follows it up with a big time breakaway save to keep the Pens from giving up their 876th shorty this year. This is numerically accurate. pic.twitter.com/nDCXkt0iIQ

Of course, the Preds killed it off, then went back to their own PP 2.5 minutes later for some phantom interference call on the Best Boy Dom to run the clock down two more minutes.

Five minutes after Dom got out of the box, though, the Preds basically sealed it up with another slightly fortuitous goal.

Here, Johnson goes back to start the play after the Preds dumped it back into the zone.  He tries to hit a stretch pass, but Guentzel was sealed off on the near wall by Ekholm.  Low percentage pass, to be fair.

Ekholm had his head up and sent it right back down the Pens throats with a quick up to Smith to skate in, stop up once Guentzel caught him, and find Subban on the far side of the ice.  Four Penguins and 2 Preds in the offensive zone here when Smith goes to make the pass and they’re all watching Smith, ignoring Subban streaking up the right wing.

Subban comes in and instead of trying to control the bouncing puck, just steps into one.  No chance for Murr here either.

Watch this shot come in.  The way that it’s fluttering and moving and just drops once it bypasses Johnson’s stick defies physics as we know it today.

But with Murr out of the net for the extra skater, the Pens were finally able to break Rinne’s shutout bid with some nice perimeter player, dogged puck chasing, a quick and shifty Money Bag zone entry and Phil! setting up Bjugstad for the quick NHL 94 goal out from the back of the net.

Pens are now sitting in 3rd in the Metro and are left with a 4 point cushion over the trailing Hurricanes, who play their game in hand today against the Flyers before traveling to PPG to play the Pens on Sunday.  Can’t think of a better day than the Sabbath to start another win streak.