Your Morning Dump… Where the Celtics' postseason has already begun 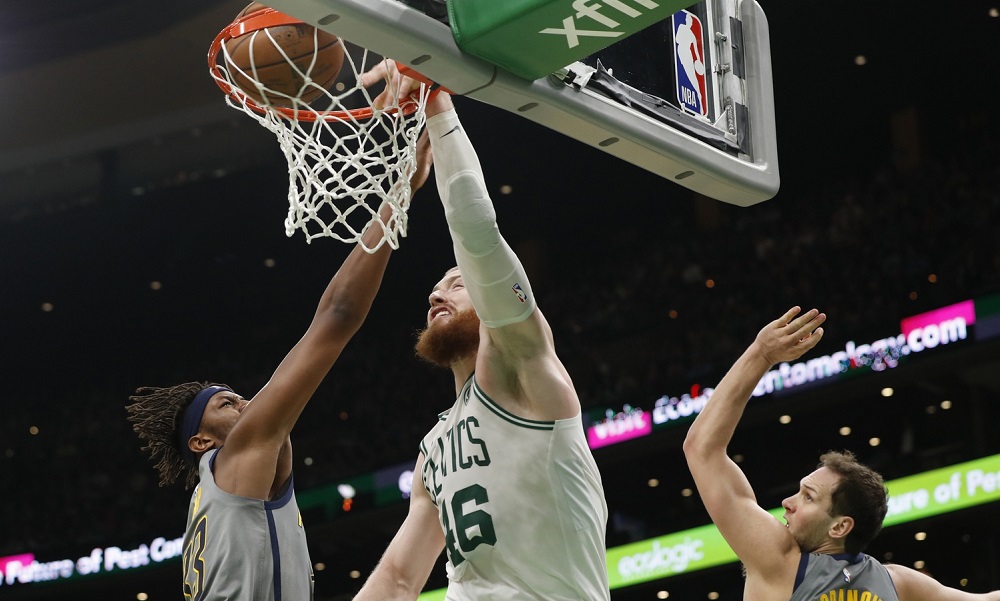 Your Morning Dump… Where the Celtics' postseason has already begun

It was clear that this one felt good for Irving and the Celtics.

And that should be your big takeaway from Boston’s 114-112 win over the Pacers: The Celtics won a high-stakes game with a playoff-like feel against a quality opponent they’ll see a LOT of the new four weeks, all while putting themselves in the rare position to actually make their lives a teeny tiny bit easier in the postseason.

It was far from perfect but, much like in the playoffs, a win is a win is a win. This was one of those gotta-have-it type games that the Celtics haven’t always shown up for this season. And, after trading haymakers with these gritty-as-hell Pacers, coach Brad Stevens put the ball in Irving’s hands in the final seconds and let him win it.

“Kind of like a pre-feel-out game, if you want to call it for the playoffs, but homecourt advantage was at stake and, I know we see them again one more time, so we’ll see how that goes and just keep on getting better for the rest of the regular season,” said Irving, who scored a game-high 30 points on 11-of-22 shooting.

NBC Sports Boston: For a change, the Celtics make it a little easier on themselves

The Celtics’ remaining schedule includes the Miami Heat twice, the Washington Wizards, Orlando Magic, Brooklyn Nets and a final matchup with the Pacers. Orlando, Miami and Brooklyn are all tangled at the bottom of the Eastern Conference playoff race and will be highly motivated.

The Pacers, meanwhile, face the Detroit Pistons twice as well as the Atlanta Hawks, Nets, Magic and Celtics. The Pistons are in the mix with the Nets and Magic.

That did feel good, didn’t it?

In this crazy, roller-coaster season, the Celtics have tended to play down to lesser teams but rise to the occasion against the best. With playoff seeding at stake against their sure-to-be first-round playoff opponents, this time the Cs did not disappoint.

We’ve been putting all our hope into the Celts somehow finding their groove once the postseason arrives. The win last night keeps that flame flickering. A loss would’ve been devastating, not just to the standings, but to the psyche. Thankfully, the team – and the home crowd – delivered an energizing performance. It was enough to make fans cautiously optimistic.

Boston is now fourth in the East, crawling ahead of Indiana via the head-to-head tiebreaker (the Celts are 2-1 vs. the Pacers so far). All six remaining games should have a playoff atmosphere – none more so than the matchup at Indiana next Friday. The Cs must finish strong to maintain that slim margin for homecourt advantage, because the tenacious Pacers will be tough to beat even if four games are scheduled in Boston.

At 6 o’clock tonight in Brooklyn, the Celts will face a hungry Nets team that’s clinging to a playoff spot. It’s possible some Celtics might have a “load management” night on the back-to-back. Shorthanded or not, Boston has to win, because at this point, it’s as if the postseason has already begun.

On Page 2: A change for the better

And it all worked out. Kyrie was the star with 30 points and the last-second game-winner, but just as important were the contributions of All of Australia.

Baynes would ultimately play 32:47 critical minutes during which he seemed to be at the center of almost everything positive for the Boston Celtics.

“He had to,” Brad Stevens told reporters after the game. “We needed him to. And again, we just haven’t had him and Al (Horford) healthy for very much of the year, so it’s been hard to play them together.”

This was the first glimpse of what a playoff rotation might look like. Baynes and Horford started each half and finished the game together, and spent most of the rest of it subbing in and out for one another. They combined for some monster front-line production: 32 points on 14-for-25 shooting, 20 rebounds, four blocks, four assists, and just one turnover.

The offensive numbers are fine, but Boston’s defensive rating during the final 7:16 of the game where Baynes and Horford shared the floor was a ridiculous 86.7.

Baynes not only made an impact at both ends, he even, for a change, put someone else on a poster.

Horford (19 points, 7 rebounds, 3 blocks) and Jaylen Brown (16 points on 7-10 shooting) stood out too, as did Smart, who only scored 6 points but – as usual – was pretty much the most noticeable Celtic out there, with 4 steals and numerous impact plays.

When everyone is healthy and motivated, these Celtics can beat anyone. Last night, the injury list was empty, and the playoff preview inspired everyone just as expected. Pretty sure we can expect 100% from Baynes and Smart at all times in the postseason.

Related – MassLive: Marcus Smart directs Boston Celtics defense from bench: ’just try to give us the best advantage that we can have’

The Athletic: Aron Baynes nailing his audition for a big playoff role

And, finally… Stay away from our squad

"You have to figure out how to touch the right buttons to make them want to be the best versions of themselves."

Kobe Bryant had some thoughts on what Celtics star Kyrie Irving needs to do to get the most out of the pieces around him.https://t.co/SwQkhBcxCD pic.twitter.com/937bSTolZl

I must’ve missed all the people who said Kobe made his teammates better.

MassLive: Boston Celtics’ Robert Williams on his back injury: ‘I couldn’t roll over. That’s why I was so still’

Chuck already wrote about this, but here are more links about the accused racist fan:

MassLive: Boston Celtics say they were unable to verify use of racially offensive language from fan directed at DeMarcus Cousins  |  Brad Stevens on Boston Celtics fan banned for racist comments: ‘It’s disappointing,’ and other pregame notes  |  Kyrie Irving says he hasn’t experienced racism in Boston, but ‘hearing about it, it’s a little saddening’

Globe: Why a fan got just a 2-year ban after allegedly calling DeMarcus Cousins the n-word