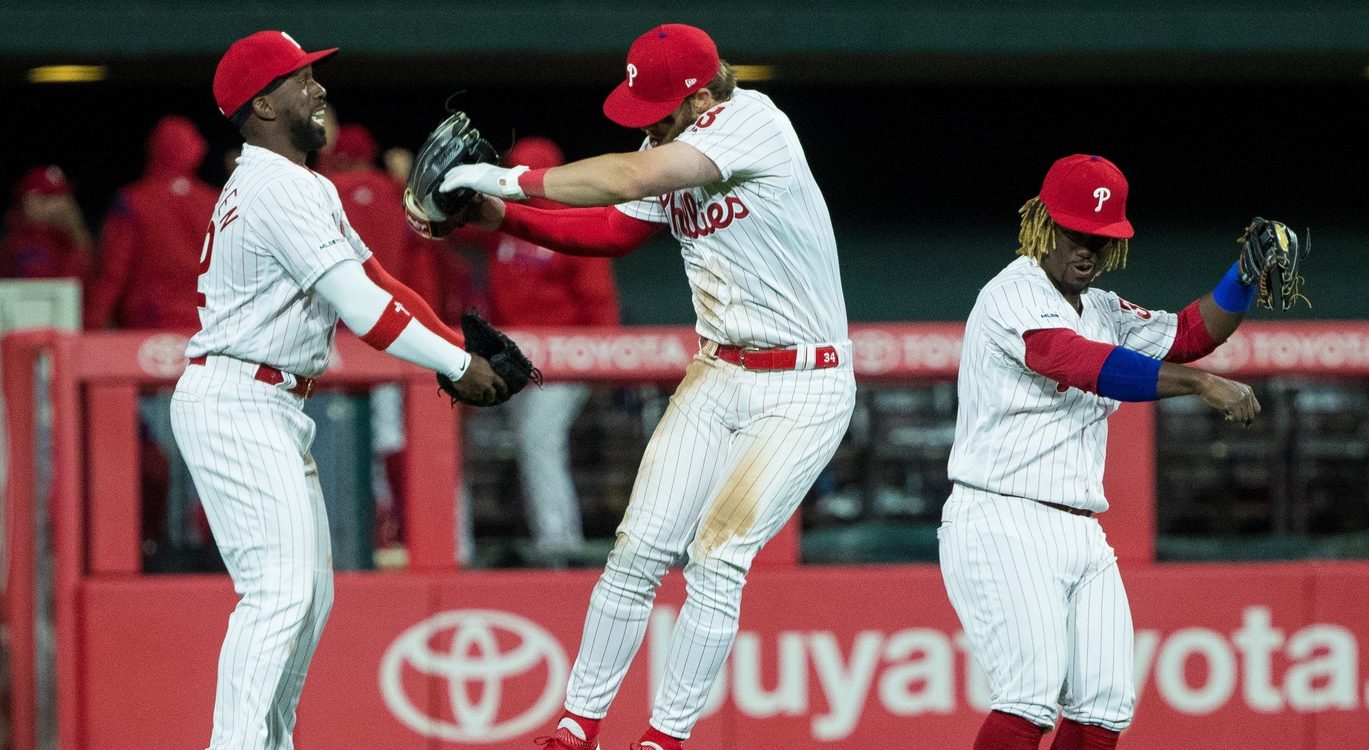 After two days of offensive fireworks, things slowed down just a little bit on Sunday night with the temperatures dropping and the winds picking up energy throughout Citizens Bank Park. But another mighty swing from Bryce Harper and the second home run of the year by Andrew McCutchen provided some jolts of offense to back a solid enough of a season debut for Jake Arrieta as the Phillies completed a season-opening three-game sweep of the Atlanta Braves with a 5-1 victory.

Arrieta didn’t have a tremendous outing, but he did manage to tie the Braves down by allowing just one run over six innings of work. It was tough at times as the Braves didn’t knock the ball around much but did draw walks off Arrieta (six, to be precise). The lone run scored by Atlanta came on a passed ball charged to catcher J.T. Realmuto as it appeared he and Arrieta had crossed their signals on a pitch in the top of the third inning. Arrieta made up for the six walks by striking out six batters, allowing three hits and managing to jam batters into outs on balls that couldn’t get out of the infield. It wasn’t great, but it was more than enough on Sunday night.

The Phillies evened the score in the bottom of the third inning when McCutchen led off the inning with his second home run of the season.

It was hard not to like what McCutchen brought to the table in his first series with the Phillies this season. A pair of home runs and good plate discipline with the ability to work counts and draw walks is what makes him the perfect player to lead off in this lineup. It’s a small sample size, as anything from the first series of the season is, but that is an encouraging sign.

The Phillies really shined with their approach at the plate in the fifth inning with runners on the bases leaving little room for error for Braves starter Kyle Wright. Wright struggled with his command and forced in a go-ahead run when he walked Rhys Hoskins immediately after walking Harper. Earlier in the inning, Wright was engaged in quite a battle with Arrieta, who saw 11 pitches at the plate before lining out to center. It was reminiscent of Brett Myers in the 2008 NLDS against CC Sabathia, although Arrieta couldn’t quite draw the walk.

With a 3-1 lead in the seventh inning, Harper led off the inning with his second home run of the season, giving him two home runs in two days against the Braves. Once again, the stadium was electrified with the homer, although there was no curtain call on this particular night. But Alex Rodriguez loved it in the ESPN broadcast booth.

Tensions rose a little on the very next pitch of the game, one that got away from Braves reliever Shane Carle and came up and in on Hoskins, who was none too happy about the pitch. Carle was promptly ejected by the home plate umpire.

I’m not 100 percent convinced the pitch was intentional because pitchers for both teams were struggling with command all night long in the elements and the Atlanta relievers were having some issues all series, which was to be expected coming in. The situation certainly looks suspicious, and Hoskins had taken some close calls already in the series, so you can understand why he would be a bit peeved about taking that pitch in the arm the way he did.

There was no retaliation from the Phillies as they simply took care of business on the scoreboard and closed the game out without any problems. Get the win, go home and get ready for the next series in D.C. against the Nationals (who scored their first win of the year with a walk-off win against the Mets earlier on Sunday).

The Phillies are now the only undefeated team left in baseball after one full weekend of regular season play. That’s pretty neat. The Phillies will obviously lose a game at some point, perhaps even in this next series as Harper returns to the nation’s capital to face his old teammates. But for now, the Phillies maintain control of the NL East. Let’s see how long they can keep it that way.