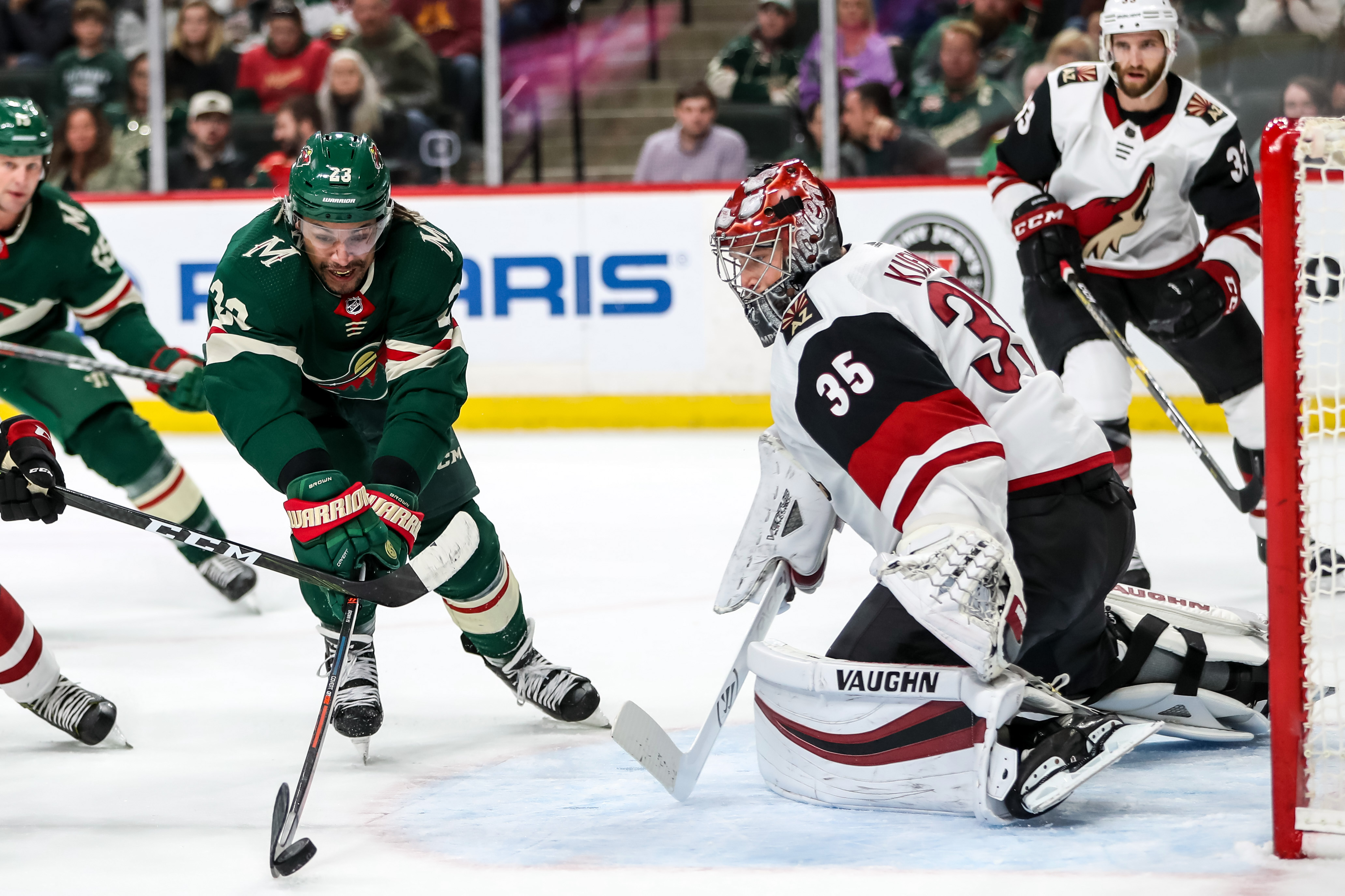 The Minnesota Wild are in someways a lot like the band Nickelback.  Some people love the band, and feel its mainstream country / rock style is great while others use it as a punchline.  The Wild are equally polarizing between fans who take ownership at its word and believe its simply a few ‘tweaks’ away from being a contender and others who feel this team should’ve used the trade deadline literally sell off any player that wasn’t bolted down with a no movement / no trade clause and start over again.  Instead the Wild got sort of a compromise, where they sold off some pieces but frustrating over the return didn’t include a stockpile of draft picks.  Some of those moves have worked out reasonably well while others make just about any fan of the team scowl in resentment.  So even with a victory over Vegas, the Wild probably only delayed the inevitable considering they’re still 4-points out of the last wildcard spot.

The Arizona Coyotes are just one point ahead of the Wild in the Western Conference wildcard race, but are also most likely are needing help in order to sneak in.  So two desperate clubs, needing two points and not wanting to give the other an inch.  This could very well make for the most playoff-like game these two clubs play this season.  Who will prevail?

1st Period Thoughts:  The Coyotes were buzzing early to start the game and the Wild seemed to struggle with Arizona’s effort and energy.  The ice was distinctly tilted in the Minnesota end as Derek Stepan and Michael Grabner had good chances from in close.  Minnesota would then go to work with its 2nd line and they came dangerously close to cashing in as Victor Rask set up Kevin Fiala for a chance from the high slot that rang off the post.  The line kept working hard and it was Fiala with another shot to the short side that was fought off by Darcy Kuemper.  The Wild would get called for ‘too many men’ as Nick Cousins got in the way of Jordan Greenway was trying to skate back to the Wild bench.  On the power play the Coyotes moved the puck quickly to set up Clayton Keller with a quick shot that was gloved and held onto by Devan Dubnyk.  Minnesota penalty killers did a good job at applying pressure to the puck carrier and they were able to get a big kill.  After a few minutes of chasing the puck around the neutral zone, the Wild would have the next great scoring chance as Ryan Donato raced into the Coyote’s zone.  He’d let go of a shot that Kuemper struggled with and then Donato gathered up his rebound and he’d skate behind the goal and then send a pass out front to Luke Kunin who seemed to pounce on it but he wasn’t able to get it by Arizona goalie.  Arizona would strike first as the Coyotes won a draw in the Wild zone a quick shot by Oliver Ekman-Larsson seemed to be controlled by Dubnyk but Alex Galchenyuk would jam at the puck and slide it through 5-hole.  1-0 Coyotes.  Minnesota tried to answer back as the 4th line had an opportunity in close as J.T. Brown was stopped on the doorstep by Kuemper.  A blocked shot near the Wild blueline turned into a 3-on-1 rush the other way but at the last moment Niklas Hjalmarsson slashed Jason Zucker before he could pull the trigger on a shot but he’d still draw penalty in the process.  On the power play the Wild held the zone well but were not able to generate anything beyond a few shots from the perimeter that were fairly straight forward for Kuemper to stop and Minnesota would come up empty with the man advantage.  After the failed power play Minnesota kept pressing for the equalizer as Donato had a few more shots on goal.  Moments after that Greenway would race into the zone and fire a shot on goal that Kuemper kicked out and Rask pounced on the rebound but the Coyotes’ netminder was able to clean up his own mess.  The Wild would take an interference penalty late as Ryan Suter leveled Josh Archibald with a hit even though he didn’t have the puck and give Arizona a power play with about 30 seconds left in the period.

2nd Period Thoughts:  Minnesota did a good job of a shadowing Ekman-Larsson and forcing a few turnovers and getting the kill.  The Wild then tried to counter attack and Eric Fehr forced a turnover in the Arizona end but instead of having a Marcus Foligno to pass to he collided with Jordan Oesterle and he laid on the ice for being hurt.  Richard Panik would later run into Devan Dubnyk and the two players would joust a bit as the play continued to move to Arizona’s end of the ice but the play would be blown dead.  Even though Dubnyk held onto Panik after the initial goaltender interference penalty was called there was no call on the Wild goalie.  On the power play, the Wild moved the puck around but no one seemed to want to pull the trigger.  Rask had two open looks but passed the puck to no one twice and another power play came up empty.  The Coyotes would try to add to their lead and after a scramble in the Wild zone they nearly cashed in as Lawson Crouse‘s bid just was battled away at the last minute by a flailing play by Dubnyk.  Minnesota would be given another power play as Jason Demers tripped up Zucker.  On the power play the Wild’s penchant for overpassing and overhandling the puck squander another opportunity ont the man advantage.  After the failed power play the Wild started to swarm in the Coyotes’ zone and Matt Read was set up for chance from in close that was deflected aside by Hjalmarsson.  Minnesota continued to attack and Donato had a chance off the rush but Kuemper was able to come up with the saves time after time.  A failed attempt to push a puck up the ice by Suter would have Arizona quickly transition the puck up to Archibald who moved in and lifted a forehand shot up and over the shoulder of Dubnyk.  2-0 Coyotes with less than a minute left in the period and they had to be feeling very confident going into the 3rd.  Soft goal given up by Dubnyk.

3rd Period Thoughts:  The Wild would try to press the attack early but while they usually were able to get the initial shot on goal, they were often physically unable to pounce on the rebounds.  Credit to Kuemper for making the initial saves and then Minnesota just seemed to be unable to win the battle for the loose pucks.  Arizona was content to cross the red line and dump pucks deep and then make it difficult for the Wild to carry the puck up the ice.  As the minutes went by, the Wild’s effort seemed to fade like a team that was resigned to its fate.  Especially from the older veteran players, they appeared to be going through the motions.  The game would open up a bit as Minnesota was a little more desperate trying to create scoring chances but all too often the Wild was unable to really create a dangerous opportunity but it would lead them to a counter attack by the Coyotes.  Dubnyk had to make a stop on a shot from Vinnie Hinostroza after a failed Wild rush.  As the Wild kept activating its defense in search of a goal, the Coyotes would counter attack and Kunin was compelled to hook Clayton Keller to prevent a scoring chance.  On the power play, the Coyotes were content to kill time off the clock.  Minnesota’s penalty kill was aggressive and they would create a turnover in the Arizona end as Eric Staal tracked down a puck but as he made a move towards the net he’d tried to pass the puck to a crashing Ryan Suter that never reached the defenseman and a golden chance to get a quality shot on goal never materialized.  Minnesota would get the kill, and now the Wild would have about 5:30 left to try to tie the game.  Arizona was hustling well and contesting any attempt to bring the puck up the ice and forcing Minnesota to dump it in and the Wild just didn’t have quite enough speed to win those races.  The Coyotes had more team speed and they were using it well, stepping up in open ice to deliver hits and slowing Minnesota down.  The Wild set up a few good chances late but Kuemper was up to the task.  With the season on the line, the Wild pulled Dubnyk just under the 3-minute mark for an extra attacker.  The Coyotes were not being cute with the puck and taking any chance to send the puck back into the Wild end even if it meant icing the puck.  Fiala would lose a puck battle near the wall and the Coyotes would work the puck up to Archibald who collected his 2nd goal of the night on an empty netter.  3-0 Arizona.  The Wild would pull Dubnyk again with about 40 seconds left.  The Coyotes were protecting the middle of the ice well and Minnesota couldn’t even manage to generate a shot on goal in the closing seconds and Hinostroza would bury another empty net goal as the Wild fell 4-0 and their playoff hopes are pretty much gone.  Good riddance.

C – Sam Hentges (St. Cloud State, NCHC) ~ the freshman season came to a dramatic and unfortunate end as the top-seeded Huskies were bounced from the NCAA tournament by #4 seeded American International on Friday.  The former Totino-Grace star had 2 shots on goal in the loss.  Hentges finishes his freshman season with 10 goals, 20 points, 24 PIM’s and was a +14 in 37 games.

LW – Brandon Duhaime (Providence, NCHC) ~ the speedy winger chipped in two assists on the Friars’ impressive 6-3 win over top-seeded Minnesota State on Saturday.  The junior winger has 10 goals, 31 points, 53 PIM’s and is a +15 in 40 games.