The greatest Eagles fan contest ever invented —the MACH 10 Draft Challenge— is now in its 13th year. As usual, it sounds simple enough—pick 10 names of players you think the Eagles will draft (April 27, 28 and 29).

But man is it hard to win! Hitting on two or three names is usually the max success rate, and probably good enough to win. Take it from me, who has rarely gotten even one hit over the past twelve MACH challenges.

This year the co-author of the contest, GK Brizer, has decreed you can begin submitting your entry as early as April 1. You do so by dropping your list of 10 names in the Comments section below.

In previous years the rule of thumb issued from the mammoth paw of fellow co-author Great Fat JB99 was “10 names, 10 days before the draft”… But this year, in JB99’s absence, GK Brizer has extended the entry period to include ballots submitted as early as NOW.

Thus we record for posterity here the very first ballot of 2019 MACHers, submitted by Palm Feathers of Sarasota, Florida on April 1:

T-Boner, BlueBug, and South Philly Ben soon followed with their ballots. EYE will keep records including timestamps as the MACH 10 deadline (April 27, midnight EST) winds its way down to the finish.

PAST WINNERS of the MACH 10 Trophy:

Making predictions is a tough business, as the MACH 10 Challenge teaches us.

Vegas has spoken and it looks like the Philadelphia Eagles are the team to beat in the NFC East.

Sportsbook operator CG Technology, which provides the lines for eight sportsbooks in Las Vegas, has posted their initial win total futures for next season and it paints a pretty rosy picture for the Eagles. CG Technology has set the Eagles over/under at 9.5 wins this season, which is the most in the NFC East, tied for third in the conference and tied for sixth in the NFL.

Here’s how it all breaks down: 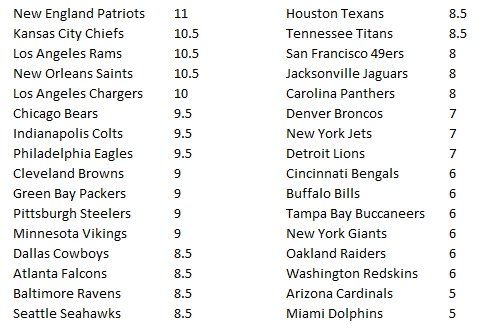