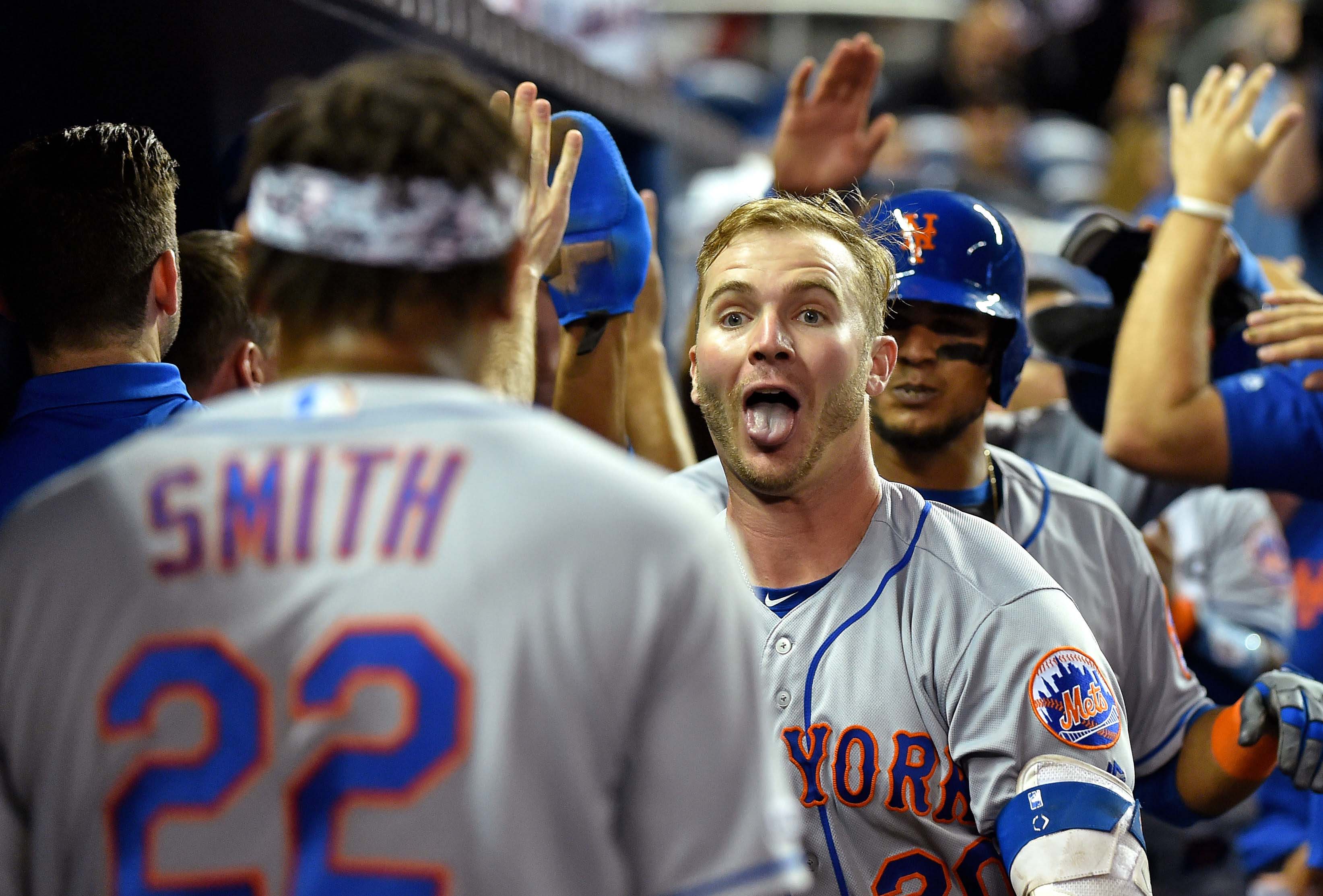 I guess it’s obvious that the Mets made a pretty good decision to bring Pete Alonso to the big club … service time be damned.

The Mets turned what was shaping up to be another in a long line of heartbreaking losses in Miami into a 7-3 victory which was still hairy at the end, but thanks to Alonso’s first major league home run, it was memorable in a good way. Maybe it’s because the park no longer looks like a bag of Tropical flavored Skittles and was been modernized to look more like Wild Berry.

Not to say there weren’t bumps along the way. The bottom of the sixth was not J.D. Davis’ inning. A possible 5-4-3 double play was turned into a force play as Davis lollipopped the throw to Robinson Cano, giving Cano no shot at turning two (it was Davis’ second rainbow to second of the game, giving pause as to whether he had a “Jon Lester throw to first” type of mental block.) Then, inexcusably, Davis let a long hop go by him on a throw from Juan Lagares which was there in plenty of time to nail the runner going to third on a Brian Anderson single. The error, unfairly, was charged to Lagares.

Starlin Castro followed up with an RBI single to make it 3-2 to knock Steven Matz out of the game. And while you can definitely say that Matz wasn’t given any favors by his defense, it’s exactly the kind of situation where Matz has to bear down and get an out there. First off, Matz’s career numbers coming into this game are stark when it comes to the difference between OPS against with the bases empty and OPS vs when runners are on … 92 vs 112. Compared to his baseball refernce comps, that’s a wide difference. Compared to Sid Fernandez (96/108), who I always compare him to when it comes to how they handle baserunners, that’s stark. Matz gets into his own head and doesn’t handle adversity well. And sorry, if we’re going to build up these guys as a “historic rotation” like we’ve done for years, then we need to expect more from them, bad defense or not.

Okay, that’s it for the ranting. From that point on the Mets drove the wheel. Juan Lagares hit an oppo taco to tie the game to lead off the seventh. Then in the ninth after Dom Smith pinch hit single and a hit batsman, Amed Rosario singled to the right side to give the Mets the lead. Then, it was Alonso’s majestic 444 foot blast to tie it.

Edwin Diaz cam in for the ninth with a four run lead, which I can only assume was because Diaz was already warming up when the score was 3-3 or 4-3 in the ninth and pitchers hate it when you warm them up and not bring them into the game. (I believe Mickey Callaway called that a “dry hump”?) Diaz loaded the bases but got out of it with the four run lead intact for the books. Diaz is taking my advice of saving his meltdowns for the Marlins and Pirates.

The Mets are in good shape at 3-1, a place they might not be in if it wasn’t for the presence of Alonso. But the rest of the club is super, too.

Did you see this last night?

Enough memories in one picture to give you indigestion.