Parise and the Wild Rout Winnipeg 5-1 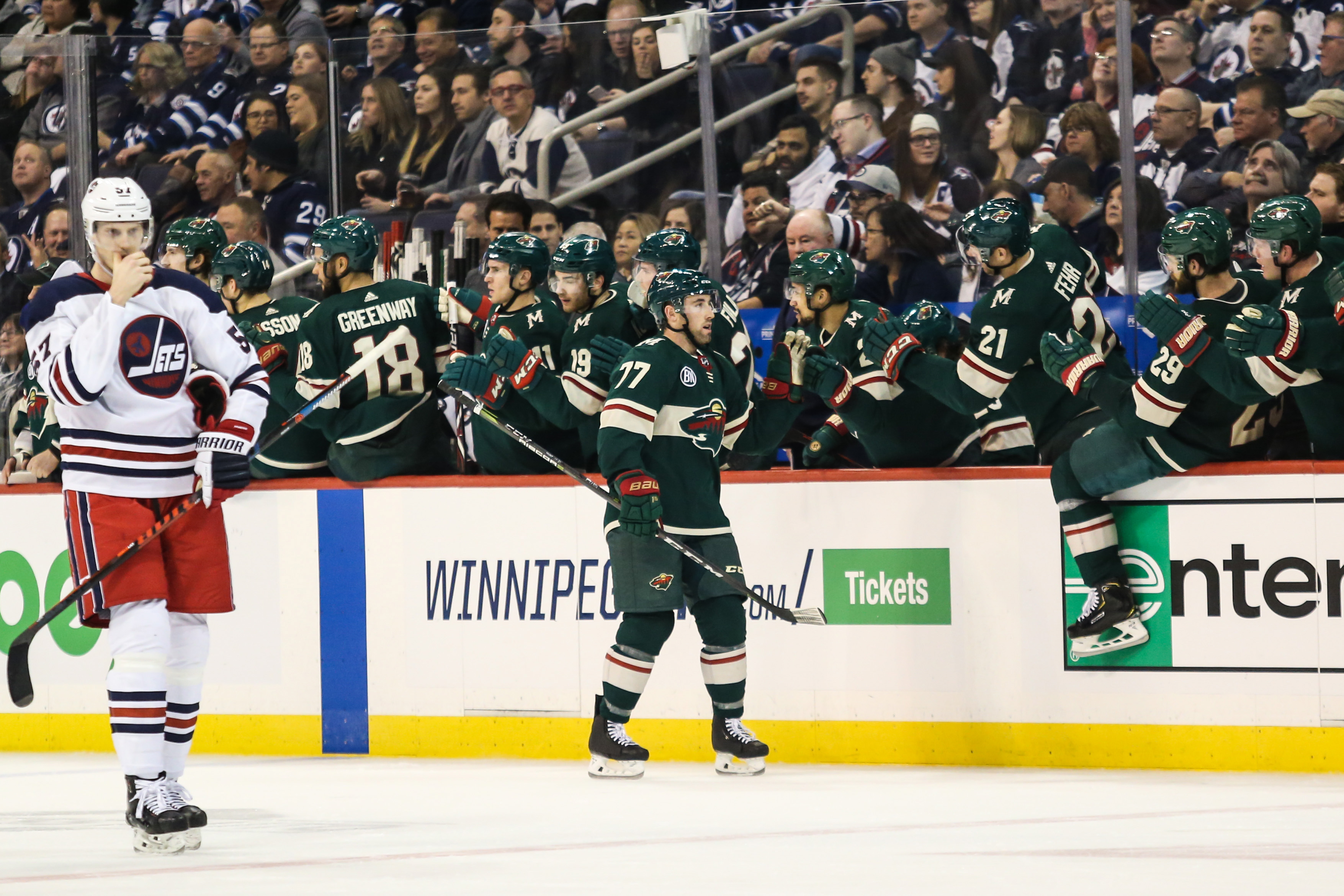 Parise and the Wild Rout Winnipeg 5-1

Minnesota is all too familiar with disappointment.  Just ask most of their college hockey fans as they only had one team (Minnesota-Duluth) advance out of three #1 seeds to make it to the NCAA Frozen Four.  So the slow burn of the Minnesota Wild’s season doesn’t really have the same kind of sting as watching your team lose to #16 ranked American International.  Still it makes for a miserable last few games that even if the Wild win them all there is a pretty good chance they still won’t qualify for the post season.

The Winnipeg Jets are trying to keep their top spot in the Central Division with the Nashville Predators right on their heels.  I am curious to see how hard this team battles after their loss to Arizona on Sunday.  Will they play like a desperate team that wants to make it or will they kind of only go 3/4ths of the way to total commitment the way they did against the Coyotes?  Can the Wild earn another win over Jets?

1st Period Thoughts:  The first few minutes were calculated and reserved as the Wild and the Jets were wary of making a big mistake.  Not many shots were being sent on goal, and the Wild could not seem to create much in the way of time and space.  J.T. Brown would trip up Mathieu Perreault giving the Jets a power play.  On the power play, the Jets were able to set up a few big blasts from the point by Ben Chiarot and Dustin Byfuglien who tried to use traffic to their advantage but Devan Dubnyk was seeing the puck well and able to make the saves.  Minnesota would get the big early kill but they still struggled to get much going offensively.  Yet, sometimes its not always about quantity as Zach Parise would deflect a puck that popped up into the air and the puck would flutter down and off Eric Comrie‘s back and in.  1-0 Wild on the lucky bounce.  After the unusual goal, the Wild was taking any chance it could to send shots on goal.  The strategy would pay off as a nice play by Parise to sweep a puck over the stick of Chiarot and then Staal tapped a pass back to Parise who got off a quick shot that beat Comrie.  2-0 Wild.  The Jets tried to answer back as Byfuglien sent a shot from just above the right faceoff dot that rang off the outside of the right post.  Minnesota would get caught pinching with its defense and Mark Schiefele would appear to have a step on the Wild defense but was thwarted by a diving play by Luke Kunin.  The Wild’s shoot first mentality continued to pay off as Victor Rask who skated in off the wing and he’d beat Comrie with a shot that snuck just between him and the left post.  3-0 Wild.  Decent first period for the Wild, although its hard to ignore this wasn’t against one of their top two goaltenders.

2nd Period Thoughts:  The 2nd period had Minnesota trying to withstand a bit of a push from the Winnipeg Jets.  The Wild were quick to try to come back and help out defensively, which meant Dubnyk only had to make the initial save and the team was quick to carry away any rebound before it could turn into a second chance opportunity.  Minnesota wasn’t taking too many chances to attack offensively even though the Jets were now activating their defense hoping to at least get a goal and swing some momentum their way.  Before they could do that the Wild would strike first as Joel Eriksson Ek would rip a shot off the rush that Comrie couldn’t stop.  4-0 Wild.  Minnesota had another tremendous chance when Jason Zucker got free for a breakaway but Comrie made a fine save to keep his team only down by four.  The Wild would earn a power play as J.T. Brown was tripped up by Dustin Byfuglien who yelled at the official after the call.  On the power play, it was all Jets who applied tons of pressure to the Wild’s puck carriers and they’d create a shorthanded rush which was a pretty ugly moment for the home team.  Outhustled, out worked and eventually scored upon as Jacob Trouba would literally skate by four Wild defenders before beating Dubnyk with a backhander.  4-1 game and suddenly the Jets felt like they could take this game back.  Winnipeg was attacking more recklessly now, feeling confident they could further cut into the Wild’s lead.  Minnesota didn’t seem to have much push back and seemed to play to just get out of the period with a 3-goal lead.

3rd Period Thoughts:  The Jets would press hard for a 3rd period rally but the Wild were skating well and taking away passing and shooting lanes.  Minnesota was also quick to transition and put Winnipeg on their heels defending in their own end.  The modified 4th line of Marcus Foligno, Brown and Eriksson Ek caused some trouble with great hustle and effort along the boards to give the Jets some fits in their own end.  The Wild were mostly content to cross the red line and sends pucks deep in Winnipeg’s zone and force them to come up the full length of the ice.  A blocked shot by Ryan Donato would turn into a scoring chance for the youngster as he unleashed a heavy snap shot that was gloved by Comrie.  Minnesota continued to force turnovers in the neutral zone and counter attacking as Brown intercepted a pass and he’d drop it back to Foligno who let go of a wrist shot that trickled through Comrie and slid just over the goal line.  5-1 Wild.  The Jets had pretty much given up at this point and the Wild were looking to pad stats in the closing minutes as they gave Nick Seeler and others the chance to shoot the puck.  The home crowd gave their team an appreciative ovation for a decent performance at home but you could tell on the looks of the faces of the players that the result was bittersweet.

LW – Brandon Duhaime (Providence, H-East) ~ the junior winger had a big day on Sunday with a goal and an assist on 2 shots in Providence’s 4-0 win over Cornell as they punch their ticket to the NCAA Frozen Four.  Duhaime has 11 goals, 33 points, 53 PIM’s, and is a +17 in 41 games.

RW – Shawn Boudrias (Cape Breton, QMJHL) ~ the 6’5″ power forward had an assist on the game winning goal in the Screaming Eagles 4-3 overtime win over Charlottetown clinching a series win in the process.  Boudrias has a goal, 4 points, and is a -1 in 6 playoff games.