Ronald Acuña Jr. Gets Paid, Braves Get a Bargain 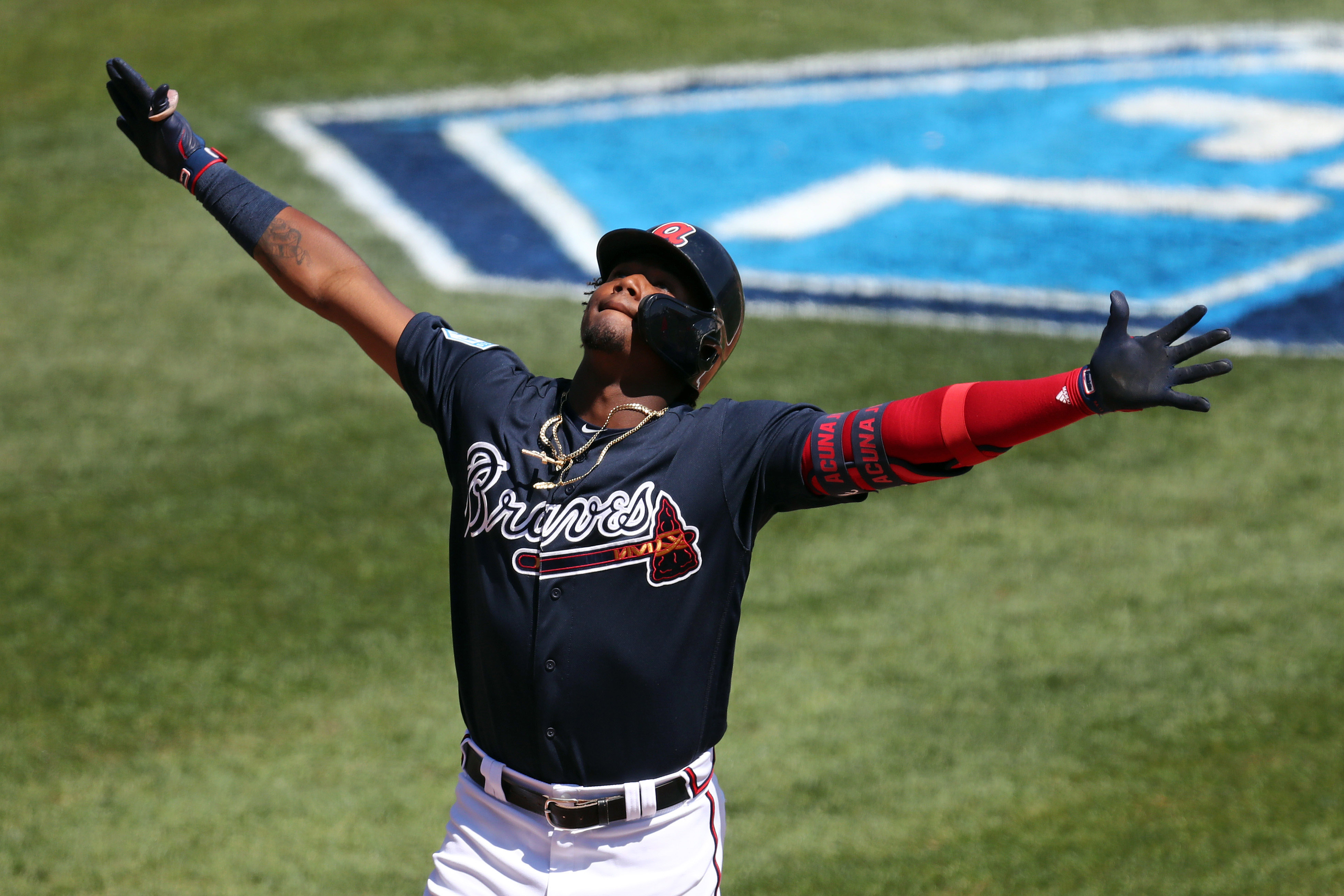 Ronald Acuña Jr. Gets Paid, Braves Get a Bargain

A lot has changed in 24 hours.

While a fun time was had on Twitter following Atlanta’s sweep against the Philadelphia Phillies by fans of Tiger Woods – possibly an inside joke – things in Braves land weren’t exactly super positive at this time yesterday. The Braves had a home opener to look forward to, but three straight losses to the rival Phillies, who outspent the Braves by about a zillion dollars this offseason, had even the most positive fans a bit disappointed.

But then the Braves won on Monday night with ease. Sure, the Cubs helped them along by going all Bad News Bears, but Braves fans rightfully laughed about that. After all, it’s not like the Braves were gifted a win. They shut the Cubs down and hit a couple of homers. One of those homers was by Ronald Acuña Jr.

The same Ronald Acuña Jr. with one of the most popular jerseys in baseball.

The same Ronald Acuña Jr. who was one of best prospects of the last five years before he got to the majors last April.

The same Ronald Acuña Jr. who smacked a Grand Slam in the playoffs and showed that no moment was too big for him.

And the very same Ronald Acuña Jr. who won the Rookie of the Year award at the ripe old age of *checks notes* TWENTY YEARS OLD.

Yeah, that guy. Well, that guy isn’t going anywhere else for a long time. That guy is finalizing a $100 million contract over the next eight seasons. Oh, and did I mention the two team options that could extend the value of the deal to $124 million? Because I feel like I should mention that. It kind of makes me happy.

While the exact details of the deal haven’t been released, we know a few things. Not only is the deal the second largest contract in Braves history (even without the options) to Freddie Freeman’s $135 million pact, it is the largest contract ever dished out to a player with less than a year of service time. We can also assume that $17 million, what Acuña Jr. gets if his option years are exercised, will be the biggest years in terms of salary. Which would mean that in base salary, at no point will Acuña Jr. match the salaries of Freeman, Josh Donaldson, Matt Kemp, or even Adrian Gonzalez in terms of individual salary commitments for a single season. I mean…sure…the Braves didn’t sign Kemp or Gonzalez and the latter spent about thirty seconds longer with the organization as I have, but the point still remains.

Now, this is a whale of a commitment by the Atlanta Braves for a player with *checks notes again* 115 career games. The largest contract given to a player with less than a year of service time was Eloy Jimenez’s $43 million. Even if Jimenez maxes out his contract with the White Sox, he’ll earn $75 million over eight seasons. Or less than what the Braves outfielder will receive before anything else is considered. But Acuña Jr. is younger, more established, and now richer and that’s not nothing.

Of course, there is risk. You get that with any contract. But the risk factor on these type of contracts hasn’t exactly been a problem generally speaking. Certainly, Acuña Jr. is getting an unheard of amount for a player with less than a year of major league service, but the Rays’ deals with Chris Archer and Evan Longoria (note: not Longoria’s current contract) turned out to be great deals for the team despite them having little track record to base the contracts on. Archer is in the final guaranteed year of his big first contract and it still ranks fourth for highest average annual value for a player with less than a year of service time. Recent contracts to Jimenez, Paul DeJong, Tim Anderson, Scott Kingery, and Brandon Lowe will need time to see how they play out, but outside of Jimenez, none of them can even see the ceiling Acuña Jr. has. That’s not a slight against DeJong and Co. That’s just how good Acuña Jr. is.

Even if you look at players with more than a year of service time, but less than two before they signed a multi-year extension, the failure rate on these type of contracts is quite low. The top five deals in annual average value for that group go to Andrelton Simmons, Christian Yelich, Gregory Polanco, Madison Bumgarner, and Paul Goldschmidt. None of those deals look bad. In fact, they look quite awesome. And while the next five aren’t quite as glowingly good (Ricky Romero and Jedd Gyorko are part of that group), it’s still pretty impressive how these deals rarely hurt the team. Again, $100 million is not nothing – especially for a team like the Braves. But it’s also stretched over eight seasons or an AAV of $12.5 million. That’s a price tag you can deal even if the unheard of happens and a group of cartoon aliens steal his talents.

But why did Acuña Jr. sign for so long? Well, remember that Acuña Jr. only signed for $100,000 as an amateur free agent. He wasn’t a big prospect at the time. Also, he would have earned slightly over the minimum for the next few years until he hit arbitration for the first-of-four seasons in 2021 before hitting free agency in 2024. While endorsements were going to help bring some immediate money his way, he was a long way off from making big-time cash. Getting the financial security now had to be important.

Nevertheless, if this deal goes the way everyone hopes, Acuña Jr. left a lot of moola unrealized. Now, Atlanta controls him through his Age-30 season rather than him hitting free agency before his Age-27 season. That’s when you’re in Manny Machado/Bryce Harper area if you have Acuña Jr.’s talents. And we all know how much money was dished out for those two. Also, let’s not ignore that salaries would rise over the next half-dozen seasons to the point that, when Acuña Jr. is making $17 million during his option years, he could have been making $40 million as part of a mega deal on the open market.

But there’s no substitute for comfort and happiness. Any potential bad feelings about manipulating his service time last year disappeared as the feel-good Braves won a division title with Acuña Jr. and Ozzie Albies smiling and having fun throughout. And of course, Ronald Acuña Jr. isn’t blind. He saw the off-season and the slow markets for Machado and Harper materialize. He can now shop for a home in the Atlanta area, set down roots, and focus on baseball without having to worry about making the minimum next spring or so on. He won’t have a fight in arbitration where the team tries to pay him less than he wants and finds inventive ways to attack his performance.

Instead, he gets paid and while it’s a great deal for the Braves, they are committing to him. They are showing Acuña Jr. that they believe in him. They could have paid him pennies on the dollar in 2020 and went through arbitration year-by-year. Like I said, it’s a great deal because they probably saved a small country’s GDP in arbitration and free agency for a small up-front cost. But they didn’t have to take any risk whatsoever. They chose to.

In the end, this is a great moment for Braves fans. Does it fix everything? No. Should the Braves still have spent more money this offseason to improve the bullpen? You bet. But does it feel damn good to have Ronald friggin’ Acuña Jr. signed until President Miley Cyrus takes office? You bet your sweet ass it does.