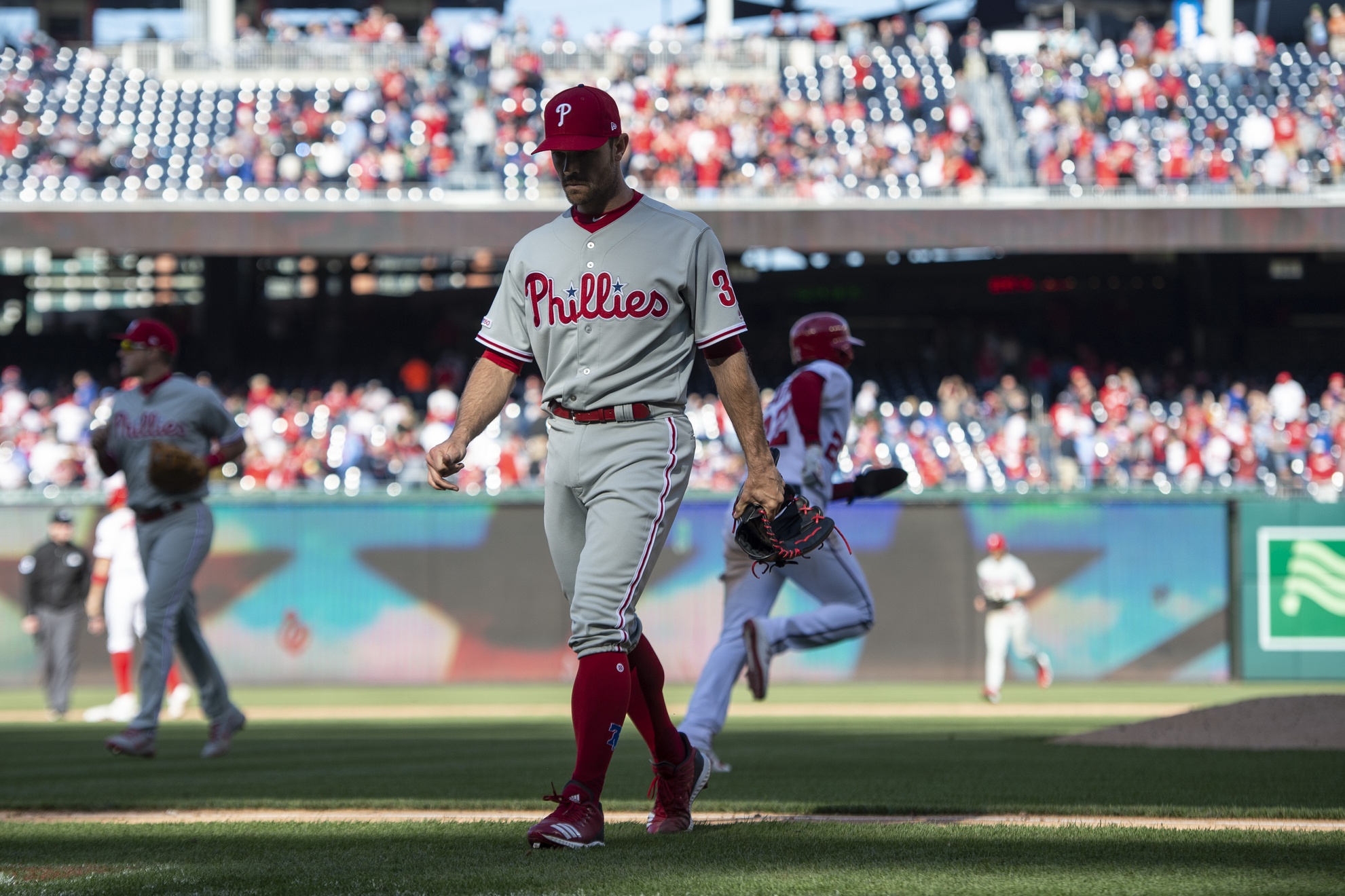 Well, we knew the Phillies would lose a game eventually, right? But did it have to go down like Wednesday afternoon’s game in Washington D.C. did? After the Phillies dug out of a rare hole dug by Aaron Nola early in the game to take a lead in the 8th inning, the Phillies were let down by a fielding error by Rhys Hoskins and a dreadful outing by David Robertson on the mound in the ninth inning. Robertson walked three batters, including the final one of the game to force in the winning run for the Nationals in a 9-8 setback for the Phillies.

What a bummer. But how did it all come down to this?

The game started off on a positive note with the Phillies coming out and scoring two runs in the top of the first inning, only to see Nola uncharacteristically give it right back by serving up three runs to the Nationals in the bottom of the first inning. By the end of the third inning, the Phillies were down 6-2 and Nola was taken out for a pinch hitter in the top of the fourth inning. But the bullpen came to the ballpark ready to get to work Wednesday afternoon and tied things down for the next few innings just waiting for the Phillies to get the bats going again.

After chipping away with a pair of runs to cut the deficit to 6-4 by the start of the eighth inning, Andrew McCutchen once again came up huge at the plate with a bases-clearing triple that was highlighted by Scott Kingery managing to avoid a tag at home plate for a run.

McCutchen would come around to score another run with some heads-up base running on a looper off the bat of Jean Segura.

At that moment, it just felt like the Phillies were destined to keep their undefeated start to the season going, but a quick run by the Nationals in the bottom of the inning against Seranthony Dominguez gave the Nationals life, and a fielding error by Rhys Hoskins on what would have been the third out allowed the Nationals to tie the game at 8-8 heading to the ninth inning.

Heading to the ninth inning and after using up a bunch of bullpen options already, Gabe Kapler turned the ball over to Dave Robertson, who once again struggled as he had in his previous outings since opening day. But this one cost the Phillies in a big way with a single and three walks allowing the Nationals to escape with the win.

It was a bummer, for sure, but at least Robertson and Hoskins were ticked off in their postgame interviews and not about to shy away from taking their respective blame.

So the quick two-game road trip ended on a sour note, but there were still some positives to take away from Wednesday afternoon. Most notably, the reassurance that this lineup is not going to pack it up and call it a day the moment things go south. After a quick 2-0 start and going into a slumber for the next few innings, the Phillies got into another bullpen and went to work against the Nationals. There is no quit in the lineup and bullpens have to be ready to take this Phillies lineup on. As we have seen in the first few games of the season, the Phillies could eat alive bullpens in the division this season unless the division improves their pens.

As I have been saying, the Phillies were going to be due for a loss. They were the only 3-0 team in baseball, let alone 4-0 and within outs of getting to 5-0, so a loss was going to happen. The first one always stings, I suppose, but let’s also try to keep some things in perspective. Compare the first five games of the season with the first five games of last season, and it’s already a complete reversal of fortunes.

And how about a couple more quick thoughts after the first loss of the season to keep your chin up?

I'm going to go out on a limb and suggest Aaron Nola doesn't give up six runs and get yanked after three innings too many more times this season.

The #Phillies didn't hit a home run in a game for the first time this season and they STILL managed to score eight runs. #PositiveVibes

The Phillies get a day off on Thursday before coming home for a weekend series against the Minnesota Twins.