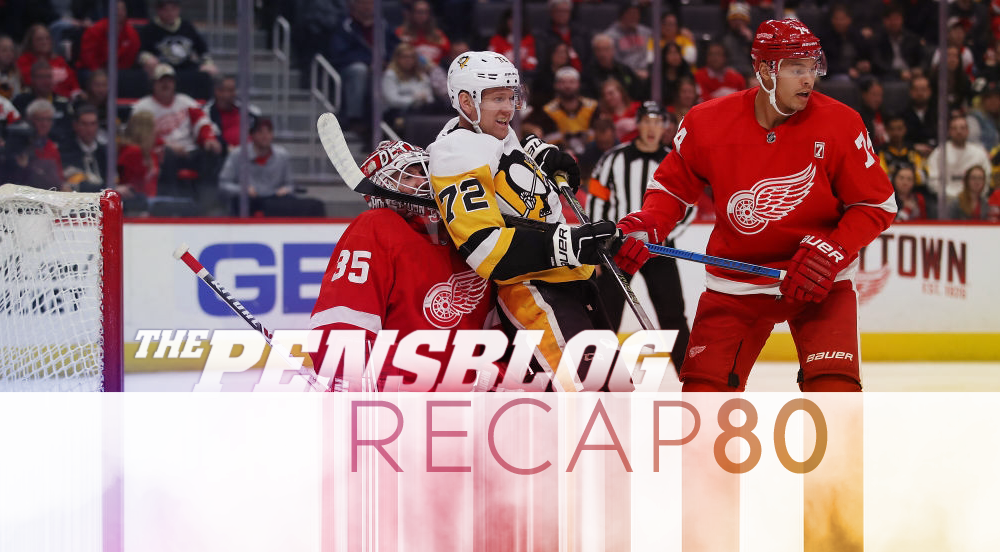 It’s April.  Spring is upon us, baseball just started, and the sun is starting to shine a little bit more each day.

But in the D, the it’s still one thing: cold.

See, the Penguins came into this on a heater.  They won a big, emotional over the Hurricanes on Sunday and on the heels of that, you’d expect them to burn through the 5th worst team in the league to clinch that playoff berth that was all but written off by large swaths of the population in November.

And from a possession standpoint last night, that’s what they did.

But where the Wings cooled the Penguins off was both in limiting their quality of chances and hitting them on the counter attack.

In fact, the Penguins managed to generate just 4 high danger scoring chances all game long at 5v5 and mustered just 2 high danger shots on goal against Jimmy Howard (3 at all strengths).

Translation: The Wangs took their chances.  The Penguins did not.

On top of it all, the Pens got next to no help last night either as Carolina moved back within two points with their 4-1 win over the Leaves while Montreal took down the Bolts 4-2.

Translation: Beat the Wings on Thursday and put this shit to bed.

Apparently the Penguins organization is an antivax group that gets all of their scientific information from Karen on Facebook and did not vaccinate the team from the fucking injury bug.  Joining Letang and Malkin on the shelf for this one was Brian Dumoulin, who is day-to-day with a lower body injury.  That meant the Zach Trotman Era became new again.  Other than that, HCMS made no other changes to the side that survived the light shower on Sunday night in a 3-1 win over the Canes.

Just 1:50 into the period, the Wings put themselves behind the proverbial 8-ball when Dylan McIlrath went to the box for shooting the puck over the glass to give us our first look at the new-look PP1, which put Bjugstad, replacing Hornqvist, and Guentzel down low while Crosby and Phil! manned the half-walls and Run the Jultz ran the thing.

It’s important to describe this in excruciating detail because they didn’t do shit with it.

Both teams were skating, but not really generating too much.  At the halfway point, shots were 5-2 Pens, who also had to go to the penalty kill at the halfway point with Blueger cutting a rut to the box for hooking some guy named Witkowski.

And early on in the PP, Matt Murray looked like he wasn’t going to be beaten on the night.

After a clearance that led to a controlled re-entry into the zone through Larkin dropping deep to get a head of steam through the neutral zone.  Watch here just before he takes the pass.  Rust drops off a little too much, reopening the passing lane to Larkin.  Athanasiou and Mantha cut through the middle of the ice, taking Cullen and Johnson with them.  This opens up the lane for Larkin to gain free entry into the offensive zone.

From there, the Pens are toast.  Cullen and Johnson are too far over on the other side of the ice and Rust was taken out of the play by the initial pass.  Johnson’s closing on Larkin plus Cullen leaving Athanasiou opened Athanasiou up to take Larkin’s pass and create a mini 2v1 against Maatta with Bertuzzi drifting in from the right wing.

Maatta does his best to try to take away the pass to Bertuzzi, but it was never going to be enough from there.

At first look, Murr looks like he makes the save.  But after a whistle and review, it was determined that the puck had crossed the goal line as seen through the webbing of his mitt.  Unreal effort from 30, but the lead up left him exposed.

Unreal effort by Murr to get over to get to this, but the webbing in his glove did him a disservice. pic.twitter.com/BEKY6hXIfc

Pens would be buzzing the rest of the period and controlled a bit more of the play, but that one goal looked like it would hold until the intermission.  That is until Phil! was tossed out with Crosby and Guentzel and after Murr turned aside a shot from the halfwall, they got their break.

Johnson would make up a bit for getting beat on the PPG, making a great stick check on Larkin on the opposite wall to free the puck up to Money Bag.  He beat Hronek to it and the pinch left him more exposed than a walk of atonement from the High Sparrow.

Jake gets his head up, finds Crosby, and lets 87 do the rest in vintage Crosby fashion.

Crosby’s ability to take 4 strides to explode past everyone and gain entry is damn near unmatched to this day.

Via Natural Stat Trick, the Detroit goal opened things up from being super low event 5v5 hockey to being wide open.  Pens thrived once it opened up, controlling the share of shot attempts, unblocked attempts, shots on goal, scoring chances, and splitting the high danger chances at 5-on-5.

HCMS opened up the 2nd period keeping Phil! on the Crosby/Guentzel line and moving Rust down to the RW with Blueger and McCann, but it was all one way traffic to start the period and it wasn’t the Penguins doing the driving.

Then, 5:04 into it, Dylan Larkin tripped up Jack Johnson to give the Pens their second PP of the night.

Again, the Pens didn’t do dick with it.  Phil! got himself a breakaway shortly there after, but fanned on the shot.

Pens continued to dominate the play following the PP, but were hit against the run of play.

This time, Jack Johnson made up for his good play by breaking the puck out to absolutely no one, missing his target on the stretch pass and giving possession back to the Wings.

Enter Madison Bowey, beating Phil! to the puck and reversing it to Larkin in support.  Larkin immediately retreats behind his own goal to where he had support for the breakout, taking Crosby with him and out of the play.

When Bowey gets the puck back in return, all 3 of Kessel, Crosby, and Guentzel are caught on the far side of the ice and before the Pens knew what hit them, Larkin cut across to Bowey to take a short pass and hit the blue line with speed.

Fortunately for Johnson here, he got off the ice to avoid getting a “minus,” but Larkin would find Helm nevertheless to feed Bertuzzi again on the back stick.

Not sure what was more impressive here on this goal: Larkin’s insane saucer pass that got up 3 feet and back down in such tight quarters, Helm’s reception of the pass and subsequent backhand sauce over Gudbranson’s outstretched stick, or Bertuzzi latching onto it and still getting enough on it to go shelf with it.  Really beautiful goal all around.

Following the goal, the Wangs took over for a bit before the Pens wrapped their hands around this game’s dick again, in spite of the best* efforts of some of their players.

In doing so, they nearly scoring another late-period goal with Crosby playing the creator and Guentzel playing the finisher this time around, but Money Bag shot the puck back into Jimmehhhh instead of finding twine.  Howard had no idea he made the save, but what a great audience in front of him to let him know.

By the time the 3rd period opened, the Dan Bylsma Bingo Ball line shuffler tool was dusted off and brought out for Sullivan’s use as he moved Simon up to the Crosby line to reunite The Electric Boogaloo Line, Rust down with Hornqvist and Bjugstad, and Phil! with Blueger and McCann.

Pens were dictating the play, but that didn’t mean Murray wasn’t called to action, having to bail everyone out after Athanasiou torched Johnson to latch on to an airmailed pass on one sequence and having to turn away Anthony Mantha after Guentzel nearly tied it up at the other end on another sequence all in the first half of the period.

But about two minutes later, the Wangs would extend their lead through Anthony Mantha with a little assist to the Pens inability to connect on a breakout pass again.

This time, it came from the stick of Erik Gudbranson, whose stretch pass to Simon was never going to come off.  Simon’s only option was to deflect it in deep, but Hicketts had the lane, angle, and headstart on Guentzel to win the race and dump it off to Hronek to absorb a hit from Simon and leave it for Larkin.

From there, Larkin knew what he was doing because it was about the 3rd or 4th time he did it in the game: drop a little area flip in behind the Pens D for his much faster wingers to win the race to against the Penguins much slower defensemen.  This time around it was Pettersson and Gudbranson being victimized instead of Jack Johnson by Anthanasiou earlier in the period (above) and one-on-one with the goalie, Mantha ain’t missing there.

Murr would vacate his blue paint for the extra skater with under 3 minutes to play, Pens would get set up, but they wouldn’t be able to do anything in the goal-based categories.

Mantha with the sealed deal from Detroit-Wayne.

Redemption City on Thursday with the chance to clinch still fully in the Pens favor as the Wings venture into PPG in the penultimate game of the season.  Do it.  Go Pens.