Recap: Hayward, Tatum come through in the clutch, Celtics win at Miami, 112-102 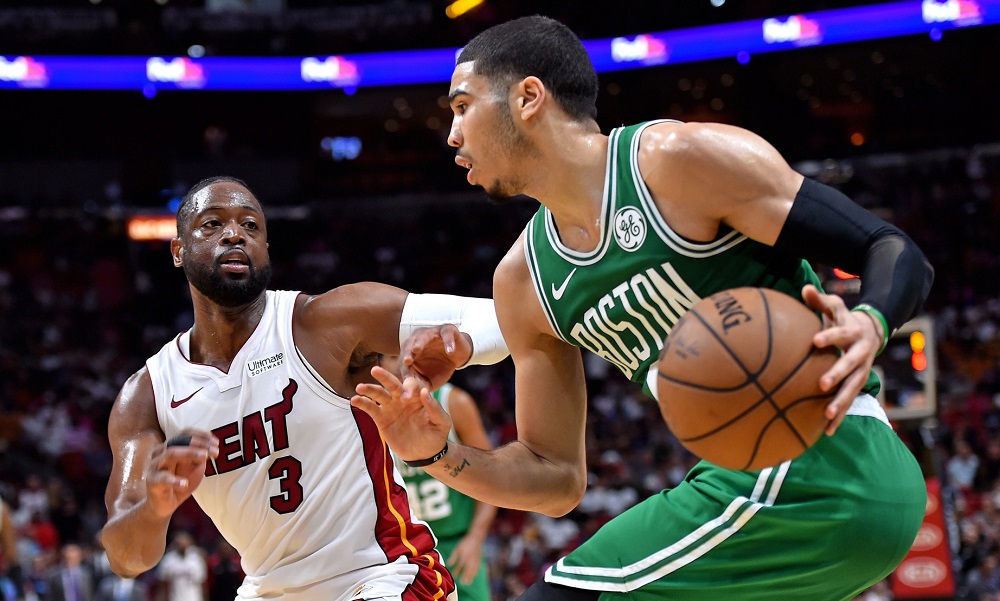 Recap: Hayward, Tatum come through in the clutch, Celtics win at Miami, 112-102

Maybe the Celtics will be fine in the postseason after all. They were tonight, at least, beating the Heat for the second time in three days, 112-102, at Miami. The Heat desperately needed the game in their chase for the East’s final playoff berth, and the Celts this season have had a bad habit of not matching opponents’ intensity on the road. Tonight, though, they responded with the effort and aggression that we’ve been expecting all season, and earned themselves an impressive W.

The turning point came in the middle of the fourth quarter when Jayson Tatum scored nine straight Celtics points to help the Cs build a 100-94 lead. They rode that all the way home. Taco Jay and Gordo combined for 20 points in the fourth.

The Celtics were without Jaylen Brown (back spasms) and Mook Morris (sore knee), which opened up playing time for Semi Ojeleye and Brad Wanamaker.

Like they did Monday, the Heat consistently employed a zone defense, but the Celtics attacked it successfully. The Cs repeatedly found open shots in the middle of the zone (they had 44 points in the paint) and by kicking it inside-out for threes (9 of 24).

It may not happen often, but Boston survived the 2nd and 3rd quarters on the road, with a combined 54-50 advantage over the middle 24 minutes. Celtics led by four at halftime and two entering the fourth.

The defense held Goran Dragic to just 11 points. He had 30 on Monday.

Terry Rozier made a three! And Marcus Smart did not attempt a three (except one when he was fouled).

It was Dwyane Wade’s final game against the Celtics, which he finished with 17 points, 7 rebounds and 6 assists. A highlight was scoring seven straight in the third quarter, but he also got T’d up for beefing with an official. Sayonara, Dwyayayayayane, we won’t miss you.

Miami owned the glass, grabbing 16 offensive rebounds that led to a 25-8 advantage in second-chance points. That kept them in the game on a night when they shot just 41.5%.

On Monday, Boston scored 15 straight points to take an early 17-2 lead. Tonight they opened the game with a 9-0 run.

Al Horford has scored at least 19 points for the sixth consecutive game, marking his longest such streak since doing so a career-high nine straight times during the 2012-13 season

Kyrie being a good guy:

Solid by Kyrie. These kids were on the floor to see some halftime warmups and Kyrie went over and went down the line as they were leaving. pic.twitter.com/tb1Rbp6LA4

Attacking the zone with ball movement: