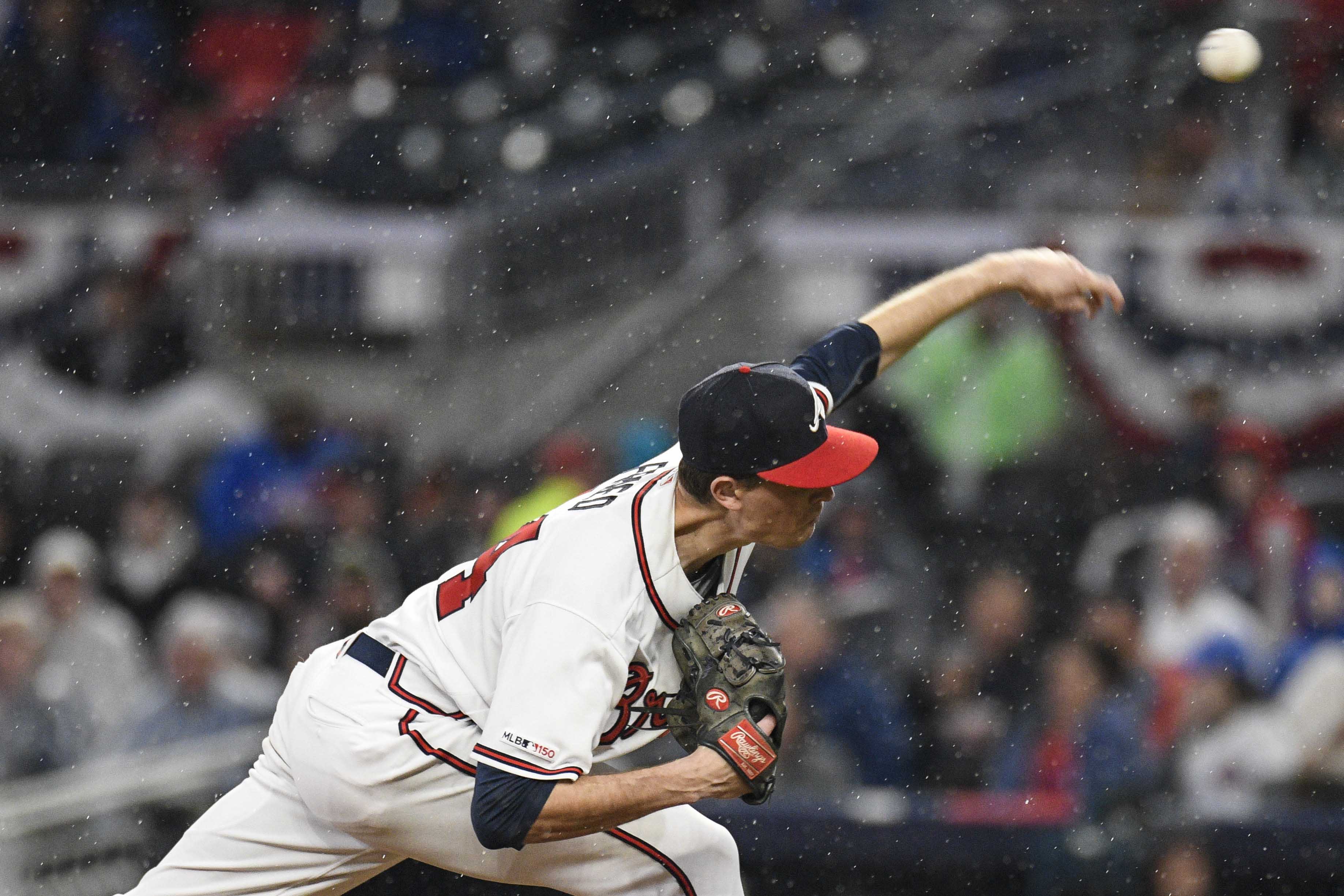 It’s called #TheMovement. Helped along by a pair of Talking Chop writers and those that took up the cause, Tiger Woods avatars took over Braves Twitter following last Sunday’s loss to the Philadelphia Phillies, dropping the Braves to 0-3. It’s not for everyone and I honestly still don’t get it because I’m too old for such tomfoolery, but you simply cannot argue the results. Since the avatars and Tiger Woods memes flooded Twitter, the Braves are undefeated. Right now, it’s hard to argue that Tiger Woods shouldn’t be the 2019 National League MVP. Just take a look at what Braves Twitter did the very active Cubs Twitter page following Wednesday’s win.

Thanks to @brandon_braves1 for the idea the other day pic.twitter.com/vmIJImmWLz

Follow my buddy Josh Sperry, by the way. He does great work.

The Braves broke up an early pitching dual with five runs in the fifth and rolled to a series sweep against the Chicago Cubs, who fell to 1-5 on the year. The Braves banged out 13 hits and were three outs away from a shutout before the Cubs threatened slightly in the ninth. Not too shabby.

Oh, and Max Fried was nearly perfect in his first start of the year. The Cubs didn’t get their first base-runner until the sixth with two outs when Mark Zagunis singled. Fried retired the next batter and was lifted after that, giving him a line of six innings, one hit allowed, zero walks, and five strikeouts. It was the best outing by a Braves starter this year and the first time any Braves hurler completed six innings of work. Shane Carle entered and threw two quality innings with a hit, a walk, and a K. Chad Sobotka came in to pitch the ninth and retired just one of the five batters he faced. Two of the four hits he surrendered were homers and he was charged with all four runs. A.J. Minter entered in his season debut and battled control, walking two, but also ended the game with a groundout and a strikeout to secure the win.

Offensively, the Braves were slow to figure out Yu Darvish, who was better than his previous start where he walked seven. But in the fourth, Atlanta got a rally going with three consecutive singles by Nick Markakis, Ozzie Albies, and Brian McCann. The last plated Markakis to put Atlanta ahead. And then the Braves got cute again. During the Phillies series, Dansby Swanson was called on for a squeeze bunt. He fouled it off, sacrificing a strike, and later struck out on a defensive swing with two outs. Last night, something similar happened. It looked like a safety squeeze and when Swanson missed the bunt, Ozzie Albies was too far away from third. The throw went down to Kris Bryant so Albies took off for home. He was tagged out at the plate, though the Braves rightfully challenged the call because Willson Contreras didn’t leave a open path to home plate, forcing a collision. But the umpires didn’t overturn the call and the rally was short-lived.

In the fifth, Atlanta got the offense going with the help of the Cubs pen, which was awful this series. After Ender Inciarte doubled and Josh Donaldson worked a walk, Cubs manager Joe Maddon removed Darvish, who visibly was not happy with the change. Carl Edwards Jr. then struggled to find the strikezone, walking Freddie Freeman, uncorking a wild pitch to score a run, and reloading the bases by walking Ronald Acuña Jr. That ended Edward Jr.’s night. Of course, had this game been played next year, he would have been forced to stay in to face at least a third batter. Tyler Chatwood entered and served up a bases-clearing double by Nick Markakis where Acuña Jr. blew through a stop sign to score. Swanson later brought Markakis home with a base hit.

Atlanta added to the lead with a Brian McCann sacrifice fly on a great catch by Albert Almora in the seventh. In the following inning, Freeman singled and Acuña Jr. reached on catcher interference. With two outs, Markakis smacked another double to score both runs.

I mentioned him a few times above, but Nick Markakis had a game. After four hits in five games entering the contest, he picked up five hits – including three doubles after failing to hit an extra base in the 21 PA before Thursday. His effort increased his OPS from .496 to .923.

It was the second time in his career that he had five hits in a game. Funny enough, the first time came on July 3, 2011 as a member of the Baltimore Orioles at Turner Field. The O’s won that game 5-4 with Markakis singling twice and doubling once against Brandon Beachy. He also picked up singles against Scott Proctor and Scott Linebrink. Jason Heyward, now a member of the Cubs, went 0-for-5 for the Braves. Brian McCann, who played yesterday, had two singles.

-Rome won 9-1 at Kannapolis: Last summer’s 12th rounder, Nolan Kingham, tossed five scoreless in his first start at A-ball while Brendan Venter, selected a round after Kingham, had four hits, including a double and a homer. Trey Harris also had three hits, including a homer, while Justin Dean led off the season for Rome with an inside-the-park homer. Kurt Hoekstra, who is being moved from a utility infielder to pitcher, struck out four in 1.1 to close things. Darling Florentino, one of the most aggressive promotions by the organization as he doesn’t turn 18 until May 25, picked up a single in his first game at A-ball.

-Florida won 5-1 at Daytona: The Fire Frogs scored four runs in the ninth to break up a tie. Izzy Wilson’s three-run triple in the ninth was the big blow. Greyson Jenista got a surprise start in center. A.J. Graffanino left the game in the top of the fourth. Unsure what prompted that. Huascar Ynoa got the start and threw four hitless innings. He did walk three, but also K’d 6. Keith Weisenberg kept the no-hitter going with a quick inning of work, though Daytona got two hits off Sean McLaughlin. Walter Borkovich gave up a run, but also got the win.

-Mississippi lost 7-5 at Tennessee: Ian Anderson struck out seven over four innings, but the bullpen got blitzed with the quartet of Michael Mader, Jason Hursh, Phil Pfeifer, and Josh Graham allowing at least one run each and six total. Drew Waters led off and reached base four times with two singles, a double, and a walk. Cristian Pache picked up a triple and Alejandro Salazar had two hits.

-Gwinnett won 3-1 vs. Norfolk. Mike Foltynewicz was nearly as perfect as Max Fried was for the major league squad, tossing five hitless frames. He did walk two and struck out a pair over 56 super efficient pitches. Thomas Burrows got the save, though he did allow a run. Corbin Clouse K’d 4 in 1.2 innings. Rafael Ortega had three hits, finishing a triple short of the cycle.

-We sometimes forget that Max Fried was once a top prospect, too, and that’s something we shouldn’t ignore as more top pitching prospects cycle up to the majors. Fried has also had some success in the majors with a 2.94 ERA over 67.1 innings, including 71 K’s. By no means, am I suggesting that Fried will have a better career than Mike Soroka, Luiz Gohara, Bryse Wilson, Touki Toussaint, or even Kyle Wright – though it’s quite possible. In the end, he’s earned this spot. Let him roll.

-As expected, Wilson got demoted yesterday for Minter. Another move will be needed today as Kevin Gausman starts for the Braves against the Marlins. My bet is Josh Tomlin.

-I leave you with this high curveball from Fried. Seriously, what is that voodoo?